Fritz (Friedrich Moritz Michael) KOLLINSKY was born in Prague (in what was then Austria-Hungary and is now the Czech Republic) on October 23, 1875. He was the son of the Jewish couple Helene Kollinsky née Durst and Isidor Michael Kollinsky from Vienna. The Kollinskys were related to the Naschauer industrialist family because Michael’s sister was Jenny Naschauer, who had been Jenny Kollinsky before she married into the Naschauer family. Jenny Kollinsky Naschauer’s daughter Julie, Fritz KOLLINSKY’s cousin, married Theodor Herzl, which made Fritz a cousin by marriage of Theodor Herzl the leader of the Zionist movement (who had been a judicial intern in Salzburg when he was young).

Fritz made his career in Berlin and rose to become director and member of the board of directors of the Schenker & Co transportation and insurance company that had its headquarters at 39 Unter den Linden. In May 1925 the 49 year old Fritz married the non-Jewish Gertrud Ulbricht from Halle an der Saale, who was about 33 years old. They had a son who was also named Fritz, born in Berlin on June 15, 1926. The family lived in the Berlin district of Charlottenburg-Wilmersdorf, near the shopping district on the Kurfürstendamm.

In November 1930 Gertrud Ulbricht Kollinsky acquired the Villa listed in the land register as Number 7 (EZ 709) in Salzburg-Maxglan, with the street address 17 Moosstraße. In January 1931 the family moved from Berlin to Salzburg. The Salzburg registration records state that Fritz Kollinsky was an Austrian citizen and was a member of the Evangelical Lutheran Church like his wife. His Jewish origins were not indicated in any way.

How then did the Salzburg Gestapo discover after the 1938 Anschluss that Fritz KOLLINSKY was a Jew according to the Nuremberg Racial Law of 1935? Apparently it was from a notice arriving from Berlin in April 1938 stating that the former manager’s contractual lifetime pension from the Schenker company (which had long been attacked by Antisemites as Jewish) had been revoked – an existential threat for the family. They had to make a declaration of assets – the basis for the »Aryanization«, that is the theft, of their property.

The family was subjected to the terror of the Gestapo in Salzburg – blow after blow:

• Fritz KOLLINSKY was charged with »Rassenschande« [racial defilement] under the Nuremburg Racial laws – despite the fact that his marriage to an »Aryan« woman had taken place a decade before the law prohibiting it had been passed (proceeding Vr 2620/38 in the Salzburg State court).

• KOLLINSKY´s arrest on November 10. 1938 during the anti-Jewish action known as the Reichskristallnacht Pogrom – and his three weeks imprisonment in the Salzburg police jail while all the family’s valuables were confiscated [stolen] including the family jewelry worth 20.000 Reich-marks in the house at 17 Moosstraße

• KOLLINSKY was only released upon payment of a security deposit of another 17.000 RM and with the condition that he leave Salzburg within 24 hours.

Under pressure from the Salzburg Gestapo–run by Karl-Heinz Rux, who was made an SS-Sturmbannführer [Major] on November 9, 1938 – Gertrud Kollinsky had to sell her house even though she was an »Aryan« according to Nazi racial classifications [because she was married to a »racial Jew«]. She also needed money badly in order to care for her husband and child as their income had been cut off. On December 5, 1938 the entire family fled to Berlin where they found shelter. Gertrud Kollinsky wrote in a March 17, 1951 report:

In Berlin my husband had to report to the Gestapo every 14 days. In November 1939 he was compelled in the Gestapo-building on the Börse [28 Burgstraße: the Jewish Department of the Berlin Gestapo] to sign up for hard labor that was cause of his early death. The workplace was 1 ½ stories below ground level with no daylight where foreigners and Jews had to work. Their pay consisted only of rations [for their forced labor] from 7:30 in the morning to 7:00 in the evening. These »rations« led to his complete collapse. He was released from work, he could only get around in a wheelchair, and he died soon after from famine edema in the Paul-Gerhart-Foundation hospital in Berlin.

On August 29, 1945 the 69 year old Fritz KOLLINSKY died in Berlin from the effects of forced labor and torture. In addition, the 54 year old widow and her 19 year old son Fritz had lost all of their belongings in the battle over Berlin. Where could the two turn in their hour of need? She still had some good friends in Salzburg, where she was able to live in a garden house for a few years after their return to Salzburg in October 1945. In the early 1950s the widow was granted a victim’s aid pension. Their son Fritz was able to study in Germany and became a chemist there.

In 1969 Gertrud Kollinsky was able to inter the urn of her husband in Salzburg. In 1977she died at age 85 and in 2002 their son Dr. Fritz Kollinsky, was also interred in the Salzburg Municipal Cemetery. 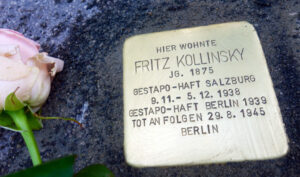 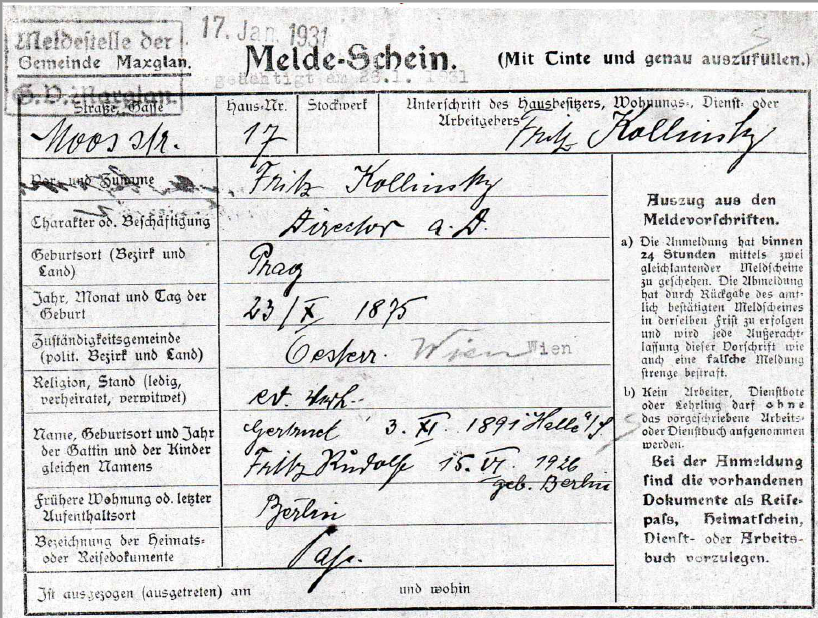 All stumbling stones at Moosstraße 17