Eleonore STÖCKL was born Riedau, in the Schärding district of Upper Austria, on April 3, 1887. She was an unmarried Catholic who had one child, Gertrud, who had been born in Salzburg in 1918.

Frau STÖCKL was incapable of learning a skilled trade and worked as a servant and nursemaid in Salzburg. She lived at 10 Späthgasse.

Frau STÖCKL was admitted as a patient in Salzburg institutions on several occasions before she was finally taken in by the Schloss Schernberg in Schwarzach nursing home (in the Pongau region of Salzburg) in June 1931. This nursing home was run by the Merciful Sisters of St. Vincent de Paul.

The regional administrator of the order, Anna Bertha Königsegg, bravely opposed the Nazi »euthanasia« program to murder the handicapped, but when she was arrested by the Gestapo on April 16, 1941 the order’s handicapped patients lost their defender. Her co-workers were able to rescue 17 of them anyway, but most were causght in the Nazi’s nets.

The 54 year old Eleonore STÖCKL was one of the 115 patients who were deported from Schernberg to the Hartheim killing center near Linz on April 21, 1941 – where they were murdered.

As with all the other victims of the Nazi’s secret »T4«1 program to murder the handicapped, her death was not recorded in the Salzburg city police registration files.

Research into the fate of her daughter Gertrud has failed to turn up any information and no surviving family members are known to have existed.

1 »T4«: It was called this because its main headquarters in Berlin were located at Tiergartenstraße 4 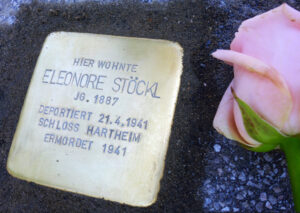 All stumbling stones at Späthgasse 10