Sonia HERZENBERGER was born in Auschwitz-Birkenau on April 17, 1943. She was one of the 366 registered infants in the »Gypsy Family Camp« who were tattooed on the thigh or buttocks with a »Z« number [»Z« for »Zigeuner«, a German word for Gypsy that had a strongly negative connotation].

Research indicates that Sonia was the sixth child of Therese Herzenberger, who was registered entering the »Gypsy Family Camp« Section B II e of Auschwitz-Birkenau on April 3, 1943. Therese Herzenberger was 31 years old and very pregnant when she was deported from the Salzburg »Gypsy Camp« to Auschwitz along with her children Willy, Rosa, Rudolf, Anton and Agathe, her life partner Lambert and his mother Pauline Blach.

Six of the nine murdered family members were among the Gypsy extras that Leni Riefenstahl rented from the camp for her film Tiefland.

Since August 2008 there has been a Stumbling Block memorial near the site of the Salzburg »Gypsy Camp« for Agathe HERZENBERGER, Sonia’s Salzburg born sister who was murdered in Auschwitz before her second birthday. 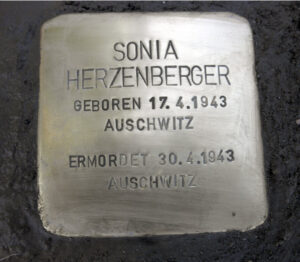 All stumbling stones at Schwarzgrabenweg