Josef HAIDINGER was born in the Upper Austrian village of Pöndorf am Hausruck (about 35km northeast of Salzburg) on February 15, 1898. He was a married Catholic foreman who worked for the Austrian National Railway (ÖBB). He and his family had local citizenship rights in the municipality of Gnigl where they lived in a home they owned at 13 Josef-Waach-Straße near the Salzburg marshalling yards. The Gnigl municipality, which included the Itzling neighborhood where they lived, had a Social Democratic railroader for its mayor until the Social Democratic party was banned by the Austrian dictatorship in February 1934, and it was incorporated into the city of Salzburg in 1935.

HAIDINGER was a member of the Social Democratic Labor Party and its party militia, the Republican Defense League, as well as being an active trade unionist and chairman of the Workers’ Gymnastics and Sports Union of Gnigl. That is, until all of them were outlawed by the Austrian dictatorship in February 1934. When the police confiscated a copy of the Republican Defense League’s local »Emergency Plan« they found the names of 47 activists listed on it, including the railroaders Franz ASCHENBERGER, Josef HAIDINGER and Josef KUMHART — none of whom joined the resistance network of the Austrian Revolutionary Socialists (RSÖ) that was formed after the Austro-fascists banned the Social Democratic party.

But after Nazi Germany invaded the Soviet Union ASCHENBERGER, HAIDINGER and KUMHART joined the »Reichsbahn [German National Railway] sub-section« of the Austrian Communist Party (KPÖ)’s resistance movement that Franz OFNER and Anton REINDL had re-activated. In the summer of 1940 Josef HAIDINGER was recruited into the KPÖ by Anton REINDL, and Franz OFNER made him responsible for developing a resistance network along the railway lines that centered on Salzburg. After intensive recruiting among the workshop and dispatch employees HAIDINGER became the leader of the »Reichsbahn sub-section« and the »Reichsbahn Workshop local« while the train conductor Franz ASCHENBERGER became treasurer of the »Reichsbahn sub-section« and leader of the »train personnel group«. Given the high degree of organization of the railway workers it isn’t surprising that they were the largest group in the Communist resistance — with more than 40 activists who were prosecuted by the Nazis — and the railroaders also provided another 60 activists who were prosecuted for being members of the Salzburg organization of the Austrian Revolutionary Socialists.

Although the two networks were unable to merge and strengthen their resistance capabilities, the two competing groups were considered especially dangerous by the Nazi regime because of the strategic significance of the railroad network during wartime — especially after the attack on the Soviet Union — and that’s why there were so many death sentences. The Communist railroaders were seen as especially dangerous and that’s why they outnumbered the socialists in death sentences even though theirs was the smaller resistance group.

In August 1941 an undercover Bavarian Gestapo agent named Josef Kirschner moved to Salzburg and managed to infiltrate the resistance network. That enabled the Gestapo to round up the members of both resistance groups at the begining of 1942. They began with the activists in Salzburg but were able eventually to round up and smash the entire multi-regional network. In order to prevent any such resistance movement ever being organized again the Gestapo not only arrested their wives, they deported nine wives from the Communist locals in Gnigl, Itzling and Hallein from the police jail to be murdered at Auschwitz without any pretence of a judicial process.

At least 79 activists were killed in concentration camps or prisons, or died after the liberation from their abuse there — including 29 railroaders from the city and state sections of the two resistance organizations. After the defeat of Nazi Germany the Gestapo agent Josef Kirschner, »who is known to the court from numerous proceedings to be an extremely efficient and resourceful officer«, managed to go into hiding and disappeared without a trace.

It is not well known that the so-called »People’s Court« of Berlin held trials in the Felony Courtroom of the Salzburg State Court, but the 2nd and 6th Senates [sections or benches] did so with »People’s Court Counselor« Walter Hartmann presiding. On November 3, 1942 four KPÖ activists were sentenced to death: Franz ASCHENBERGER, Josef HAIDINGER, Johann ILLNER and Franz PÖTTINGER. Only a few portions of the judicial records still exist: a Gestapo investigation report on the illegal Communist organization in Salzburg, arrest orders from the investigating judge with a list of railroaders — with Josef HAIDINGER in first place as primary defendant, and the death sentence of the »People’s Court« with Walter Hartmann presiding. None of these suggest any suspicion that the defendants possessed any weapons or engaged in any sabotage, it is clear that the key point for the regime was simply their membership in a Communist organization at the National Railway. This is clear in the grounds given for the death sentences of HAIDINGER and ASCHENBERGER:

You were both higher functionaries. Haidinger political leader, Aschenberger sub-section treasurer. Your successful propaganda created a great danger recruiting in the end 40 to 50 members in the vital transport network of the German National Railway. You were national civil servants who swore a loyalty oath to the Führer, but you still stabbed in the back the fighters at the front. Any personal mitigating circumstances can’t begin to counterbalance that. Both defendants have forfeited their lives and honor.

The »People’s Court« generally dealt with charges like those the accused had already confessed to during Gestapo interrogations: membership recruiting and paying contributions which counted as preparing or agreeing to conspire to commit high treason. Josef HAIDINGER, who had been under arrest since January 17, 1942, and Franz ASCHENBERGER, who had been under arrest since February 12, 1942, were both sentenced to death for »conspiracy to commit treason« by the 2nd Senate, known as the »Bloody Senate«, in the Felony Courtroom of the Salzburg State Court on November 3, 1942. On May 11 1943 they were decapitated in the Munich-Stadelheim prison: ASCHENBERGER was 44 years old and HAIDINGER was 45.

Josef HAIDINGER´s widow Maria was eligible for victims’ compensation in liberated Austria and died at age 79. Their daughter Rosa left Salzburg. On the initiative of the Salzburg State section of the Austrian Association of Concentration Camp, Prisoners, and Politically Persecuted the bodies of their comrades Franz ASCHENBERGER, Josef HAIDINGER, Rudolf HARTL,Leopold HOCK, Franz PÖTTINGER, Josef THALHAMMER and Josef WARTINGER who had been murdered in Munich-Stadelheim were exhumed from the Forest Cemetery in Munich-Perlach and on November 1, 1950 they were ceremonially reburied in the Salzburg Municipal Cemetery with the participation of the Gnigl pastor Franz Dürnberger. And in the »memorial year« of 1988, an Anti-Fascist Committee proposed that a street in Gnigl be named after the executed railroader Josef HAIDINGER and the city of Salzburg agreed. 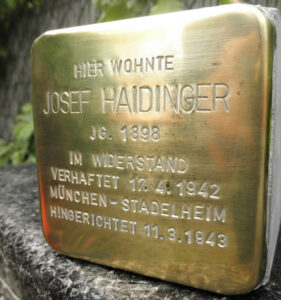 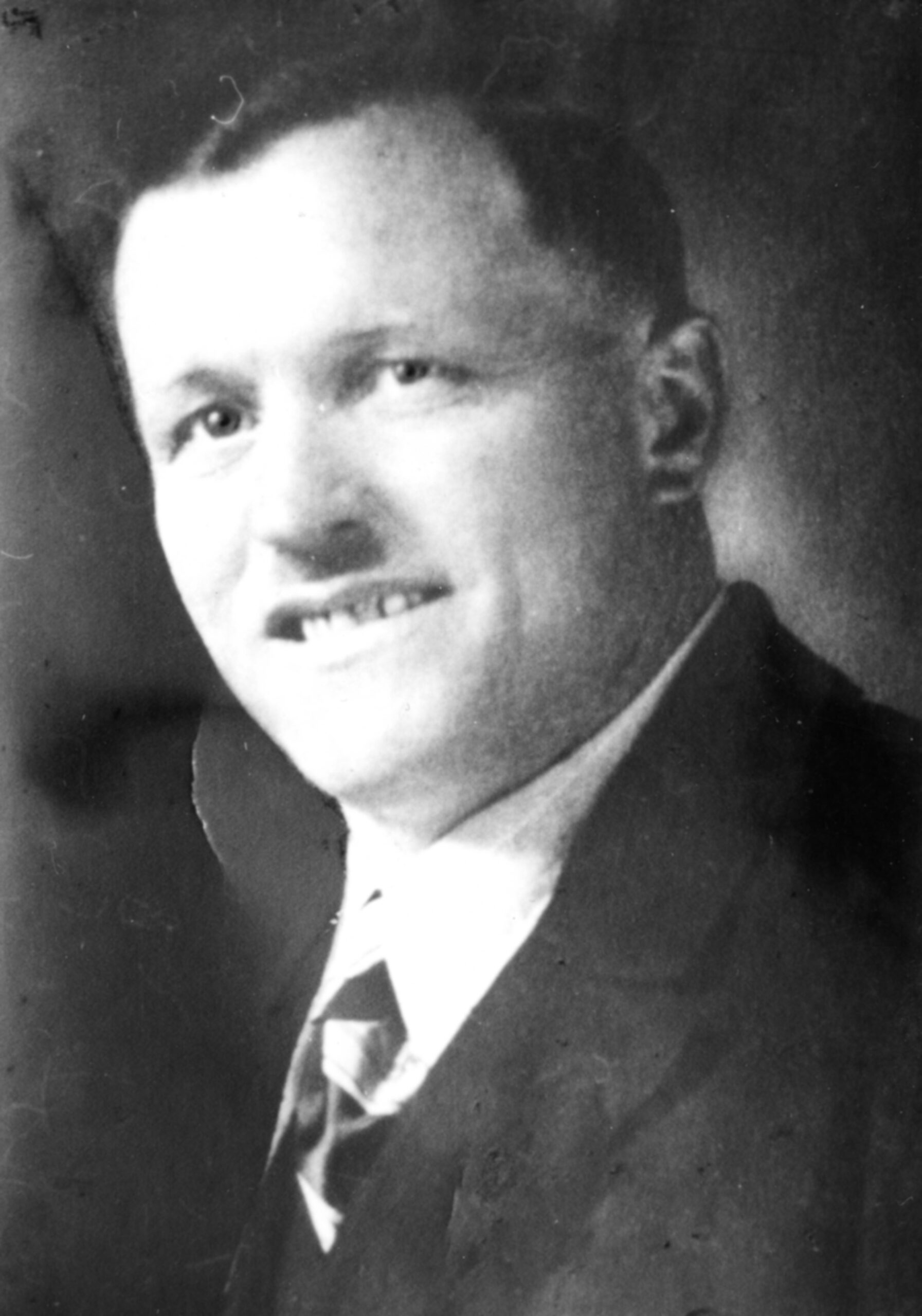 Josef Haidinger
Photo: Archive of the Communist Party of Austria 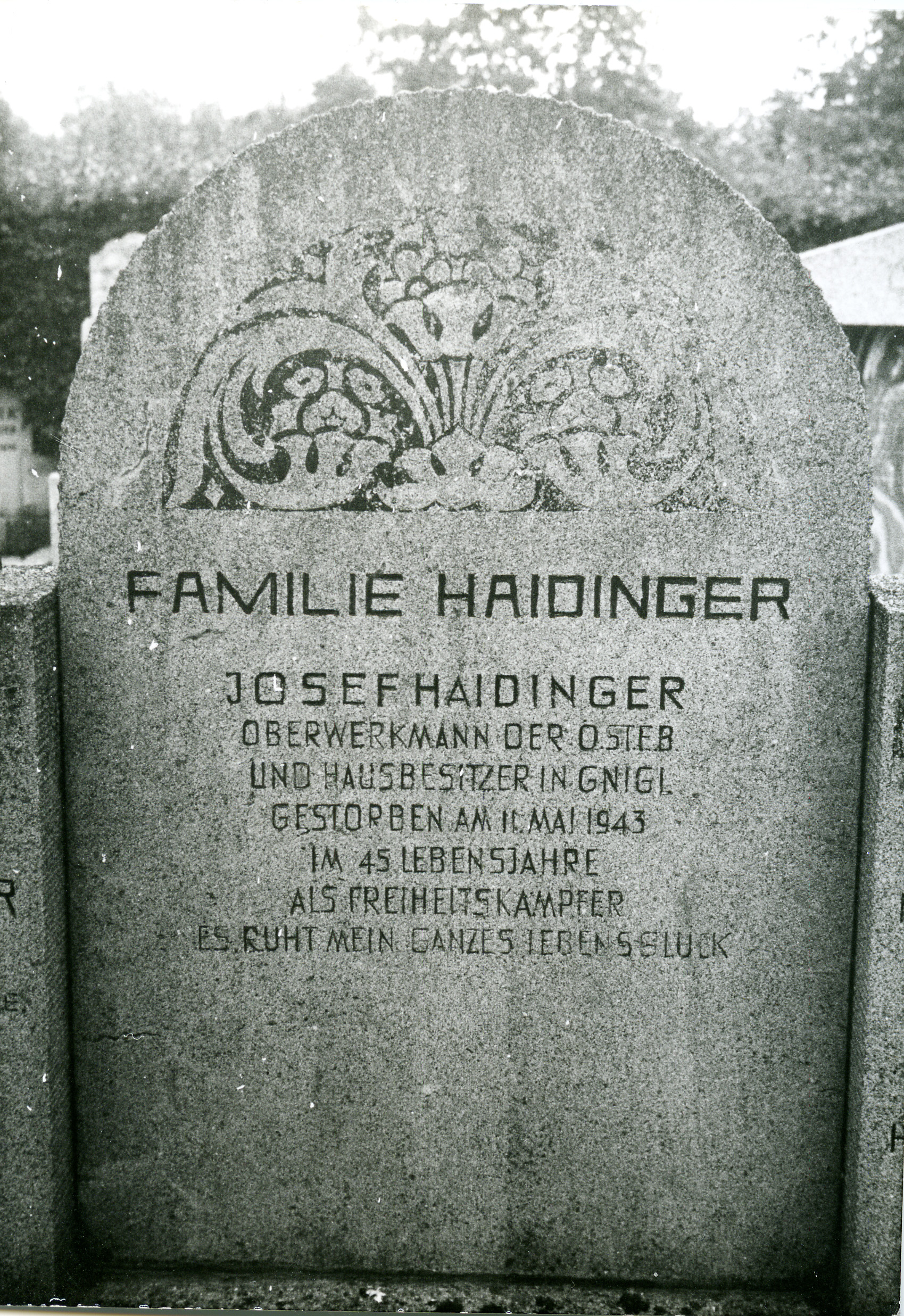 All stumbling stones at Josef-Waach-Straße 13