Richard LÖWIT was born in the small Bohemian town of Chotebor (which was then part of Austria-Hungary, but became Czechoslovakian in 1919 and is now in the Czech Republic) on January 6, 1870. He was a child of the Jewish couple Josef LÖWIT and his wife Theresia (née Rosenfeld). Josef was a primary school teacher. They moved to Vienna and lived in the Rudolfsheim suburb which was incorporated into Vienna in 1890. The grave of Josef and Theresia is in the Jewish section of the Vienna Central Cemetery. Richard’s sister Berta LÖWIT was buried in the same plot in 1927.1

Richard LÖWIT trained as a stenographer, but studied acting with Pauline Loewe and took the stage name Fritz RICHARD. At first he acted in German and Austrian provincial theaters, including a season at the Salzburg City Theater. His police registration card records his religion as »Mosaic«, meaning Jewish. In 1898 he married the actress Friederike Raithel in the Bohemian town of Teplitz (Teplice) – at which time he claimed no religious affiliation.

Friederike and Richard LÖWIT made part of their careers in silent films under the stage names Frida and Fritz RICHARD. They generally appeared in secondary roles and sometimes appeared together in major films like Schinderhannes in 1928 (after a play by Carl Zuckmayer). They lived in Berlin and mostly acted in Berlin theaters. They were members of Max Reinhardt’s ensemble and that brought them to the Salzburg Festival starting in 1920: Fritz RICHARD played the poor neighbor in Everyman, Fleurant in The Imaginary Invalid, the doctor in Turandot, Philostrat in A Midsummer Night’s Dream and as a servant in Stella.

The actress Frida RICHARD shined in mother roles and made a great impression as Everyman’s mother at the Salzburg Festival. In September 1931 the Salzburger Volksblatt reported that Frau Frida RICHARD, the mother of Everyman, had bought the country home of Countess Alexandra Paschkoff and had settled in Salzburg.

The property register recorded that Frida and Richard LÖWIT had purchased house number 31 in Parsch (which was then part of the separate town of Aigen) together in September 1931. The LÖWIT family was officially registered there starting in June 1932. In August 1932 Fritz RICHARD played his usual role in Everyman. The last place he worked was at Max Reinhardt’s theater in Berlin, when he lived at 5 Hillmannstraße in Berlin-Hermsdorf.

On February 9, 1933, shortly after Hitler took power in Germany, the 63 year old Richard LÖWIT died in Berlin. An obituary of the well known film and theater actor might have shed some light on how he died, but there was none. Contemporaries who missed him had their suspicions, and rumor had it that Fritz RICHARD came to a violent end in Nazi Berlin – that he had been beaten to death in the streets by Nazi Storm Troopers. A violent death can’t be ruled out, but so far no evidence of one has been found. Of course it is understandable that his survivors in Salzburg, his widow and three daughters, sought safety in discretion. Even the family’s real name was generally unacknowledged in Salzburg because LÖWIT was a Jewish name.

Frida RICHARD’s good friend Friderike Zweig understood her secretiveness because she too had something to hide – her own Jewish ancestry and that of her first husband who had converted to Catholicism. Her two daughters had been baptized Catholic as infants, but they lived with her in the Salzburg home of Friderike’s second husband Stefan Zweig, a man who was shunned by Salzburg society because he was Jewish, despite his fame as one of the leading authors in the German speaking world. Contrary to his usual practice Zweig remained in Salzburg in the summer of 1933 and on two occasions he was the guest of Frida RICHARD.

The first time he was in the company of International PEN-Clubs president H. G. Wells and his companion Moura Budberg, (who was the former companion of the Russian author Maxim Gorki). They presumably talked about the recent book burnings and other events in Germany, but unfortunately nobody left any record of their discussion. Frida RICHARD’s company must have pleased the shy Zweig because he accepted another invitation. A film shot in Frida RICHARD’s garden shows Zweig in the midst of Salzburg Festival artists trying to hide his obvious discomfort with a smile. In February 1934, just six months later, an embittered Zweig left Salzburg after the Austrian police searched his house for weapons despite his fame as a pacifist.

Until 1937 Frida RICHARD continued to play the mother in Everyman and the witch in Max Reinhardt’s production of Faust. In this period she also appeared in Austrian films – playing her last Austrian film role as the mother in Anzengruber’s Der Pfarrer von Kirchfeld in 1937. That was the last Austrian film production entirely free from Antisemitic directives and thus involved Jews and anti-fascists like Jakob and Luise Fleck, Friedrich Torberg, Arthur Gottlein, Hans Weigel, Ernst Mühlrad, Hans Jaray, Karl Paryla and Ludwig Stössel – all of them were driven into exile by the Nazi regime, while the producer Siegfried Lemberger and the cameraman Ernst Mühlrad were murdered in the Holocaust.

From 1938 to 1945 art had to serve the Nazi-Regime and Frida RICHARD appeared in secondary roles in 14 German films, including Gustav Ucicky’s Ein Leben lang (1940), Veit Harlan’s Die goldene Stadt (1942) and Leni Riefenstahl’s Tiefland (which was shot in 1940/41 with prisoners from Salzburg’s »Maxglan Gypsy Camp«). Today we know that the twenty-five »gypsies« who Riefenstahl rented from the SS to play »Spanish« extras in her film Tiefland were murdered in Auschwitz-Birkenau – though they were still in Salzburg at the time because the Nazi’s »race scientists« hadn’t yet decided what should be done with these people who were literally Aryans.

But what did Frida RICHARD know at the time? What could she not know, or not want to know? In her circles they at least knew about the leading man in Ein Leben lang, the popular actor Joachim Gottschalk who had been blacklisted from acting because he refused to separate from his Jewish wife and son. Finding no other way out, the Gottschalk family committed suicide together. When Frida RICHARD’s friends heard about that they were shocked and feared what would happen if their own secrets became known.

The LÖWITs had, as we already noted, three daughters: Stella, Frieda and Gertrud. They had different fates. Stella, the oldest, left Salzburg in time with her daughter Marianne who had been born in 1928, and reached New York on December 30, 1939. In April 1945 they became US citizens. Frida RICHARD’s second daughter Fritzi (Frieda) was married and lived alternately in Salzburg and Vienna. In November 1938 she was registered in her mother’s house when she fled to France, presumably with her husband.

All Frida RICHARD was able to learn about her fate was that Fritzi had later been deported by the Nazis to Poland, and she kept hoping for her return. The married name of the missing seems to have only been known by the surviving family members in Salzburg – who kept their grief private.

Gertrud, the youngest daughter remained in Salzburg under the Nazi regime along with her son Robi who had been born in 1926. The police registration files indicate that Gertrud and Robi lived in Frida RICHARD’s house. Gertrud LÖWIT had apparently tried to hide her paternal Jewish ancestry although her official registration card listed her as a »Jewish half-breed, 1st class«.

This could have had fatal consequences if it had been noted by the Gestapo: the actress Margarethe Etlinger who had come to Salzburg from Berlin had also tried to deny her paternal Jewish ancestry and was mudered in the Ravensbrück concentration camp when her deception was discovered. In this case Gertrud and her son Robi were able to survive the terror years in Salzburg under the protection of Frida RICHARDS and lived to witness Salzburg’s liberation by US soldiers in May 1945. They moved to the US at the beginning of the 1950s.

The 72 year old Friederike LÖWIT, called Frida RICHARD, died on September 12, 1946 in Salzburg. Until her death she had hoped that her daughter Frieda had survived the Holocaust and would come home, as is demonstrated by Friederike LÖWIT’s testament of June 21, 1946 where she named her daughter Frieda as one of her heirs. A year later, on September 15, 1947 a judicial decision held that Frieda was dead.

This document is the first one that lists Frieda LÖWIT’s married name, SCHABLIN – and her link to Judaism which makes it possible to trace her fate. Frieda was married to a Prague Jew named Ernst Percy SCHABLIN and along with her mother-in-law Klara SCHABLIN she was deported from the Drancy concentration camp outside Paris to Auschwitz-Birkenau on November 4, 1942.

She was presumably murdered in the gas chambers there right after the »Selection« on arrival. Frieda’s father-in-law Paul SCHABLIN had already been sent to Auschwitz on August 28, 1942 and had been murdered. Before the internment in Drancy of Frieda and her in-laws, her husband Ernst Percy managed to flee to England, although he had to leave his family behind. He died there in 1980.

In the 1950s the sisters Stella and Gertrud LÖWIT sold their house in Salzburg as they both lived in New York by then. Their children kept up friendly contact with their former neighbors in Parsch after their mothers’ deaths. These neighbors learned from Trudi Löwit that her father, the actor Fritz RICHARD, had been shot to death by Nazis in Berlin when he mailed a letter to his family on February 9, 1933.

We, the family, of Fritz and Frieda Richard want to extend our deepest gratitude for all your hard work creating a memorial to honor the victims of the Nazi Regime. We are honored that you included our Great-grandfather Fritz and Great-aunt Fritzi. If our mother Marianne (Fritz and Frieda’s granddaughter) and Grandmother Stella (Fritz and Frieda’s daughter) were alive, we know they would be deeply touched at the recognition of their loved ones.

Thank you Dr. Kerschbaumer and the leaders and citizens of Salzburg.
We hope to visit Salzburg, one day, and see the memory stones.

The family of Fritz and Frieda Richard

1 According to information received from the organized Vienna Jewish Community (Israelitischen Kultusgemeinde Wien) Richard LÖWIT had seven younger siblings: Clara and Emil, who died in childhood; Berta, who died in Vienna on November 3, 1927; Alfred, who emigrated to the US in 1897; Otto, who was able to flee to England in 1938; Charlotte, (whose married name was Smucar) who died in Shanghai on December 11, 1942; and Gisela (whose married name was Singer), who was murdered in the Theresienstadt concentration camp on December 28, 1943. 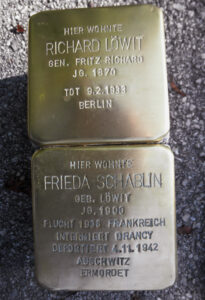 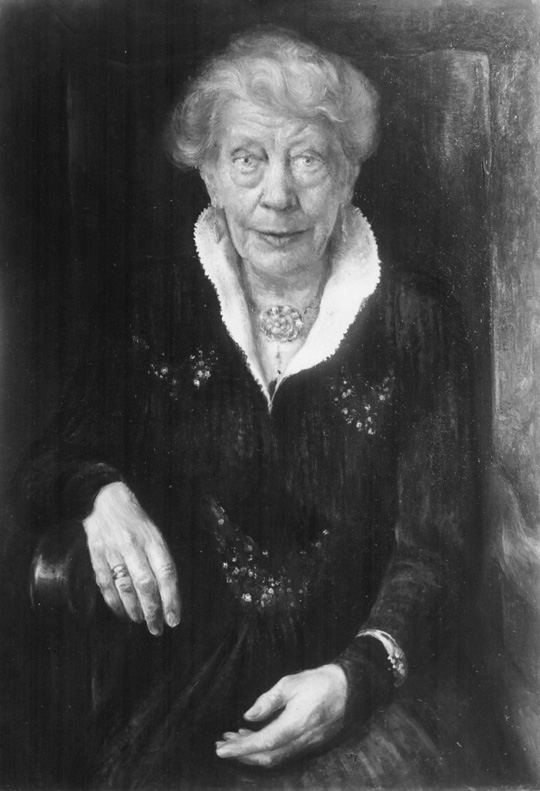 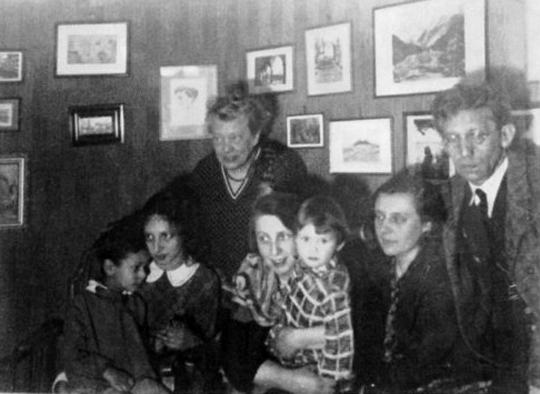 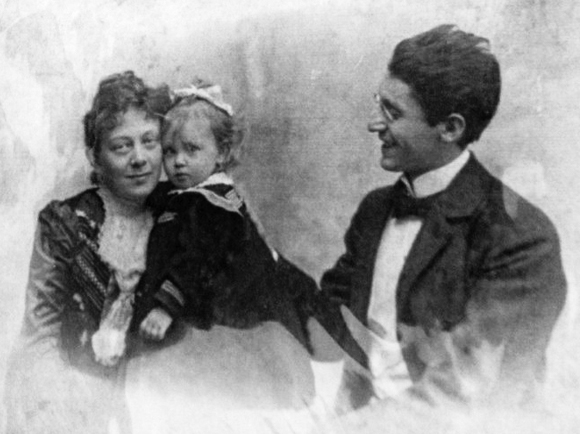 All stumbling stones at Sonnleitenweg 12