Johann HOLLEIS was born in Salzburg on July 12, 1939. He was a legitimate child from a Protestant family who was murdered on April 27, 1944 in the extermination center at the Vienna »Medical and Nursing Home Am Spiegelgrund« – one of 247 murdered children whose medical records were destroyed in 1945.

Johann’s mother worked in a tavern in the Kaigasse and was killed in the US bombing raid on Salzburg on October 16, 1944.

His father was a tailor’s assistant and died in 1963. 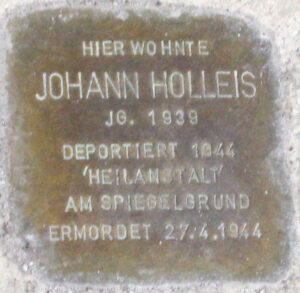 All stumbling stones at Bindergasse 6