On June 2, 1912 Karl KOFLER was born in Marosvécs [in Hungarian, it was known as Wetsch in German and Brancovenesti in Romanian]. Marosvécs was then in the Transylvania region of Hungary, but along with most of Transylvania it has been part of Romania since 1920. He was a child of the Jewish couple Josefa Perl Eltis (or Josefa Kofler) and Adolf Abraham Pistiner. Karl never married and he converted to Catholicism in the parish of Bischofshofen (upstream on the river Salzach, about 50 km south of the city of Salzburg) in December 1937.

During the 1930s Karl Kofler worked in construction in the Salzburg region. In May 1938 the labor office under the Nazi regime placed him with a construction firm that had a number of sites in the Salzburg area so he had no fixed address. It can be assumed that Kofler sympathized with the political resistance as he frequented an inn that served regime opponents as a conspiratorial meeting place and it was there that he was arrested under the Aliens Decree after the war began in September 1939.

The Gestapo arrest record for Karl Kofler notes that he was regarded as stateless and as a »full« Jew whose Jewish ancestry hadn’t been recorded in the »special census« of Jews in May 1939 because he had no fixed address. The Nuremberg Racial Laws made »racial defilement« an especially severe offense and Karl Kofler admitted (presumably under pressure or torture) to having had sexual relations with »Aryan« women. So he was charged with violating the Nuremburg laws and on March 12, 1940 he was sentenced to 18 months imprisonment by the Salzburg Special State Court for »violating § 2 of the Law for the Protection of German Blood and German Honor«.1

After serving his sentence in the Amberg prison in Bavaria, Karl Kofler was sent to Vienna on April 4, 1941. On September 29, 1941 he was deported from Vienna to the Flossenbürg concentration camp in Bavaria where he was registered as »Jewish, political protective custody« prisoner number 2834. On May 7, 1942, shortly before his 30th birthday, he died in the camp infirmary from »heart failure« (according to the death certificate by the concentration camp doctor).

Karl KOFLER’s sick mother Josefa allegedly died in a »sanatorium« (research has failed to locate any record of that so far). We do know that his father Adolf Pistiner, who worked as a laborer in the Styrian city of Leoben, was arrested in the pogrom night of November 9-10, 1938 and deported to the Dachau concentration camp. He was registered there as a »stateless Jew« and »protective custody prisoner number 22713«. Adolf Pistiner was murdered there on November 25, 1938.

1 On January 29, 1942 the Salzburg Special Court sentenced another Salzburg Catholic convert from Judaism to 18 months imprisonment for the same »crime«: Viktor POLLAK – who was transferred from the Amberg prison to the Maltheuern forced labor and prison camp where he was killed on November 14, 1942. 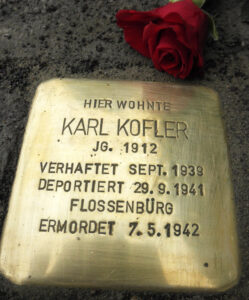 All stumbling stones at Vogelweiderstraße 96