Franziska »Franzi« van ALDERWERELT, née SCHINDLER, was born in Prossnitz Moravia (which was then part of Austria-Hungary and is now called Prostejov in the Czech Republic) on April 27, 1871. Her parents were the Jewish couple Netti Broch Schindler and Heinrich Schindler.

On June 11, 1895 Franziska married the Belgian writer Georges van ALDERWERELT in the Vienna municipal offices.1 Shortly after her conversion to Catholicism the couple married again in a religious ceremony in Vienna’s Lichtental parish church on April 25, 1901. That made Franziska van ALDERWERELT both a Catholic and a Belgian citizen – and she was identified that way in the Vienna and Salzburg police registers.

After the First World War the couple lived alternately in Gastein and the city of Salzburg, living mainly in good hotels. After the death of her husband Georges van ALDERWERELT in Salzburg on September 24, 1924 the widow maintained her life style. Every year she spent several weeks in one spa or another, and stayed in the renowned Hotel Pitter on the Rainerstraße (formerly the Westbahnstraße) when she was in Salzburg.2

Under the Nazi-Regime Franziska van ALDERWERELT lived first in Baden, just south of Vienna. After the start 1942 she was registered in a series of »collection houses« in Vienna’s Leopoldstadt, and finally for a few days in the old age home of the Carmelite Nuns at 15 Töllergasse in the 21st district – the deportation address of more than 70 Jewish converts to Catholicism.

The 71 year old Belgian citizen Franziska ALDERWERELT was deported as number 218 on Transport 35 from Vienna to the Theresienstadt concentration camp on August 13, 1942. She was murdered there on February 18, 1943 (the August 12, 1943 date of death listed in the Shoah Databank is incorrect).

1 Georges van Alderwerelt was born in Bruges on April 2, 1861 and died in Salzburg on September 24, 1924. He was the oldest of the six children of Marie Pauline Devaux and Isidore Joseph van Alderwerelt.

2 The often renovated Hotel Pitter with its concert café and beer cellar is now called the Pitter Crowne Plaza Hotel. 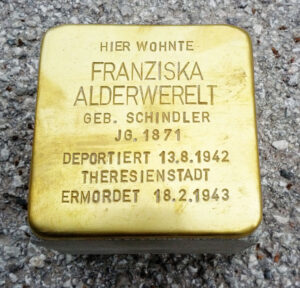 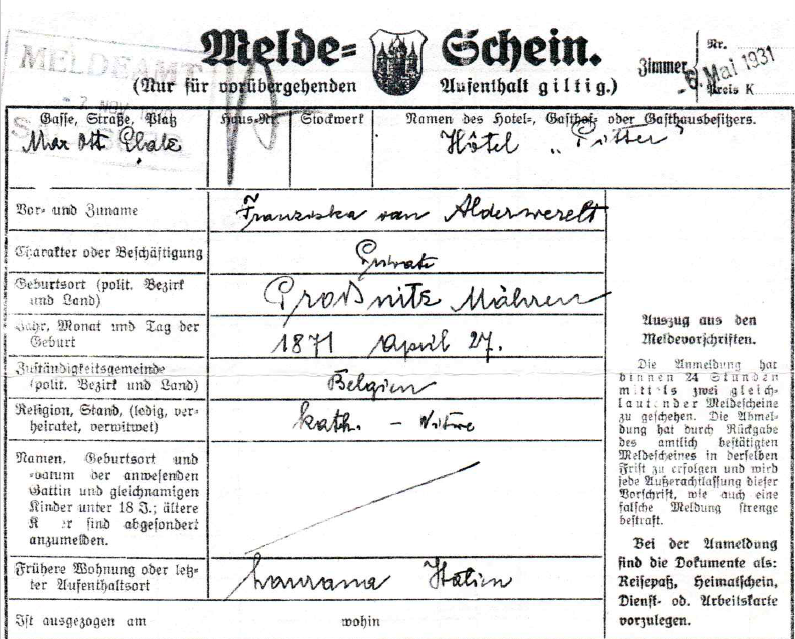 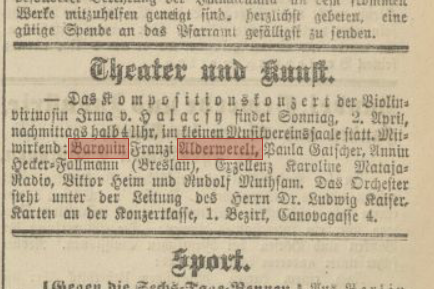 All stumbling stones at Max-Ott-Platz 4