On November 17, 1944 Karl BÖTTINGER, Matthias HOLZER and Andreas REHRL, three railroaders who had been imprisoned in the Salzburg State Court jail by the Nazis and who had then been forced to work cleaning up after the US bombings, were killed when a bomb they were trying to defuse exploded on the Max-Ott-Platz.

Two of the railroaders, Matthias HOLZER (who had been born in the district of Göriach, 140 km south of Salzburg on March 7, 1887) and Andreas REHRL (who had been born in Bischofshofen, 60 km south of Salzburg on December 1, 1899) didn’t live in Salzburg before their arrests and little biographical information is available. Both were married. Andreas REHRL had three young children and as a forced laborer he was uninsured so his survivors didn’t get any compensation when he was killed.

Karl BÖTTINGER was born in Andorf, in the Schärding district of Upper Austria, on October 27, 1891. He was a skilled carpenter and had been working for the railroad since 1918. He was a member of both the Social Democratic Labor Party and its associated Free Labor Union until they were banned in February 1934. Since 1935 he and his wife Rosa lived in house number 3 on the Mönchsberg. Under the Nazi regime Karl BÖTTINGER was a member of the Revolutionary Socialists (RSÖ) resistance group in the railway workshops led by Engelbert WEISS. All of the organized resistance groups were smashed in 1942. The RSÖ leaders Anton Graf, August GRUBER and Engelbert WEISS were sentenced to death by the so-called »People’s Court« and were executed. On January 19, 1944 the Vienna Supreme Court sitting in Salzburg held its last process against an RSÖ member for »conspiracy to commit treason« Over the course of two years Karl BÖTTINGER had paid five or six Reichsmarks as dues to the RSÖ, and he was sentenced to three years imprisonment for that. In 1954 a street in Salzburg’s Liefering neighborhood was named after this socialist railroader who was killed during the Nazi period.

It should also de noted that the Dachau concentration camp prisoners Josef Bieronsky, Martin Gay, and Lech Manczak, were killed while trying to defuse a bomb near the Hotel Münchnerhof in the Dreifaltigkeitsgasse on November 17, 1944. The concentration camp prisoner Michael CHARTSCHENKO survived the »suicide mission« operations in Salzburg, but he was murdered by SS men on the day Salzburg was liberated by American troops. 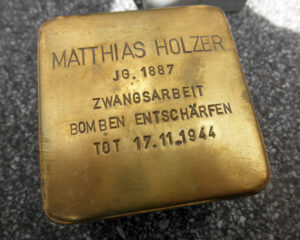 All stumbling stones at Max-Ott-Platz