Mathias HORVATH was born in Szombathely (Steinamanger) Hungary (in what was then Austria-Hungary) on January 13, 1888. He was a married Catholic with two children. The HORVATH family lived in Petržalka (previously known as Engerau), on the right bank of the Danube just downstream from Bratislava (formerly Pressburg) in what is now the Republic of Slovakia.

These were places that had been linked to Vienna by the Pressburg Railroad since 1914, and Mathias HORVATH worked as a boiler stoker in Bratislava. He had become a member of the Czechoslovakian Communist Party in 1929 and living near the rail line made it easy for him to serve as a courier between Vienna and Bratislava for the resistance to the Austrian dictatorship in the 1930s. But he was caught by the Austrian police and was sentenced by the Vienna State Court to twelve months imprisonment for smuggling prohibited Communist propaganda. After his release he was unemployed for some time.

After the Munich agreement of September 30, 1938 the HORVATH family’s home town of Petržalka (Engerau) was annexed to Nazi Germany. In the spring of 1939 Mathias HORVATH came to Salzburg in search of work. He got a job with a construction firm and starting in November 1940 he worked as a construction supervisor for the German Railways – which housed its foreign workers in a camp near the Salzburg main station. He didn’t last long in that position: his co-workers considered him to be a »red« and colleagues denounced him to the Gestapo – which arrested him on February 13, 1941 and charged him with spreading Communist verbal propaganda.

Although this was during the period of the Hitler-Stalin non-aggression Pact between August 1939 and the German invasion of the Soviet Union in June 1941, HORVATH was still charged with »conspiracy to commit treason«. Mathias HORVATH was thrown into the Salzburg State Court jail and didn’t come to trial until February 11, 1942 – by which time Germany and the Soviet Union were at war and the offense was even more serious. From February 10-13, 1942 a little known sitting of the 7th Senate of the Vienna Superior Court, presided over by Judge Ludwig Engel, took place in the courtroom of the Salzburg State Court. Fourteen opponents of the regime, including nine Communists from the Salzburg Tenneck industrial zone, were put on trial over in those four days and were sentenced to a total of 55 years for »conspiracy to commit treason«.

On February 11, 1942 Mathias HORVATH was sentenced to three years imprisonment and on January 22, 1944 he was deported by the Gestapo to the Mauthausen concentration camp where he was registered as »protective custody prisoner« number 42805. Seven days later, on January 29, 1944, the 56 year old prisoner was murdered there. Nothing is known about the fates of his wife and two children.

Their home town of Engerau (Petržalka) near Bratislava, which included a camp for Jewish forced laborers in the last months of the war, was returned to Czechoslovakia after it was liberated by Soviet troops in 1945. Since the velvet divorce of 1993 it has been part of the Republic of Slovakia.

A musical performance in the context of laying »Stumbling Blocks« near Salzburg’s main Railway Station on January 27, 2015. In rememberance of people murdered by the Nazis and against forgetting the innumerable atrocities of the Nazi regime. Composition and recording by Gerhard Laber.

© 2015 by Gerhard Laber. (Reproduction only allowed with the permission of the composer)
In solidrity with the victims, Gerhard Laber 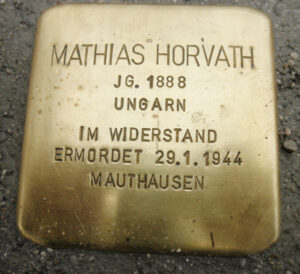 All stumbling stones at Südtirolerplatz