Karl WEITENTHALER was born in Graz Austria on January 14, 1896. He had lived in various places in the province and state of Salzburg since 1915, first in Mitterberghütten and then in Böckstein (4km from Badgastein in the Salzburg Alps), where he worked as a gold and silver miner before he suffered a mental breakdown after a mining accident. In 1918 he joined the Social Democratic Labor Party (SDAP) and he became a member of its associated militia, the Republican Defense League, in the middle of the 1920s. By the early 1930s he had moved over to the Austrian Communist Party (KPÖ) which was banned by the authoritarian government of Engelbert Dollfuss in May 1933.

We don’t know what role Karl WEITENTHALER may have played in the political conflicts that broke out in Böckstein during the Austro-fascist dictatorship, though we do know he had gotten married by then. But given the fact that he continued to be a Communist into the Nazi period suggests that he was probably involved. He made no secret of his opposition to the Nazis, whom he called »Nazi cripples«. He was brought to court twice for that. The first time was on December 21, 1939 when a »special tribunal« in the Salzburg State Court sentenced him to ten weeks imprisonment for »offenses in violation of the treachery act« (the law against malicious attacks on the State or the Nazi party) – a Bagatelle compared to the punishment meted out in the war year of 1942.

Since the early summer of 1941 Karl WEITENTHALER had lived in the city of Salzburg with his wife and young child. He was a foreman for a construction company working at a Military Clothing Office on the Siezenheimer Straße and Kleßheimer Allee in the Maxglan neighborhood. One of WEITENTHALER’s comrades and the leader of the illegal KPÖ local in Maxglan was a shoemaker in the Military Clothing Office named Josef Hofkirchner. The Military Clothing Office was where the local Communist activists met to organize their resistance activities. At the beginning of 1942 the Gestapo managed to roll up and smash the resistance network with the help of an undercover agent who had penetrated the network.

It can be assumed that Karl WEITENTHALER had good contact to the activists in the organized resistance, but even though he had already been arrested by the Gestapo at his workplace in Maxglan on September 1, 1941, some five months before the wave of arrests there is no indication in the police and court records of any association with an organized resistance group – which means that WEITENTHALER didn’t betray his comrades when he was interrogated by the Gestapo.

The prosecutor’s charge sheet of September 30, 1941 says that it was WEITENTHALER who was denounced, that is betrayed by a work colleague for making remarks critical of the regime. One of the nine” witnesses” said to be known by the police and the court said that when he told WEITENTHALER (whose nickname in the workshop was »the Communist«) that he should remember that »in the end [he] is also a German«, WEITENTHALER had replied »I’m not a German, I’m an Austrian«. The indictment against WEITENTHALER, based on the statements of the nine informers, stated: »in Salzburg he had in the months from June to August 1941 promoted via oral Communist propaganda a highly treasonous project, to forcefully rip off part of the Reich [Austria] and to change the Reich constitution by force«.

Karl WEITENTHALER, imprisoned in the Salzburg State Court jail, again stood before a judge in Salzburg. It is hardly known that from October 12-16, 1942 the 7th Senate of the Vienna Superior Regional Court sat in the courtroom of the Salzburg State Court and tried 24 activists of the banned KPÖ from the city and state of Salzburg, including WEITENTHALER. The 24 Communists were sentenced to a combined total of 177 years imprisonment. On October 15, 1942 the 7th Senate sentenced WEITENTHALER to ten years in prison and ten years »loss of honor« [i.e. loss of civil rights] for »undermining the military by Communist word of mouth combined with preparation for high treason«.

WEITENTHALER, who had been arrested about two months after the German invasion of the Soviet Union, was the only one of the 24 Communists who was mainly sentenced for violating the »Special Criminal Regulations in Time of War«. The court stated that »The commission of the offense in time of war, especially when the German people is involved in the heavy defensive struggle against Bolshevism as especially aggravating«.

It is likely, though not certain, that while incarcerated in a Bavarian prison the vocal regime and war opponent Karl WEITENTHALER refused to be recruited for service in the German army’s »probation unit« Penalty Division 999. In any case he was deported by the Munich Gestapo to the Mauthausen Concentration Camp on January 8, 1944. He was registered there as »protective custody prisoner« number 41942 and on November 25, 1944 he was assigned to the external camp squad Linz III. Karl WEITENTHALER died there on April 12, 1945, less than a month before the camp’s liberation by American forces, he was 49 years old. The official cause of death was »poor circulation«.

His wife and child who survived him in Lower Austria were eligible for victims’ compensation in liberated Austria. 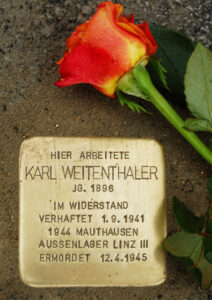 All stumbling stones at Kleßheimer Allee 45