Bruno WALTER was born at number 1 Hafenstraße, in the Neukölln district of Berlin, on September 15, 1876. He was the second of the three children of a Jewish couple, a merchant named Josef Schlesinger and his wife Johanna, neé Fernbach.

Bruno Schlesinger – as pianist and band leader, he called himself Bruno WALTER – reputedly converted to Catholicism in 1898: but his claimed conversion isn’t actually certain.

When Bruno Schlesinger and Elisabeth Wirthschaft (who adopted the stage name Elsa Korneck) married in the capital of the German Reich on May 2, 1901, Berlin registry office No. 3 recorded »evangelical« as the religion for both spouses.

It was unknown until now that Elsa and Bruno Schlesinger had their Vienna-born daughters Charlotte (b. 1903) and Margarethe (b. 1906) baptized in the main Lutheran Church in the center of Vienna.

On the other hand it has long been known that in September 1901 the director of the Vienna Court Opera, Gustav Mahler, hired Bruno WALTER to conduct at the Court Opera. In May 1911 he took the name WALTER as his legal name. He also received Austrian citizenship then.

In retrospect, we know that the changes of religion and name could sometimes remove career barriers, but they had no real effect on Antisemitism and racism.

Before Bruno WALTER left the imperial capital and residence city of Vienna, he premiered Das Lied von der Erde [The Song of the Earth] and the 9th Symphony of Gustav Mahler, who died in May 1911.

From then on, Bruno WALTER was regarded as the leading interpreter of Gustav Mahler’s work and also as a conductor of the first rank in European music centers. But his 20-year presence in German musical life, in Munich, Berlin and Leipzig, came to an abrupt end in 1933.

The Viennese music critic Max Graf paid tribute to Bruno WALTER on the occasion of his 60th birthday on September 15, 1936:

… Walter had become one of the most celebrated international conductors and, crowned with this laurel, came to Salzburg, where he reached the highest artistic level of his life. The performances of the Salzburg Festival that he conducted were first class events.
Der Wiener Tag, September 15, 1936, p. 6

In the annals of the Salzburg Festival from 1925 to 1937, the artistic achievement of pianist and conductor Bruno WALTER is soberly recorded: 28 orchestral concerts, 13 operas and six lieder evenings (as piano accompaniment for the singer Lotte LEHMANN).

It is not surprising that nobody other than Bruno WALTER conducted works by Gustav Mahler (whose works were banned by Germany’s Nazi regime) at the Salzburg Festivals: the 3rd and 4th Symphonies (1926, 1933, 1936), Das Lied von der Erde (1928, 1931, 1934) and Kindertotenlieder, a song cycle that had premiered in Vienna in 1905 and which was only performed once – by the singer Luise Willer and the Vienna Philharmonic under Bruno WALTER at the Mozarteum on August 17, 1930:

This work, so much of which points to the much later and richer in its means of expression Lied von der Erde with which it shares the depth of sensation and mastery in the solo handling of the instruments and their contrast with the singing voice, could not have found a more worthy conductor than when entrusted to Mahler’s student and champion, Bruno Walter.
Neue Freie Presse, August 22, 1930, p. 3

After 1933, the 50th anniversary of the composer Richard Wagner’s death, Bayreuth served as a National Socialist place of worship – »Hitler’s Court Theater« (according to Thomas Mann). Maestro Arturo TOSCANINI turned his back on Bayreuth in 1933 – not specifically in protest against Bayreuth, but rather against the boycott, discrimination and persecution of the Jews in Germany.

In that same 50th anniversary of Wagner’s death, one of his stage works was presented for the first time in the Salzburg Festival Hall: Tristan und Isolde, a love drama that Bruno WALTER, who had been expelled from Leipzig and Berlin in March 1933, rehearsed with the Vienna Philharmonic in Salzburg. The Viennese architect Oscar Strnad designed the set. It premiered on August 4, 1933.

The Vienna music critic Paul Stefan (Grünfeld) saw the ovation of the audience as a protest against the racial madness that had seized Bayreuth under director Winifred Wagner, a close friend of Adolf Hitler:

… The house, which was filled to the last seat, gave ovations to all these artists, but especially Walter. In his case, it openly demonstrated against the new Borussian1 application of racial madness to music, a madness that Walter refuted yesterday by deed and example.
But a key figure for the Third Reich had unmistakably refuted it from the beginning: Richard Wagner, who (it cannot be said often enough) put his first ‘Parsifal’ – and ‘Parsifal’ no less – into the care of the Rabbi’s son Hermann Levi. The gentlemen, who are now patrons of the Bayreuth Festival, might have simply excluded even him for sabotaging the national revolution.
Paul Stefan, Die Stunde, August 6, 1933, p. 5

Although Richard Wagner’s tirades against Judaism were well known, the Vienna music critic Paul Stefan understood that when the opera Tristan und Isolde was conducted by Bruno WALTER in Salzburg it was an artistic protest against the supposedly unjustified claim to Richard Wagner as one of their own by Nazi Germany.

Thus, the idol celebrated on the 50th anniversary of his death was projected as flawless and the festival city of Salzburg was able to position itself credibly as the »Counter-Bayreuth«

It is true that Hermann Levi conducted the world premiere of Parsifal in Bayreuth in 1882, but Paul Stefan ignored the fact that Wagner initially objected to his doing so and was quoted as saying that Levi should be baptized before conducting it. What was far more important for the Salzburg Festival was that Hermann Levi translated Lorenzo Da Ponte’s libretti for the operas Così fan tutte, Don Giovanni and The Marriage of Figaro into German and that was how they were brought into the Salzburg opera repertoire as the »Mozart Cycle«.

These three Mozart operas were performed in German in the Summer Festival of 1922 along with Mozart’s Singspiel in three acts The Abduction from the Seraglio under the direction of Richard Strauss and Franz Schalk. From then on Mozart – composer and freemason, crosser of borders, universal and cosmopolitan – has been the fixed musical star of the Salzburg Festival.

The critic was especially enthusiastic about the »Salzburg« Magic Flute, which premiered in a new production on August 8, 1931 at the Festival House:

It is striking that there is so much childishness in the Magic Flute. This seemingly harmless & simple music only became so glorious because Mozart wrote it. And when it comes to the themes of fraternity and deep philanthropy, it was Mozart who gave his own expression to the ideals of Freemasonry […]. Otto Kunz.
Salzburger Volksblatt August 8, 1931, p. 6

The artistic sensation of the 1934 Summer Festival was Mozarts Don Giovanni. Bruno WALTER staged it in Italian with the great Italian bass Ezio Pinza in the title role and he engaged the ballet director of the Vienna State Opera Margarete WALLMANN for the choreography.

It is certain that Bruno WALTER was one of Mozart’s most important interpreters and he especially liked to conduct his symphonies in Salzburg:

For Bruno Walter, Mozart is a universal composer with all open and deep qualities, a musical god who, whether in a good or bad mood, can do everything in a thousand ways. […]
With the orchestra of the Philharmonic, this music-making was perfect for a festival. It showed in the results: a sold-out house, a babel of tongues, and an enchanted audience. Otto Kunz.
Salzburger Volksblatt, August 28, 1933, p. 4

The critic forgot to mention that Bruno WALTER’s Mozart concert, which took place in the Mozarteum on August 27, 1933, was part of a special series of concerts that the Salzburg Festival and the International Mozarteum Foundation organized together under the title »Mozart Festival«, building on the legendary Mozart festivals of the decades before the First World War.

On August 16, 1928 Bruno WALTER gave his first »Mozart Festival« philharmonic concert in the Great Hall of the Mozarteum, and on August 8, 1937 he conducted his sixth or seventh – in any case it was his last in the Mozarteum’s Great Hall:

… It was a real Mozart Festival, cheered and received enthusiastically; the radio carried it out into the world as best it could. Otto Kunz.
Salzburger Volksblatt, August 9, 1937, p. 4

Bruno WALTER conducted Mozart’s Opera buffa The Marriage of Figaro for the first time in the summer of 1937 – in a new Italian production by Lothar WALLERSTEIN choreographed by Margarete WALLMANN. As in his production of Don Giovanni, WALTER starred the Italian bass Ezio Pinza in the title role. Austrian Chancellor Kurt Schuschnigg was prominent in the audience at the premier.

In early 1938, Bruno WALTER’s contract as »artistic advisor« to the Vienna State Opera was extended. Another Bruno WALTER Mozart opera in Italian was planned for the Salzburg Festival in 1938: Così fan tutte.

Thus he would have directed four operas in the summer of 1938: Gluck’s Orpheus and Eurydice, Mozart’s Don Giovanni, The Marriage of Figaro and Così fan tutte (with Librettos from Da Ponte) – all in addition to The Magic Flute conducted by TOSCANINI, making it four Mozart operas in total.

A glance at the annals of the 1938 Festival under the control of Germany’s Reich Minister of Propaganda Joseph Goebbels shows that only two Mozart operas were performed: Don Giovanni and The Marriage of Figaro, conducted by Karl Böhm and Hans Knappertsbusch respectively – Mozart’s star was dwindling.

The name of the conductor, who had introduced Italian productions of Mozart and Da Ponte in Salzburg, Bruno WALTER, was erased from the program for racist reasons.

It is also noteworthy that Ezio Pinza didn’t join Toscanini’s boycott of the Nazi controlled Festival in 1938 and appeared again in the title roles in Don Giovanni and Figaro. While the annals proudly reported Pinza’s appearance, they did not report that the Italian opera star had engaged in a love affair with Bruno WALTER’s married daughter Gretel [Margarethe] – an affair that culminated in tragedy: on August 18, 1939 Margarethe was shot to death by her husband Robert Neppach in their Zurich exile – after which he committed suicide.

Bruno WALTER, his wife Elsa and their older daughter Lotte [Charlotte] left Europe after the start of the Second World War and reached New York on November 9, 1939.

The WALTERs lived in the Beverly Hills district of Los Angeles. Elisabeth suffered from severe depression after the murder of her daughter and died there in 1945. In 1946, Bruno WALTER acquired US citizenship.

It is also important to note that Bruno WALTER returned to Salzburg and conducted seven concerts with the Vienna Philharmonic in the Salzburg Summer Festivals of 1949, 1950, 1953 and 1956 – concluding with Mozart’s Requiem, Mozart’s last composition that was left unfinished when he died.

Many of the places where he had been a leading cultural figure named streets after him – including Berlin, Munich and Salzburg. An asteroid also bears his name.

1 The Borussia myth: Borussia is the Latin name for Prussia – this historical formulation held that Prussia was Germany’s savior, that it was the destiny of all Germans to be united and it was Prussia’s destiny to accomplish this. Created by late 19th century German Nationalist historians it was taken on and racialized by the Nazis. 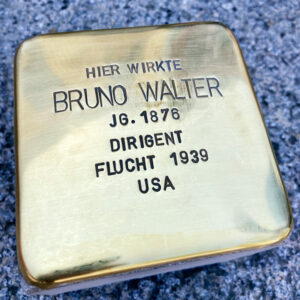 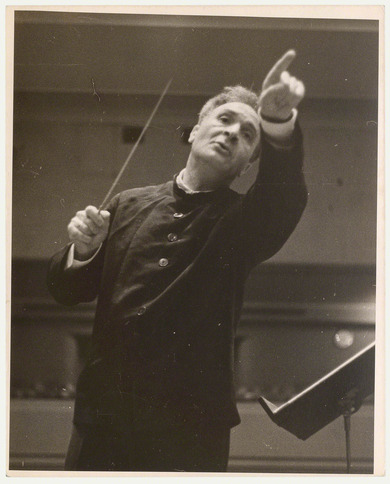 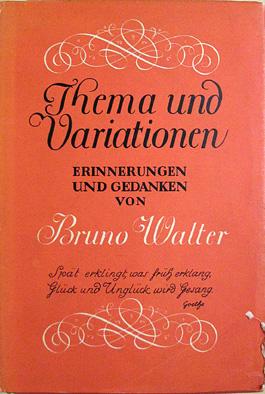 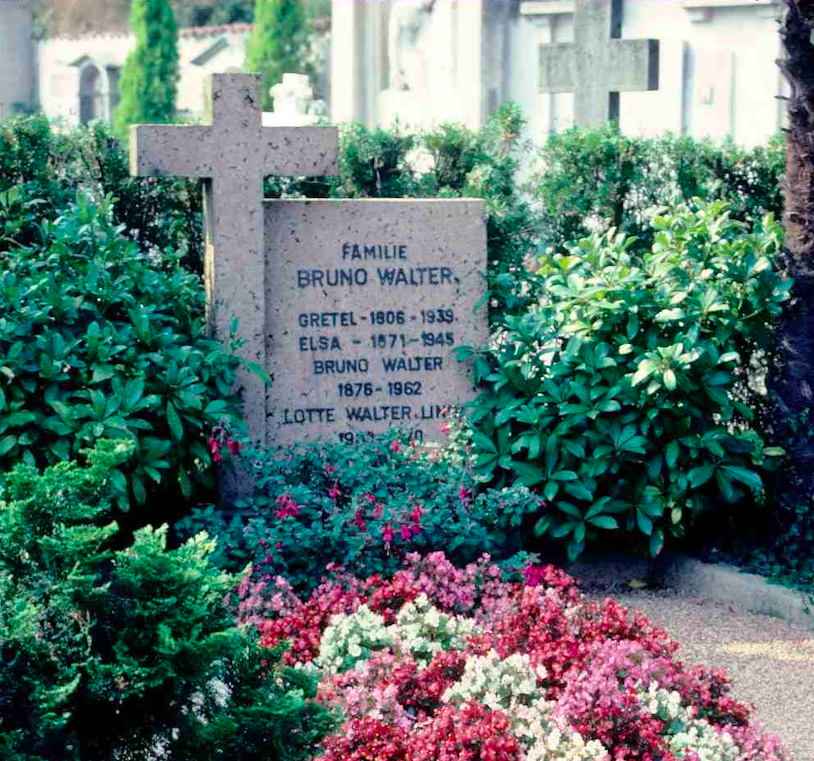