Ludwig Franz SCHÖNWALD was born in Vienna on July 30, 1890. He was the younger of the two sons of Debora Schönwald, née Marek, and Leopold Schönwald. Leopold was Jewish and Debora converted to Judaism before their marriage. Ludwig’s older brother Friedrich became ill during his law studies at university; he died in 1909 at age 20 and was buried in the Jewish section of the Vienna Central Cemetery.

Ludwig Franz SCHÖNWALD studied philosophy at the University of Vienna and wrote a dissertation on »Interest in Kantian philosophy and the influence of his ideas in Austria in the Josephian and Franciscan eras«. He received a doctorate in philosophy on July 6, 1914. From then on he was active in journalism and literary affairs at home and abroad.

At the beginning of 1928 he got married in London to Isolde Pringsheim, a young Jewish woman who had been born in German Silesia on July 12, 1905. Their sons Rudolf and Peter were born in Hamburg in 1928 and 1929 respectively. The Schönwald family left Germany when the Nazis took power there and from September 1934 on they lived at 6 Nesselthalergasse in the Parsch neighborhood of Salzburg. Isolde Schönwald was listed as the owner in the property register. Their older son Rudolf had an elementary school friend in Salzburg named Gerhard Amanshauser who grew up in a German nationalist family and who became an author. In his 2001 autobiography, Als Barbar im Prater [Barbarian in the Prater] he recalled that in his school time:

My seat neighbor in the Nonntal Primary School was Rudi Schönwald. We got along extraordinarily well and because it was at school I wasn’t aware that Schönwald had a Jewish mother. It would have been impossible to meet him at a Catholic gym. It was also unthinkable that he would be invited into our garden. In summer and when the seasons changed the primary school pupils went barefoot. Only Schönwald and I were too elegant for that: we wore shoes

Before 1938 the Jewish origins of the Schönwald family were officially unknown in Salzburg, there is no religious affiliation noted on the city’s resident registration cards for them. Furthermore, the Schönwalds weren’t subjected to any Antisemitic hostility under the Austrian dictatorship – Dr. Ludwig F. SCHÖNWALD’s essays and theater reviews were even published in the Salzburger Chronik, an anti-Jewish Catholic newspaper. In addition, Dr. SCHÖNWALD‘s cultural history Spiel und Maske in Salzburg, vom Barock bis zu den Salzburger Festspielen [Plays and Masques in Salzburg: from the Baroque to the Salzburg Festival] was scheduled to be published by the Catholic Anton Pustet Press (though it never appeared due to the annexation of Austria by Nazi Germany in March 1938).

In June 1938 Schönwald family left Salzburg. We have learned from his son Rudolf Schönwald that his father fell into a deep depression and committed suicide in Hamburg in January 1939. Dr. Ludwig Franz SCHÖNWALD was 48 years old when he was driven to his death by the Nazi regime. His father died in Vienna at age 85 in February 1940 and was buried in the Jewish section of the Vienna Central Cemetery. His mother continued to live in Vienna, as for a while did his wife Isolde and their teenage sons Rudolf and Peter. On July 26, 1942 Isolde Schönwald‘s 67 year old mother Elisabeth, widow of the economist Dr. Otto Pringsheim, was deported from Breslau to the Theresienstadt concentration camp – where she was killed on September 14, 1942.

In 1943 the widow Isolde Schönwald and her two sons managed to flee to Hungary, which at that point was still not occupied by the Nazis. Right after the occupation of Hungary by German forces in March 1944 Isolde Schönwald was arrested and deported to Auschwitz in the first transport of Hungarian Jews. After half a year in the Bergen-Belsen concentration camp she was transferred further to the Neuengamme camp’s external branch at Salzwedel. Around 3,000 women were freed by the US Army from the Salzwedel forced labor camp on April 14, 1945 – including the 39 year old Isolde Schönwald. She was able to reunite in liberated Austria with her sons Rudolf and Peter, now 16 and 15 years old respectively – they had survived the terror in Hungarian camps and in hiding.

Isolde SCHÖNWALD’s house in Salzburg hadn’t been confiscated. In 1938 an army paymaster was quartered there and then, in 1941 the composer Cesar Bresgen and his family moved in. In 1955 Frau Schönwald, who was living in Vienna, sold her Salzburg house. The former schoolfriends Rudolf Schönwald and Gerhard Amanshauser stayed in contact with each other: »… Schönwald could write excellent essays, and I was good in drawing. But later I wrote the essays and he fortunately survived the persecution and became a painter«. (Als Barbar im Prater, 1978)

On February 15, 1980 an article about the artist Rudolf Schönwald written by Paul Floras appeared in the weekly DIE ZEIT:

… GOKS is a Vienna dialect term for nonsense, and GOKS as a person is the hero of a comics series that Rudolf Schönwald developed for Günther Nenning‘s New Forum in Vienna. He is an Austrian who lives in exile as a drawing professor at the technical high school in Aachen, although he is a prize winning and overall too little known master of free graphics and free speech.

Rudolf SCHÖNWALD´s mother died in Vienna in March 199, his brother Peter in 2011. 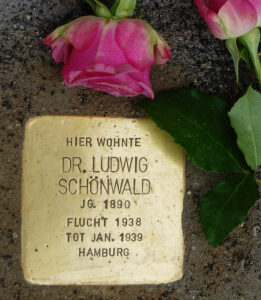 All stumbling stones at Nesselthalergasse 6