Helene TAUSSIG was born in Vienna, capitol of the Austro-Hungarian Monarchy on May 10, 1879. She was the fifth of twelve children of the Jewish couple Sidonie von Taussig, née Schiff, and Theodor Ritter von Taussig. Her father was one of the country’ most successful and respected bankers and had been knighted when he was in his thirties. As a young banking expert after the stock market crash in 1873 he had renovated the insolvent Bodenkreditanstalt, the bank that administered the private fortune of the imperial house, and expanded it to become the leading financial institution of the monarchy.

Later he became the head of the Bodenkreditanstalt and president of several large firms, including the state railway company, the arms factory in Steyr, & etc. Theodor von Taussig was also a member of the board of trustees of Vienna’s Jewish Community Organization. It was said that he was one of the most prominent of those among the assimilated and educated Jewish upper and middle classes in the Habsburg Monarchy who had not converted to Christianity but who had made a successful career nonetheless.

When Theodor von Taussig died on November 24, 1909 his bier was on display in the palace of the Bodenkreditanstalt before he was interred in the Jewish section of the Vienna Central Cemetery. In 1936 his widow was buried beside him with little ceremony. Six days after she died a death notice was placed in the Neuen Freien Presse in the names of the three sons and nine daughters of the Taussig family – that had been one of the most prominent families in the Monarchy.

After the collapse of Austria-Hungary and the creation of the Austrian Republic the family became entirely forgotten, which is why hardly anyone knows that three of the twelve siblings are among the victims of the Holocaust: Alice von Wassermann and Clara von Hatvany-Deutsch, the oldest and second oldest of the twelve siblings, and the artist Helene von TAUSSIG – whose life and work was buried in silence for fifty years before it was recalled as a result of the efforts of Salzburg artist Wilhelm Kaufmann.1

The artistic creations of Helene von TAUSSIG, who converted from Judaism to Catholicism in 1923, are now recognized thanks to the in depth monograph of the art historian Nicholas Schaffer, curator of the Salzburg Museum2. Wilhelm Kaufmann gave nineteen pictures by Helene von TAUSSIG that he had rescued to the Carolino Augusteum Salzburg Museum in 1988 and the museum put them on display in 2002 – without any indication of ownership.

They were only restored to her family in 2012, long after Austria promised to restore artworks stolen by the Nazis to the rightful heirs of their original owners. Because one of the heirs chose to sell some pictures only eleven of the »rescued pictures« of Helene von TAUSSIG remain in the possession of the Salzburg Museum.

Helene von TAUSSIG lived and worked, with interruptions, for about 20 years in the village of Anif, just south of Salzburg – after August 1934 in a studio house designed be the architect Otto Prossinger. At first, as a convert she remained unmolested by the Nazis but on February 28, 1940 she was deported by the Gestapo to Vienna. She returned to Salzburg on April 29, 1940, but she was again arrested by the Gestapo and deported to Vienna – where she found refuge in the (old age home) of the Carmelite nuns at 15 Töllergasse in the 21st District.

That was a collection point for Catholics of Jewish origin and was the deportation address for more than 70 Catholics who had converted from Judaism – including Franziska van ALDERWERELT and Rudolf Erich MÜLLER who had also been deported from Salzburg. On April 9, 1942 Helene von TAUSSIG was deported to the Izbica Ghetto which was in the portion of occupied Poland that the Germans designated as the »Generalgouvernement«. She was murdered some time later, either in the ghetto or in one of the death camps at Belzec, Sobibor or Majdanek. According to the official death record the 62 year old Helene »Sara« TAUSSIG died of »heart failure« in Izbica on April 21, 1942 [at the hands of the Nazis »heart failure« often resulted from a bullet or torture].

Helene von TAUSSIG’s sister Alice von Wassermann-Verheyden and her son Dr. Robert von Wassermann were deported from Belgium to Auschwitz where they were murdered. Another sister, Clara von Hatvany-Deutsch, was imprisoned in the Nazis’ Kistarcsa transit camp in Hungary when she was killed. The circumstances under which her brother Dr. Karl von Taussig died in Budapest on May 25, 1944 remain unclear. So far the date and place of death of her sister Hedwig May-Weisweiller are still unknown. We do know that siblings Emmy Redlich, Flora Paul-Schiff, Gertrude Schüller, Herma Artaria, Adele Mayer, Georg and Felix von Taussig were able to survive the terror.

The studio house of Helene von TAUSSIG in Anif was »Aryanized« and turned over to an engineer, regional civil servant and councilor named Josef Wojtek in October 1941. He gave it as a present to his daughter Leopoldine in 1943. Leopoldine »Poldi« Wojtek was very active as an artist under the Nazi regime and was the ex-wife of art historian and art thief Kajetan Mühlmann. Given the fact that the beneficiaries of the Nazis remained well placed in liberated Salzburg it isn’t surprising that the restitution of the studio house »Aryanized« in 1941 was postponed for many years.

The property registers of Anif indicate that on November 23, 1953 a court order led to the ownership of the property being registered in the names of Helene von TAUSSIG’s heirs, her nieces Silvia and Marietta – but by then the unconventional studio house had been sold and demolished.

Thanks to the initiative of Anif citizen Rupert Horner and the mayor Dr. Hans Krüger a Stumbling Block can be laid in the village center to memorialize the »good spirit of Anif« the acclaimed Helene von TAUSSIG. 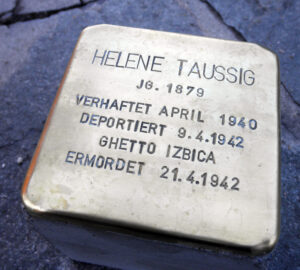 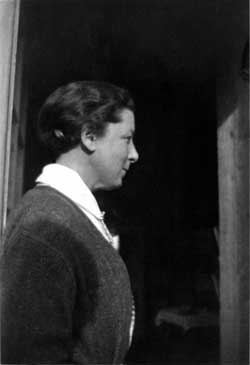 All stumbling stones at Kirchenplatz