Otto SCHNEIDER was born in the Upper Austrian town of Wels on December 12, 1882. He was an unmarried ballet master registered as a Roman Catholic.

He lived in Salzburg under the Nazi regime and his last residence was at 23 Lasserstraße, a property that had belonged to a Jewish woman who was expelled from Salzburg in 1938.1

In October 1939 Otto SCHNEIDER was arrested, presumably on the basis of a denunciation, and was prosecuted because of his sexual orientation according to the records of the Salzburg Provincial Court. The records of the verdict and sentence are gone2 but we know that he was deported to the Dachau concentration camp on January 20, 1941.

He was murdered there on November 30, 1941 – the official cause of death was reported as »inflammation of the left lung.« His death is noted in the police register of the city of Salzburg.

2 Under the Nazi regime the Salzburg Provincial Court condemned 338 people, including six women, for violating § 129 I b of the Austrian Penal Code – »unnatural sexual activity with a person of the same sex« – which was still enforced. The case files have since been destroyed. 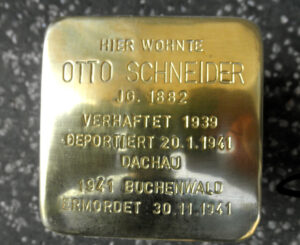 All stumbling stones at Lasserstraße 23