Adolf STILLER was born in Vienna in 1888. He was a Catholic cabinet maker who had lived in Maxglan since 1913 and had married the Maxglan native Anna WÖRNDL. An emotionally volatile husband and father of ten children, he entered the Salzburg Provincial Sanitarium on April 23, 1938.

On April 17, 1941 he was sent from there to the extermination center at Hartheim Castle near Linz in Upper Austria where he was murdered. The handwritten note »Pol. Liste«1 on his police registration file leads to the conclusion that Adolf STILLER was treated as an opponent of the Nazi regime.

1 The »Pol. Liste« (Polizei Liste) was a Gestapo index of regime opponents. 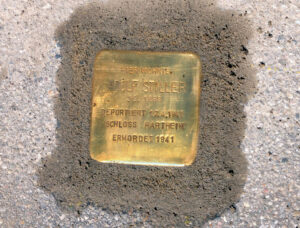 All stumbling stones at Stieglstraße 3