Anna FASSA, née Krejci, was born January 15, 1878 in the Liefering district of the city of Salzburg. A Catholic, she was married to the commercial painter Anton FASSA (who died in February 1919) and had two children.

The Fassa family had lived at 8 Steinbruchstrasse in Salzburg (which they owned) since 1901. In 1936 Mrs. Fassa was declared legally incompetent and in 1937 she was admitted to the provincial mental hospital Salzburg-Lehen. On April 18, 1941 she was deported to Hartheim and murdered there. 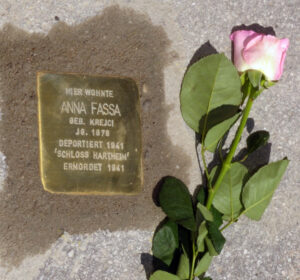 All stumbling stones at Steinbruchstraße 8