Michael Kritzinger was born in Waldzell (in the Ried district of the Inn Quarter of Upper Austria) on June 2, 1893. He was an unmarried Roman Catholic who worked for the city administration in Salzburg. He had moved from the Inn Quarter to Salzburg with his parents around 1900 and had local citizenship rights in Salzburg. From 1916 on he lived in the Schallmoos neighborhood at 5 Bayerhamerstraße. Starting in the 1920s he was a member of the Social-Democratic Labor Party and its associated Free Trade Union and Republican Defense League. After those organizations were banned in February 1934 he was a member of the illegal Austrian Revolutionary Socialist organization (RSÖ).

After the Nazis took over Austria he joined the Communist resistance movement organized by Franz OFNER and Anton REINDL. At the beginning of 1940 Kritzinger was recruited by Heinrich GITTLER into the illegal Communist Party (KPÖ) where he was a member of the Gnigl local and, after May 1941 a cell leader. At the beginning of 1942 the Gestapo succeeded in getting a spy into the ranks of the illegal Communist and Revolutionary Socialist organizations and that enabled them to roll up and smash the two organizations. At least 79 activists from the Salzburg city and regional organizations were killed in the Nazis’ prisons and concentration camps, including 29 railroaders.

Before Heinrich GITTLER was arrested as the leader of the Communist local organization in Gnigl he gave cell leader Michael Kritzinger a typewriter to hide. Kritzinger, who had been deemed politically unreliable by the Nazi personnel office and declared not promotable in the city administration, was arrested by the Gestapo on February 9, 1942. At first he was held in the police jail and then in the jail of the Salzburg State Court – before he was transferred to the Landshut prison in Bavaria. In February 1943 he was sent to the Berlin-Plötzensee prison which served as the headquarters of the Nazis’ notorious »Peoples’ Court«.

A »Peoples’ Court« indictment from November 26, 1942 charged that five functionaries of the Gnigl Communist local (Alois Innerberger, Michael Kritzinger, Richard Schubert, Johann Schweitzer and Josef Sollereder) had been members of the Social Democrats until February 1934 and, with one exception, had also been members of the illegal Republican Defense League – all criminal offenses. Even worse, they had participated in Communist activities »after war broke out with Russia«.

On February 19, 1943 the Berlin »Peoples’ Court« ruled against the five Gnigl Communist functionaries. Johann Schweitzer, Richard Schubert and Josef Sollereder were sentenced to eight years imprisonment for conspiracy to commit treason while Michael Kritzinger and Alois Innerberger were sentenced to death on the same charge. Johann Schweitzer died in the Lüttringhausen prison on March 11, 1944. Richard Schubert, Josef Sollereder and the cell leader Alois Innerberger, whose sentence was reduced to imprisonment, all survived the terror. Nobody seems to have pressed for a pardon for the 50 year old Michael Kritzinger and he was decapitated in the Berlin-Plötzensee prison on September 13.

As far as we know he had no survivors entitled to victims’ compensation in liberated Austria. The personnel committee of Salzburg City employees has sponsored the Stumbling Block for Michael Kritzinger. 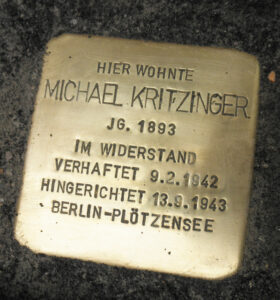 All stumbling stones at Bayerhamerstraße 5