On November 18, 1944 three prisoners from the Dachau concentration camp who had been assigned to the »Salzburg Police sub-camp« were killed while attempting to defuse a bomb near the Hotel Münchnerhof in the Dreifaltigkeitsgasse. Their mangled bodies were recovered on November 20th and were buried in an anonymous grave in the city cemetery. The concentration camp prisoners, who were presumably quartered in the police jail on the Rudolfsplatz, were not included in the city’s police registration files but their deaths were meticulously recorded back at the concentration camp headquarters in Dachau.

Thanks to a report from the Dachau Memorial Site Archives we are able to identify the victims. All three were registered as »protective custody prisoners« and wore the red triangle that marked political prisoners. On the triangles of two of them there was the addition of the letter P, standing for Polish.

Josef BIERONSKI was an ethnic Pole born in Niwka (now in Poland, but German Pomerania until after WWII) on December 20, 1924. He was an unmarried Catholic gardener and lived in Łosino (Lossin) before he was sent to the Groß-Rosen concentration camp. He was deported from there to the Dachau camp where he was admitted as »protective custody prisoner« Nr. 33929 on August 9, 1942.

Lech MANCZAK was an ethnic Pole born in Konarzyny, Pomerania (now Poland) on June 7, 1922. He was an unmarried Catholic metal worker and lived in Posen (now Poznań) before he was deported to the Dachau concentration camp where he was admitted as »protective custody prisoner« Nr. 5019 on April 25, 1940.

Martin GAY was born in Böhlitz-Ehrenberg (in the Leipzig district of Germany) on August 1, 1912. He was a married Protestant laborer in a print shop in Leipzig-Stötteritz (and was supposedly the father of three young children) before he was sent to the Sachsenhausen concentration camp. He was deported from Sachsenhausen to Dachau where he was registered as »protective custody prisoner« Nr. 1883 on March 5, 1940.

Josef BIERONSKI was only 19 years old, Lech MANCZAK was 22, and Martin GAY was 32, when they were killed while defusing a bomb in the Dreifaltigkeitsgasse on November 18, 1944. In the meantime we have also learned that Karl BÖTTINGER, Matthias HOLZER and Andreas REHRL, sentenced to forced labor by the Salzburg State Court, were killed while excavating a bomb from the Max-Ott-Platz. The Dachau concentration camp prisoner Michael CHARTSCHENKO survived working on this »suicide mission«, but was murdered by SS men on the day Salzburg was liberated by US troops. His name is on one of the first Stumbling Blocks that the artist Gunter Demnig laid in the city of Salzburg — on August 22, 2007. 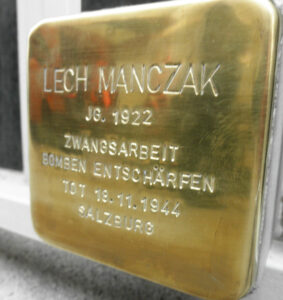 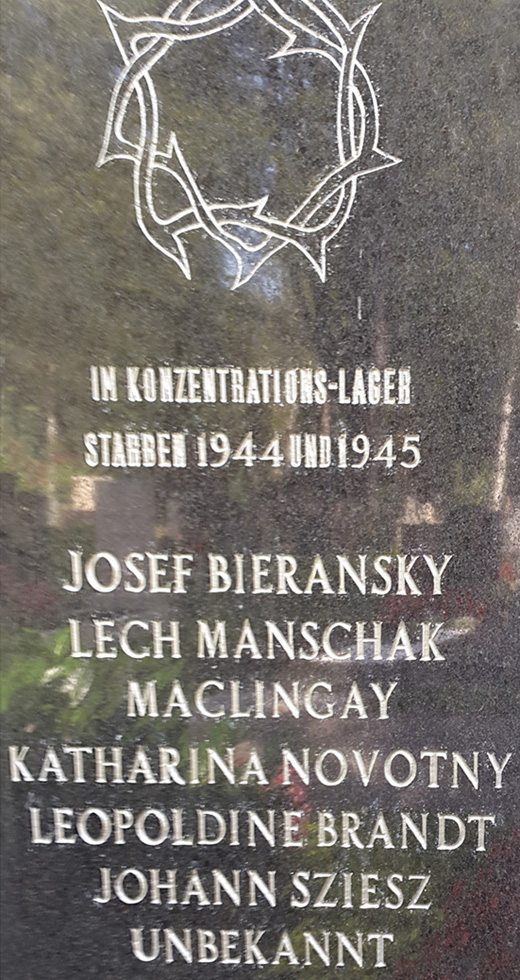 All stumbling stones at Dreifaltigkeitsgasse 3