Berta (Biene) EISENBERG, neé NUSSENBLATT, was born in Stryj (a town in what was then the Austrian Crown Land of Galicia and is now in the western Ukraine) on December 5, 1884. She was the daughter of Feiwel Leib Nussenblatt and his wife Scheindel Nussenblatt, neé Jäger. At the beginning of the 20th century her parents moved from Galicia to the Vienna with their children — Adolf, Berta, Sally (Sara Chana), Lina (Lea) and Heinrich (Hersch). After the dissolution of the Austro-Hungarian Monarchy in 1918 the Nussenblatt’s opted to stay in what remained of Austria rather than return to Stryi which became part of Poland. Feiwel Leib Nussenblatt died there in 1931 and his widow did so in 1934, both were buried in the Jewish section of the Vienna Central Cemetery (Gate IV, Grave 16b/3/7, 24).

Berta’s older brother Adolf Nussenblatt was the founder and operator of the Enka underwear company that existed at 35 Seidengasse in Vienna’s 7th District until the violence of 1938. Berta’s younger brother Heinrich was active in the same line of business as his brother and also lived at 35 Seidengasse, along with his wife Bertha (nèe Kohn) and their two daughters Renée and Denise who had been born in Vienna. Sally, the third oldest Nussenblatt sibling, lived with her husband Adolf Scheiner and their Vienna born daughter Nellie at 22 Währingerstraße in the 9th District. Lina, the fourth oldest of the Nussenblatt siblings born in Stryj, lived with her husband Max Knoll and her Vienna born son Paul at 21 Lindengasse in the 7th District.

On February 24, 1907 Berta, the second oldest of the Nussenblatt siblings, married the businessman Siegfried (Salomon) EISENBERG in Vienna’s Polnische Schul Synagogue at 29 Leopoldsgasse in the 2nd District. Her husband had been born in Suczawa Bukovina at the eastern end of the Austro-Hungarian Empire (Suceava Romania since 1918) on July 19, 1880 and had lived in Salzburg since 1902 — where he had established the S. Eisenberg general store at 3 Makartplatz (in the Hotel Bristol). The couple had five children. Nelly (Petronella) was born in Vienna on December 22, 1907 in Vienna while her younger siblings were all born in Salzburg — Paula on March 6, 1909; Edith on October 7, 1910; Walter on February 29, 1912; and Robert on September 7, 1919. The EISENBERG family had local citizenship rights in Salzburg and since the birth of their youngest child Robert they lived in the corner house at Lessingstraße 6 / Rainerstraße 17 in the Elisabethvorstadt neighborhood that belonged to the Jewish couple Gottlieb and Hermine Winkler.1

On March 26, 1924 Siegfried EISENBERG died in Vienna at age 43 and he was buried in the Jewish section of the Vienna Central Cemetery (Tor IV, Grab 4/31/43). His early death left his widow with 5 minor children to care for in Salzburg. She continued to run the S. Eisenberg store in a reduced form, specializing in women’s fashions, but when Jews were especially hard hit by both the economic crisis and the virulent Antisemitism in the midst of the Great Depression of the 1930s Berta Eisenberg sold her shop on the Makartplatz. Her children Nelly, Edith and Walter had already left Salzburg because they foresaw no future for themselves here. Later the widow and her children Paula and Robert also had to leave Salzburg. On October 18, 1940 Paula gave birth to a daughter named Leah.

The 57 year old Berta Eisenberg, her 32 year old daughter Paula and Paula’s daughter Leah were living together at 32/2/16 Kandlgasse in Vienna’s 7th District in late 1941. On December 3, 1941 they were among the Austrian Jews deported in the first of four transports from Nazi Vienna to Riga in German occupied Latvia (»Reichskommissariat Ostland«). In March 1942 they were murdered in the nearby Bikernieki forest in »Aktion Dünamünde« — as was reported by a survivor from the massacre who had crawled out of the pit dug for the victims.

Tamar Berta also told us about the fates of her great grandmother’s siblings. Her older brother Adolf Nussenblatt, his wife Mina and their nephew Paul Knoll were able to escape from Vienna to England in 1938. Berta’s younger sister Lina (Lea), who had been born on September 29, 1893 in Stryj, and her husband Max Chaim Knoll (the parents of the Paul Knoll who survived in England with the Nussenblatts) were arrested in occupied Belgium and interned in Camp de Malines before they were deported to Auschwitz on August 15, 1942 where they were murdered.

Only in 2012 were the members of the family able to learn the fate of Berta Eisenberg’s younger brother. Hersch (Heinrich) Nussenblatt3, who had been born in Stryj on June 26, 1895, was arrested by the SS in Lacaune (a place in southern France where he had sought refuge) on February 20, 1943 and sent to the Drancy transit camp outside Paris. On March 4, 1943 he was deported on Transport 50 to the Majdanek concentration and extermination camp where he was murdered. His wife and their two daughters survived their persecution and were able to emigrate to the US after France was liberated. They lived in California and Hersch’s widow Bertha died in Los Angeles in 1969. Denise, the younger of their Vienna born daughters died in Burbank in May 2012 at age 86. Renée, the older daughter, died in Los Angeles in September 2012 at age 91.

The Israeli great grandchildren of Berta Eisenberg were only able to establish contact with their American relatives in 2012 when Tamar Berta received the memoir that the then 80 year old Renée had written in May 2000 about her escape routes in Nazi occupied France. Renée recalled her short reunion with her cousin Nellie who had also survived the terror. Nellie’s mother Sally Scheiner, who was Berta Eisenberg’s younger sister and had been born in Stryj on January 7, 1886, was killed in an »unknown camp« according to the Yad Vashem Shoa Data Bank.

Berta Eisenberg, her daughter Paula and the little Leah remain in the memory of the city of Salzburg.

For the first time in 70 years Leah Eisenberg will have a memorial along with those of her mother Paula and grandmother Berta – members of three generations of a family who were wiped out together near Riga in March 1942. The Dünamünde massacre was carried out by the Nazi German occupying forces in Latvia’s Bikernieki forest near Riga. Its objective was to kill the Jews who had recently been shipped to Latvia from Germany, Austria, Bohemia and Moravia. These murders are sometimes separated into the First Dünamünde Action, occurring on March 15, 1942, and the Second Dünamünde Action on March 26, 1942. About 1,900 people were killed in the first action and 1,840 in the second.

A neighbor of Berta was a good friend of the family who survived the massacre. After the war he located my grandmother Edith (one of Berta’s daughters) to inform her about their fate. He reported:
When Paula understood they were all going to be killed, she begged for Leah’s life. In response, the soldiers began to laugh and tore Leah from her mother’s arms. Some of them held Paula’s hands and face so she would not be able to look away or close her eyes while the others were slamming Leah on a stone, crushing her head and body. Berta was a short distance away from them. As she heard her daughter screaming, instinctively she started to run towards her. Another group of soldiers who were standing nearby stopped her, took her to the edge of the previously dug mass grave and shot her. Afterwards, while laughing and very much enjoying the scene, Leah was thrown into the grave and shortly after, Paula was shot in the head and was thrown into the grave as well.

The stolperstein for Leah and the updating of this web page about Berta’s brothers’ and sisters’ fates would not have been possible without Mr. Gert Kerschbaumer who made it possible. After a non-stop search in the Austrian archives, spending days and nights over a whole year to retrieve details, Mr. Gert Kerschbaumer managed to reunite family members and revive their »being« – the names and fates behind the numbers.

There are and can be no words to describe our family’s gratitude to the one and only Gert Kerschbaumer, as well as to Mrs. Doris Kerschbaumer, Mr. Mag. Eckstein Wien, Mr. Gunter Demnig, the Salzburg Stumbling Block Committee and to the city of Salzburg for their contribution to this amazing and human project.

We are all committed to deliver a clear message! All people are created equal, regardless of race, religion or sex.

1 The two properties in Salzburg at 6 Lessingstraße (17 Rainerstraße) and 19 Schlachthofgasse (15 Rainerstraße) had been owned by the Jewish couple Gottlieb and Hermine Winkler since 1913 and 1914 (respectively). After she was widowed in 1922 they belonged to the widow Hermine Winkler. After her death in 1937 she left the two buildings to Engineer Hugo Winkler, the Mensa Academica Judaica, the Chevra Kadisha Jewish Burial Society and the Israelite Institute for the Blind. But before the property could be transferred formally the Nazis took over Austria and both buildings were confiscated and »Aryanized« (6 Lessingstraße was turned over to Liselotte Niedermüller-Zojer while 19 Schlachthofgasse was given to Lorenz and Olga Deutschmann). After 1945 the American occupation authorities turned the property over to the Jewish Community and it housed a temporary synagogue for about a year. In the early 1950s official ownership was gradually transferred to Hugo Winkler and the Jewish Community and it remained in their possession until 1999 (property register Salzburg-Froschheim EZ 225 and EZ 228).

3 Hersch (Heinrich) Nussenblatt is not the Herzl researcher »Tulo« Nussenblatt who appears in the Deutschen Biographie. »Tull« Naftali Nussenblatt was born in Stryj on March 4, 1895. »Tulo«, the son of Sara Taube Körner and Israel Juda Nussenblatt. He and his wife Tamara Gutman, who last resided at 2 Seegasse in Vienna’s 9th District, were murdered in an unknown concentration camp. 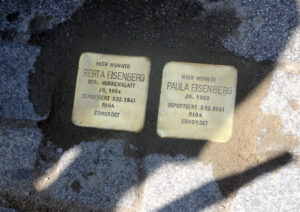 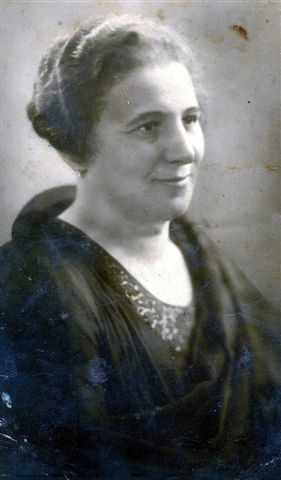 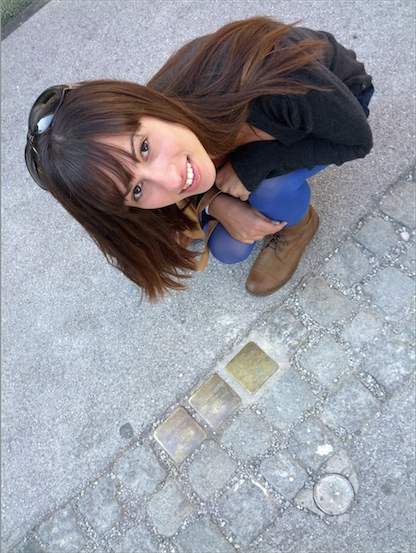 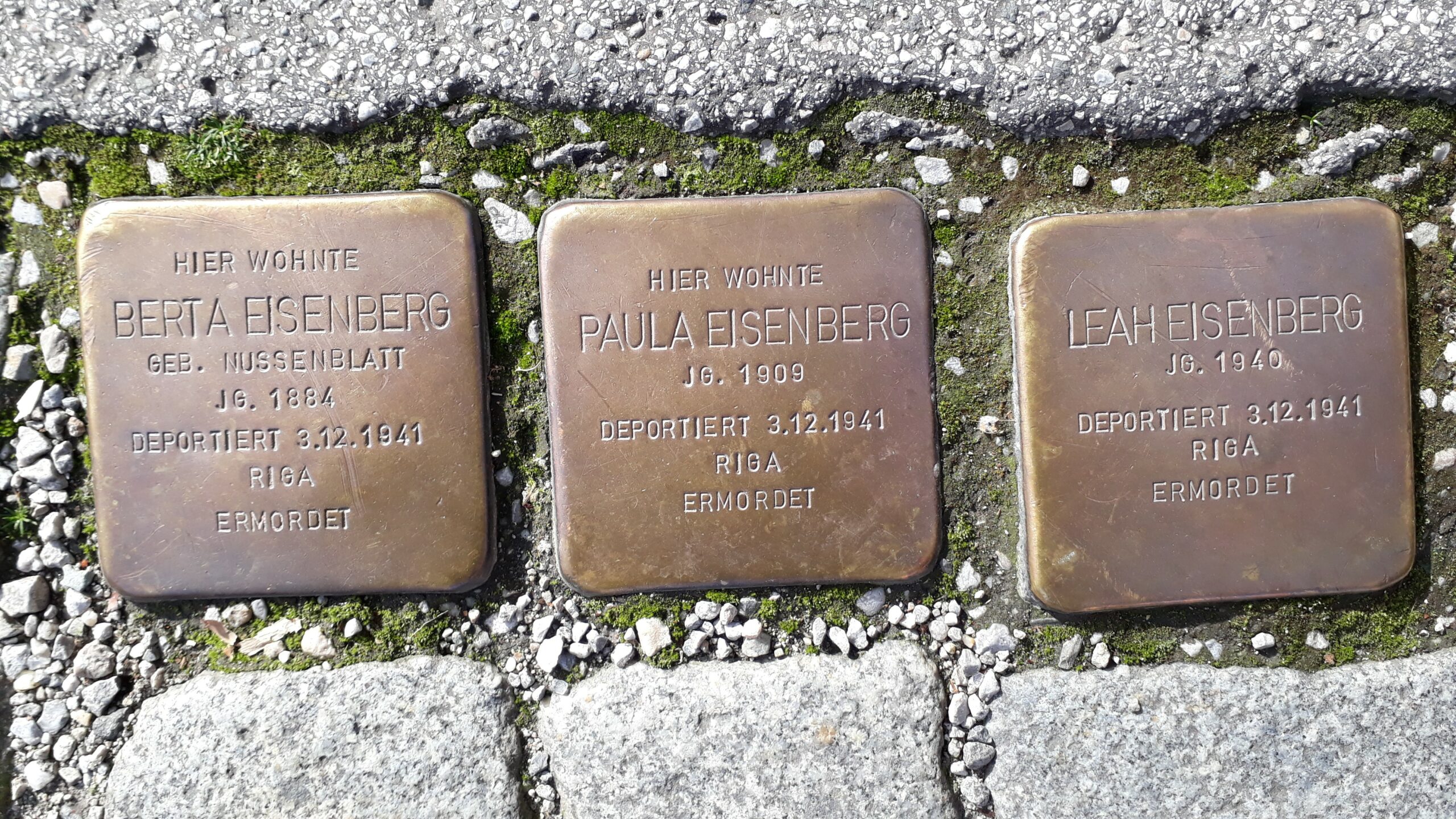 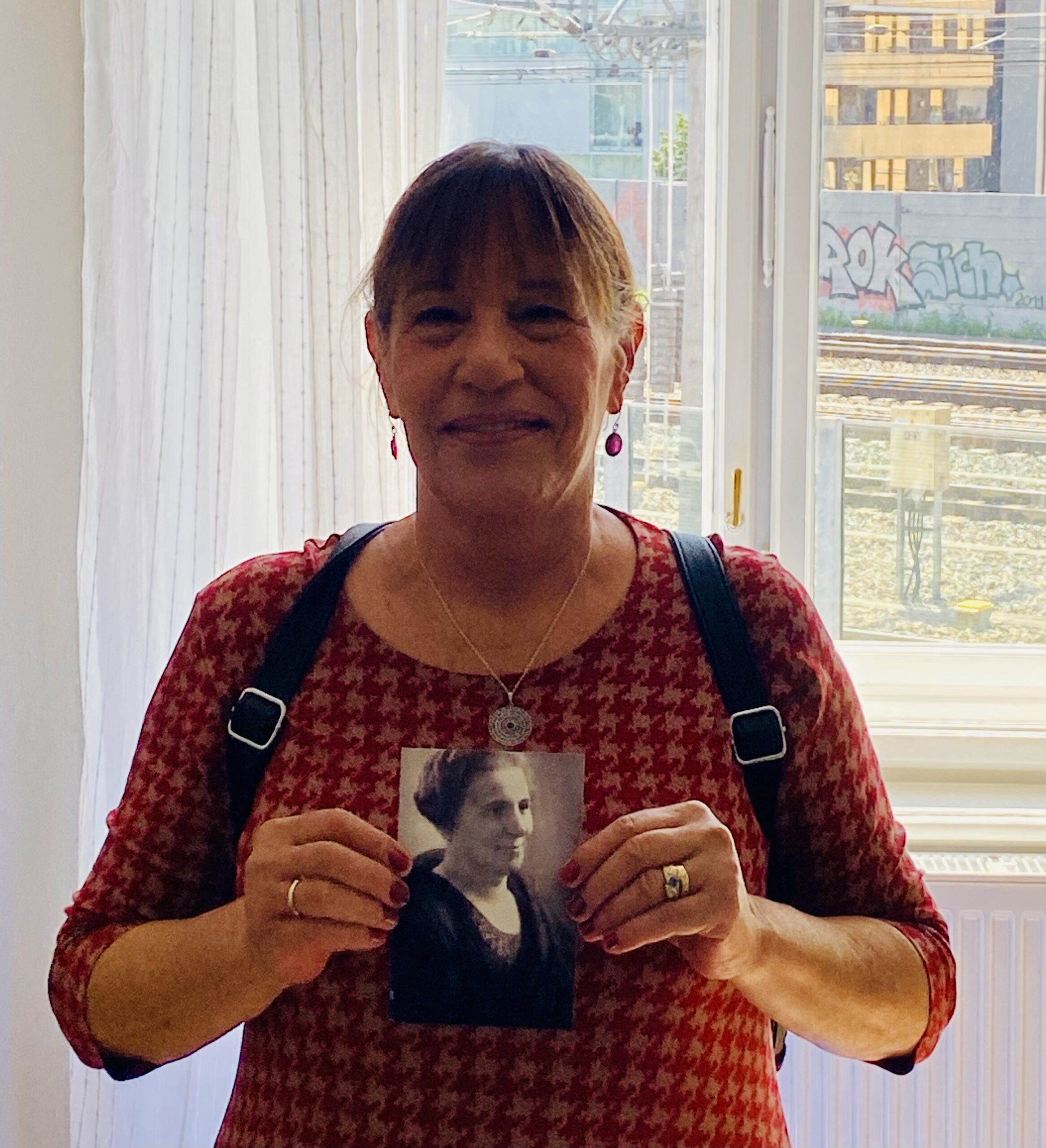 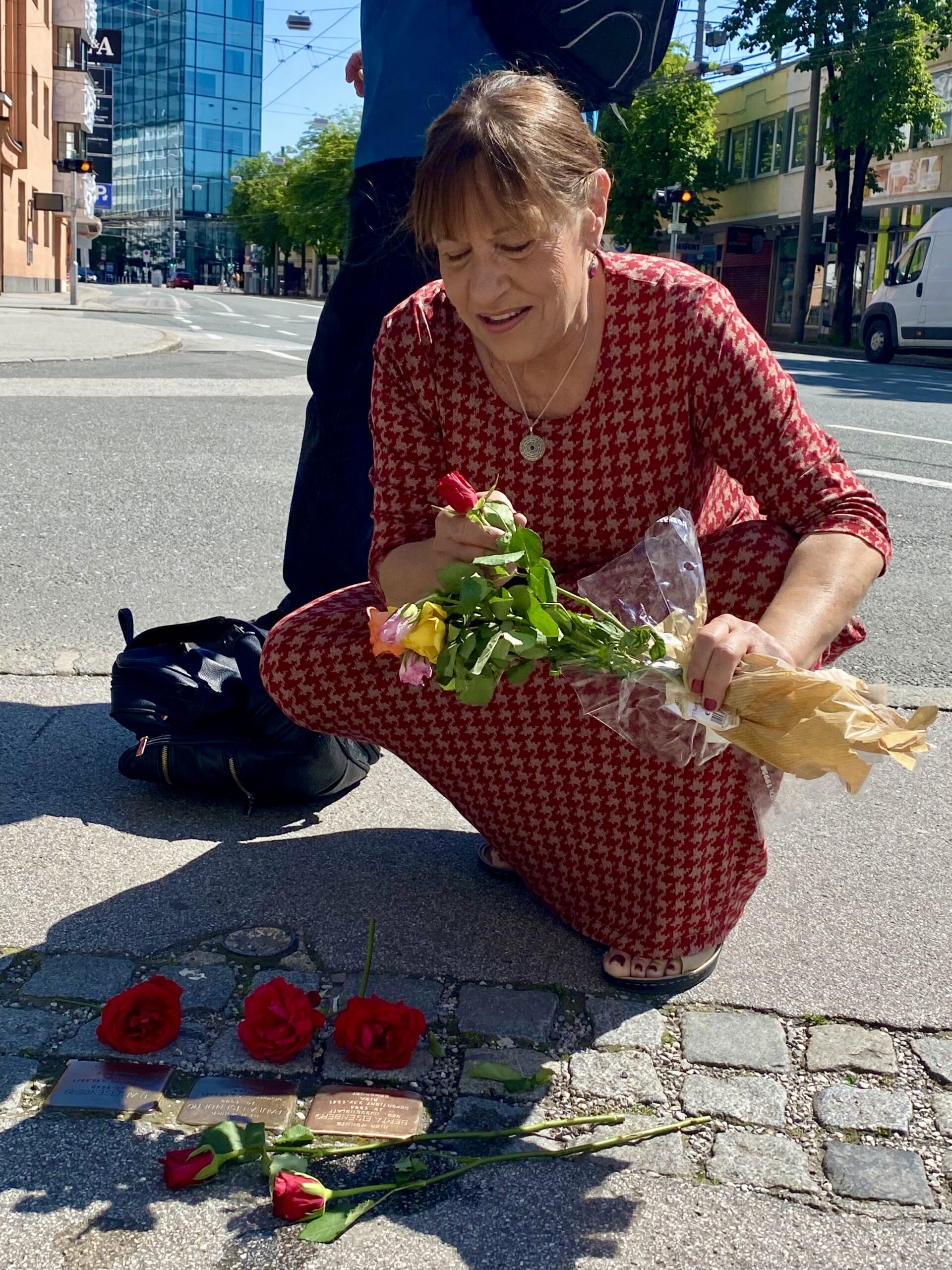 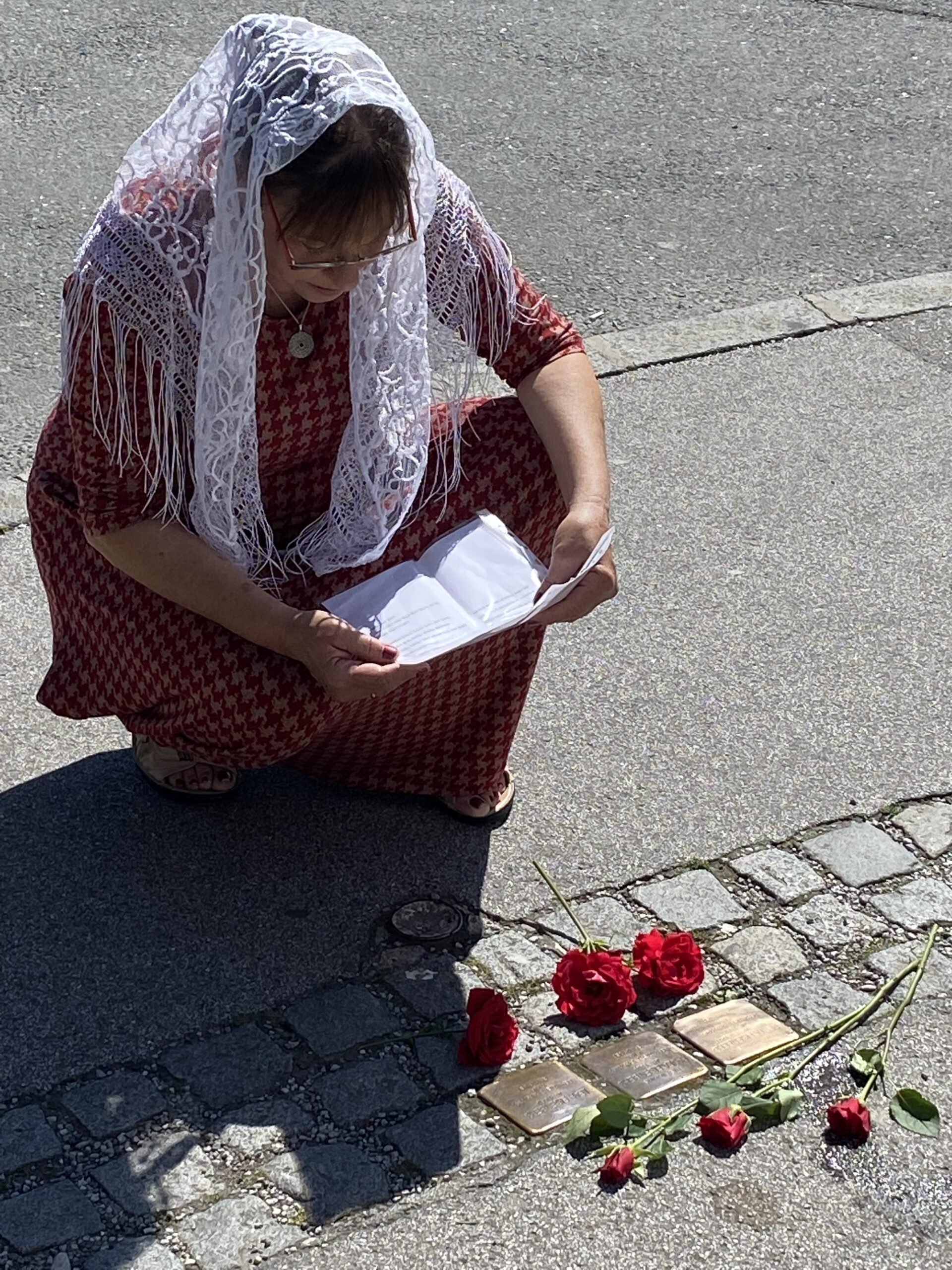 All stumbling stones at Lessingstraße 6