Dr. Ernst LANGFELDER was a lawyer who had been born in Vienna on August 26, 1892 as the youngest child of the Jewish couple Katharina (née Engländer) and Jakob Langfelder. In 1913 he converted to Lutheran Protestantism (Augsburg Confession). His wife Gertrude was a Protestant from Gmunden in Upper Austria who had a young daughter from her first marriage that was supported by Dr. LANGFELDER. Starting in 1937 the LANGFELDER family lived at 4 Pfeifergasse – which belonged to the composer Viktor Keldorfer. Dr. LANGFELDER, who was a member of the Salzburg bar association, also had his law practice there.

In May 1938, shortly after the Nazis took over Austria, Dr. LANGFELDER was prohibited from practicing law (the Salzburg Bar Association acting director who implemented this in 1938 was Dr. Robert Lippert)1, leaving the family without any income. The »Aryan« wife of a Jew was denied the right to work and her »Aryan« child was not allowed to live in the same household with a Jew, so Dr. LANGFELDER felt he had to agree to a divorce and leave Salzburg. That enabled his wife to get a work permit so that she could care for herself and her daughter. The two of them continued to live in Salzburg, and until 1949 they stayed in the building of composer Viktor Keldorfer, who showed a lot of understanding for the plight of his tenants.

In December 1938 Dr. LANGFELDER moved in with his older sister Julia in Vienna. The last address for the two of them was above the famous Café Hawelka at 6 Dorotheergasse in the 1st District. It was the deportation address for more than 40 Jews. The siblings Julia and Dr. Ernst LANGFELDER were deported to the occupied Soviet Union (Reichskommissariat Ostland) on May 27, 1942 – in »Transport Train 204« with about 1,000 other Jews. They were murdered in the Maly Trostinec death camp near the city of Minsk on June 1, 1942.

Ludwig, the older of the LANGFELDER brothers escaped deportation by committing suicide in Vienna on March 13, 1938. The younger siblings managed to escape to the free world, brother Fritz to Australia and sister Grete Katz to the US (Grete lived in New York until her death in 1969). The grave of their parents is located in the Jewish section of the Vienna Central Cemetery.

After the liberation of Austria Dr. LANGFELDER’s divorced wife was able to provide evidence ofa forced divorce under the Nazi regime that entitled her to victim’s compensation that included a retirement pension – thanks to the help of her Salzburg attorney Camillo Peyrer-Angermann and her friend Wilhelm Kaufmann (a well-known Salzburg artist). Gertrude Langfelder died in her home town of Gmunden in 1984.

1 Four other Jewish attorneys were banned from practicing law in Salzburg: Dr. Julius Pollak and his son-in-law Dr. Franz Grün, 8 Makartplatz (both Jewish, married, exile in Argentina), Dr. Richard Weinberger, 4 Lederergasse (Jewish, single, exile in Shanghai, returned to Salzburg after 1945), Dr. Josef Weihs, 2 Rainerstraße (a Catholic convert married to a Catholic, two children, survived the Nazi regime in Salzburg). Dr. Robert Lippert, the Bar Association acting director who was responsible for implementing the prohibition against Jewish attorneys practicing law in Salzburg, was interned from 1945 to 1947 in the Marcus W. Orr prison camp for SS members and Nazi Party officials (commonly known as the Glassenbach Camp). In 1958 he was made a member of the Salzburg municipality Senate Council. 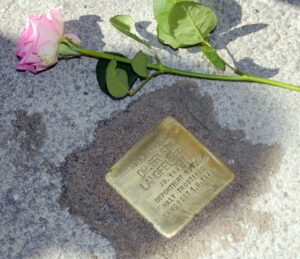 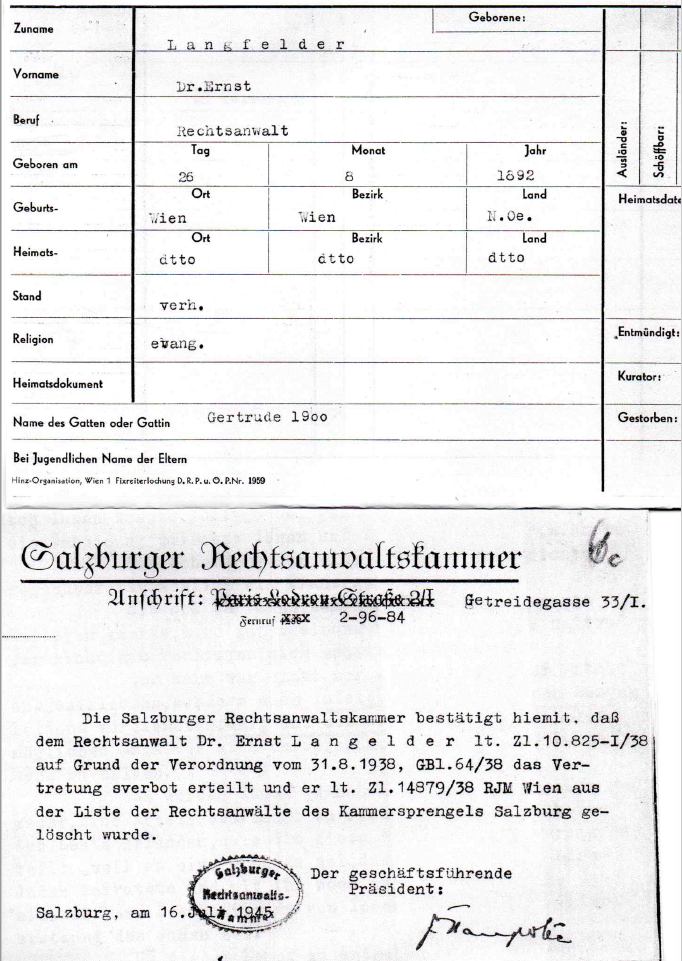 All stumbling stones at Pfeifergasse 4