Hermann KOLLER was born in Salzburg on June 12, 1911. He was a married waiter and had local citizenship rights in Salzburg. He and his wife had lived in the Scherzhauserfeld public housing project in the Lehen neighborhood and his last residence was at 18 Gärtnerstraße in the Maxglan neighborhood.1

Hermann KOLLER didn’t belong to any resistance group, but he was identified as an opponent of the Nazi regime. Presumably he was denounced and persecuted on political grounds. Despite the paucity of police, court and victims’ aid documents it is clear that he was arrested by the Gestapo on March 20, 1943 and imprisoned without any judicial process. There is a data framework for what followed: 31 year old Hermann Koller was deported to the dachau concentration camp on May 17, 1943 where he was registered as »protective custody« prisoner number 47862, on December 6th he taken to the Mauthausen concentration camp, and on January 9, 1944 he was transferred back to Dachau and registered as »protective custody« prisoner number 61310. On May 12th he was transferred to the Natzweiler-Struthof concentration camp in Alsace and then on September 6, 1944 he was returned yet again to Dachau and registered there for the last time – this time as »protective custody« prisoner number 102125.

The 33 year old Hermann KOLLER was murdered in the Dachau concentration camp on March 21, 1945, just 38 days month before the camp was liberated. His wife had already divorced him and his death was noted in the police registration files of the city of Salzburg. 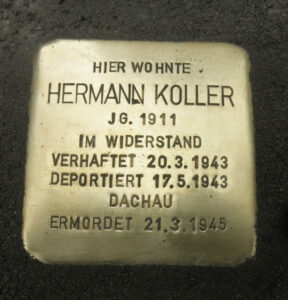 All stumbling stones at Gärtnerstraße 18