Maria Aigner was born in Salzburg on March 10, 1915. She was an unmarried Catholic who was the daughter of a master painter from his first marriage. Her mother had died young and her father had remarried. As a result of an illness Maria was incapable of learning a trade and was a patient at the Konradinum Eugendorf, a Salzburg State institution that was run by the Salzburg Sisters of Mercy of St. Vincent de Paul.

In November 1938 (after the Nazis had taken power in Austria), Maria Aigner was transferred to the Schloss Schernberg nursing home in Schwarzach in Pongau (about 70 km south of the city of Salzburg) that was also run by the Sisters of Mercy. Anna Bertha Königsegg, the Visitor (Inspector) for the Sisters of Mercy’s Salzburg Province, had protested bravely against the Nazi’s »Euthanasia« program to murder the severely handicapped, but after she was arrested by the Gestapo on April 16, 1941 the order’s patients lost her protection. Thanks to the bravery of her co-workers 17 patients were rescued, but the rest were rounded up to be murdered.

The 26 year old Maria Aigner was one of the 115 patients who were deported from Schernberg to the Hartheim killing center on April 21, 1941 – where they were murdered shortly after their arrival. As with all the victims of the Nazi’s secret »T4«1 murder program her death was not recorded in the police registration records of the city of Salzburg. Maria’s father died in Salzburg in 1944.

1 The »T4« murder program was called that because its headquarters in Berlin were located at Tiergartenstraße 4. 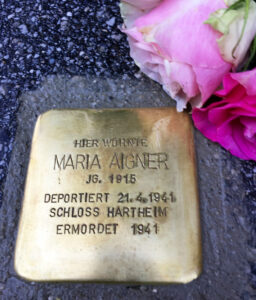 All stumbling stones at Schallmooser Hauptstraße 17