Hugo ROSENBERG was born in Bielitz, on the eastern border of Austrian Silesia, on May 15, 1894 (in 1920 it became part of Poland and is now known as Bielsko-Biala). He was Jewish and moved to Salzburg when he was 15 years old so he could learn tailoring and business in the shop of his uncle Emanuel Rosenberg. Emanuel’s wife Irene was a relative of Walter SCHWARZ, co-owner and managing director of the S. L. Schwarz department store at number 12 Alter Markt. In the 1920s Hugo ROSENBERG became a commercial agent in the Schwarz’ department store and for a while he lived with Walter Schwarz’ family.

On March 16, 1932 the 37 year old Hugo ROSENBERG married a 21 year old non-Jewish Salzburger in the office of the Salzburg magistrate. His bride had had an illegitimate child who was legitimized by her marriage to ROSENBERG when he acknowledged paternity. The child then took the name Rosenberg. The family lived for a while at 29 Bergheimerstraße, in the Froschheim neighborhood of Salzburg – which is officially part of the Elisabethvorstadt. Later they moved a short distance to 28 Josef Mayburger-Kai which is on the Salzach riverfront. It was their last joint address. For 28 years Salzburg was the center of Hugo ROSENBERG´s life. He was able to live here without official harassment even though he never gained citizenship in the Austrian Republic or the official residency in Salzburg that would have been needed for it – at least until 1938.

His marriage collapsed under the Nazi regime. At the beginning of August 1938 Hugo ROSENBERG had to move out – to »Bielitz, Poland« according to the police register in Salzburg. In fact he lived with his cousin Elsa Rosenberg at 16/1/9 Hermanngasse in Vienna’s 7th district from August 2, 1938 until May 29, 1939. The Vienna police register lists his citizenship as »Polish«.

On January 13, 1939 Hugo ROSENBERG had to appear in a Vienna courtroom to answer his wife’s divorce filing claiming that she felt an insurmountable aversion to the »full Jew« who she now claimed was not the natural father of her child. Hugo ROSENBERG put neither his marriage nor his paternity in question and remained silent about the weaknesses and missteps of others. The divorce process dragged on nonetheless and the decree was issued in Nazi Salzburg long after Hugo ROSENBERG had ceased to live in Vienna: his notice was marked »Recipient address unknown« on March 2, 1943.

Research on Hugo ROSENBERG’s fate has failed to produce any results so far: missing in Poland, murdered or survived, out of sight, out of mind? Recent investigations have discovered that his daughter Gertrud emigrated to the USA in September 1949 and married there. She died in Denver on October 15, 2004. It is worth noting that her death notice confirms that Hugo ROSENBERG was her father 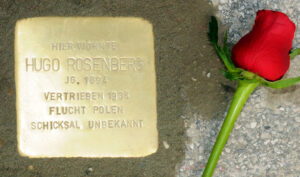 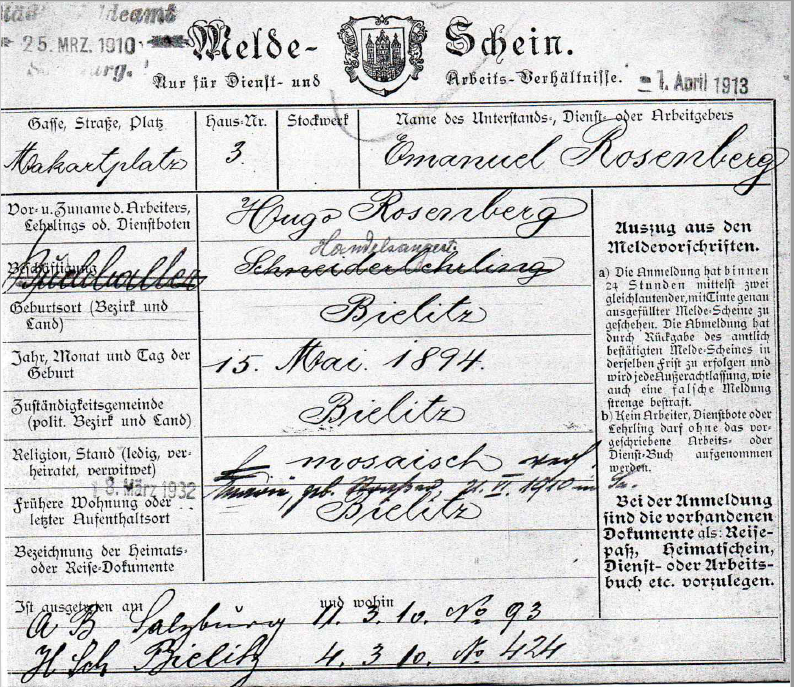 All stumbling stones at Josef-Mayburger-Kai 28