Franziska TISCHLER was born on am 7. February 7, 1923 in Stubach bei Uttendorf (an Alpine village c. 110 km south-west of Salzburg). She was the daughter of Eva Neumaier, was married and had two daughters of her own who had been born in the war years 1939 and 1943 — Erika and Edith.

Near the end of the Nazi regime the two young girls lost their young mother. Franziska TISCHLER is one of the terror victims whose name doesn’t appear in either the 1991 book Dokumentation Widerstand und Verfolgung in Salzburg 1934-1945 [Documentation of Resistance and Persecution in Salzburg 1943-1945] nor in the databank of victims maintained by the Documentation Archive of the Austrian Resistance (DÖW).

But research has revealed that Franziska TISCHLER was arrested on the orders of the Salzburg Gestapo (number 2816 of July 17, 1944) in Stubach. She was transferred to the police jail on the Rudolfsplatz in Salzburg, but – like many other women arrested by the Gestapo – she was never brought before a court.

In the absence of any court records there is no way of knowing for sure whether or not she had any personal connections to anti-Nazi resistance workers at the Stubach hydropower plant — that produced electricity for the German RRs and was considered important to the war effort.

But it is documented that Josef Hera, a worker at the Stubach hydropower plant, was sentenced to death by the Vienna Regional Court for resistance and executed on June 21, 1944 and the close proximity in time suggests that there may well have been some connection between the two cases.

On August 13, 1944, the Salzburg Gestapo had Franziska TISCHLER, who was imprisoned in the police jail, deported to the Ravensbrück women’s concentration camp via Linz and Prague — together with twelve women from Goldegg im Pongau: Franziska TISCHLER arrived in Ravensbrück on August 27, 1944, and was registered as prisoner number 61395.

The exact date of her violent death cannot be determined because the SS destroyed the evidence of its crimes there before the concentration camp was liberated, including the death register.

What is certain, however, is that the 22-year-old Franziska TISCHLER did not live to experience the liberation of Ravensbrück on April 30, 1945.

It is also clear that her young children Erika and Edith, (who were looked after by their grandmother in Stubach) never received any victim’s compensation benefits in liberated Austria. 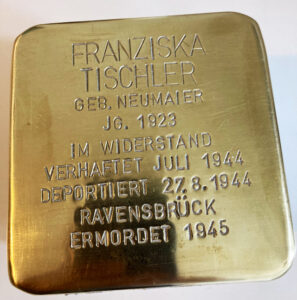