Josef GIRZINGER was born in the Upper Austrian town of Geinberg (near Ried in the Inn region) on June 14, 1897. He was a married Catholic who worked as an animal trader, and a coachman who owned his own rig. His wife had two children from her first marriage and the family had lived in Parsch since 1930 (Parsch was part of the town of Aigen until Aigen was annexed to the city of Salzburg in 1939).

GIRZINGER was never politically active, neither under the Austro-Fascist dictatorship nor under the Nazi Regime. Nonetheless he ran into trouble during the war years. The stagnating private sector made things increasingly difficult for small businessmen like GIRZINGER. There weren’t many tourists coming to Salzburg to take coach rides, so his income was no longer sufficient to support his family. In order to improve the family finances he signed up with the German army which was suffering from a shortage of drivers. He was fortunate enough not to be sent to the front and he served in the 18th Motorized Replacement Division which was stationed in Salzburg. But his military service turned out to be short anyway.

On September 19, 1942 he was declared »unworthy to serve« because of his indiscipline and lack of respect, and he was dismissed from military service.
GIRZINGER´s antimilitary attitude drew the attention of the Gestapo. On September 23, 1942, just a few days after he was dismissed he was arrested at home and held in the police jail. Less than a month later, on October 17, 1942 he was deported from there to the Mauthausen concentration camp where he was registered as »AZR«-Prisoner1 Number 13516. On December 21, 1942 Josef GIRZINGER was transferred to Mauthausen’s especially deadly Gusen Camp, where he died at age 45 on April 14, 1943 – the official cause of death was »general physical deterioration«. His death was recorded in the Salzburg police registration files.

After the liberation Josef GIRZINGER was recognized as a »victim in the fight for a free, democratic Austria«, which made his widow Gertraud eligible for victims’ compensation. She died in Salzburg at age 71.

1 »AZR« was an abbreviation for »Arbeitszwang Reich« [National Forced-Labor].
Sources 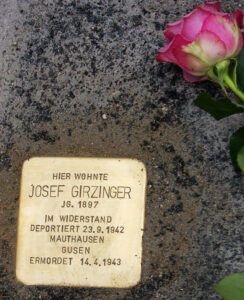 All stumbling stones at Judenbergweg 15