Viktor STÖCKLER was born in Braunau am Inn on June 4, 1877. He was Catholic and worked as a mechanics helper while living with a woman companion in the Maxglan community (which became part of the city of Salzburg in 1935).

He was hospitalized on several occasions and in September 1936 he was admitted to Schloss Schernberg, a nursing home in Schwarzach in Pongau (a rural region of Salzburg). The home was operated by the Merciful Sisters of St. Vincent de Paul which was led in Salzburg by Anna Bertha Königsegg.

Anna Bertha Königsegg bravely opposed the Nazis’ so-called »euthanasia« program to eliminate the handicapped, but when she was arrested by the Gestapo on April 16, 1941 the patients in the care of her order lost their protector. Her brave co-workers were able to rescue 17 of the patients from the Schloss Schernberg nursing home.

The 63 year old Viktor STÖCKLER was one of the 115 patients who were deported from Schloss Schernberg to the Hartheim killing center near Linz on April 21, 1941 where they were murdered.

As with all the other victims of the Nazis’ secret »T4« program1 his death was not recorded in the Salzburg police registration files.

His companion Maria died in Salzburg in 1951. 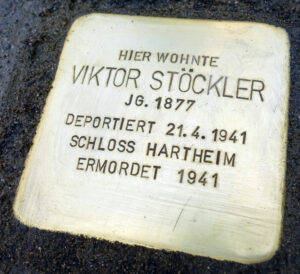 All stumbling stones at Maxglaner Hauptstraße 73