Adolf JACOBY was born in Aufhausen bei Bopfingen (which was in the Kingdom of Württemberg at the time, but which is now in the German state of Baden-Württemberg) on January 30, 1859. He was a member of one of several German-Jewish families that settled in the Austrian city of Salzburg after 1880 and who retained their German citizenship. These more or less distantly related families from Württemberg and Bavaria were named Baer, Bernheim, Dreifuß, Einstein, Jacoby, Leiter, Levi, Oppenheimer, Ottenheimer and Thalheimer.

The Salzburg branch of the Munich silk and velvet business Neuburger & Einstein on the Makartplatz and the wholesale business set up on the Residenzplatz by Albert Levi (who was also from Aufhausen) in 1884 were among the best known companies in Austria-Hungary. The high reputation of businessman and home owner Albert Levi was made clear when his death on March 20, 1913 was reported in the leading liberal bourgeois newspaper in Austria-Hungary, the Neuen Freien Presse — a rare and notable occurrence for a Salzburg Jew.

Albert Levi (who is buried in the Jewish cemetery in Salzburg-Aigen) had two sons who had been born in Munich, Julius und Fritz, as heirs but only the older of the Levi brothers had a son to carry on the family name: Albert, who was born in Salzburg on September 14, 1914 and who was named after his recently deceased grandfather.

Adolf JACOBY, who was related by marriage to Albert Levi, moved from Stuttgart to Salzburg in 1884 to work for Levi’s new business. When Levi’s sons showed no interest in taking over the business JACOBY became the business manager. In 1898 JACOBY married Emilie Oppenheimer who had been born in Heilbronn on the Neckar, Württemberg, on August 9, 1864 and they had two sons born in Salzburg: Fritz on October 1, 1899 and Hans on August 21, 1904.

At first the family lived on the Alten Markt in the Salzburg Altstadt, but later they lived on the first floor at 13 Hubert-Sattler-Gasse (which was built by the well known architect Jakob Ceconi early in the 20th century in the prosperous Andrä-Quarter where many of Salzburg’s better off Jews lived).

During the First World War the older son Fritz served as a German citizen in the German army on the Western Front. On March 8, 1918 he was killed in Flanders by an artillery shell — a heavy blow for the family. Adolf JACOBY’s wife Emilie died in Salzburg at age 62 on July 12, 1926 and was buried in the Jewish cemetery in Salzburg-Aigen. »In memory of Fritz Jacoby« was inscribed on her tombstone. The younger son Hans graduated from Salzburg’s Oberrealschule [a modern high school as opposed to a classically oriented Gymnasium] before apprenticing as a bookseller in Munich and Bonn.

In 1927 he moved to Den Haag in the Netherlands where he was employed at the Van Stockum bookstore, a business where he was eventually promoted to director. At the end of the 1930s his secure position enabled him to provide a refuge for his elderly father who had lived in Salzburg for 54 years.

Adolf JACOBY was targeted as a Jew by Salzburg’s Antisemites at least as early as the mid-1920s when his name was included in the »Jew Census« list of Jews to be boycotted that was printed in every issue of the »German-Austrian Protection Society and Antisemitic League« newspaper The Iron Broom (which was published in Salzburg from 1923 on after failing to make a go of it in Vienna).

When the Nazis took over Salzburg in 1938 Adolf JACOBY was a reclusive 79 year old widower with only one leg who lived in the family apartment with a housekeeper – he was able to flee to his son in Hans in Den Haag early enough so that he escaped the November 1938 »Reichskristallnacht« Pogrom in Salzburg.

In May 1940 Holland was occupied by Nazi Germany. Jewish refugees faced being interned in the Westerbork concentration camp that was set up in July 1942 as a »police transit camp for Jews« under German administration – where Jews were held until they could be shipped off to the death camps in the east. The Austrian Nazi Dr. Arthur Seyß-Inquart was the Reichs Commisoner in charge of the occupied Netherlands who was responsible for the terror and the deportation of over 100,000 Jews to the extermination camps.

Adolf JACOBY was able to avoid suffering internment thanks to his son Hans and died in Den Haag on January 2, 1943 at age 83. Hans, his wife, and their son all survived the terror in occupied Holland by going into hiding. Little is known about Adolf’s relatives who had remained in Germany. The lists of Shoah victims from Adolf JACOBY’s birthplace in Aufhausen include some Jacobys, Levis and Leiters (the maiden name of Albert Levi’s mother-in-law).

But most of the members of this extended German-Jewish family who fled from Salzburg survived: Ethel and Fritz Levi in England; Helene and Ernst Jacoby, Adolfine and Max Dreifuß, Mathilde and Leopold Ottenheimer and their sons Ludwig and Max in Argentina.

Albert Levi’s younger son Fritz, who had married an English woman named Ethel Arnold, died in Nottingham in 1958. But Fritz’ older brother Julius Levi, who had been born in Munich on March 8, 1878 and was the only member of the family who had local citizenship rights in Salzburg didn’t fare as well. His marriage failed and he lived under the Nazi regime in Vienna until January 11, 1942 when he was deported to Riga in German occupied Latvia and murdered.

Research suggests that Julius’ son Albert Levi, who had been born in Salzburg on September 14, 1914, may have been able to survive by changing his name. In any case he never returned to Salzburg.

The graves of Albert and Klara Levi, Ernestine Thalheimer (Klara Levi’s mother) and Emilie Jacoby are all in the Jewish cemetery in Salzburg-Aigen. In 1992 Hans Jacoby’s memoirs were published by the Van Stockum press that Hans had developed from the bookstore: »Ter herinnering: memoires van een boekverkoper als ooggetuige van de twintigste eeu«.

The next year he was one of the Jewish guests invited to visit by the City and State of Salzburg — otherwise he would never have returned to his home town.

This enabled him to visit the grave of his mother and his former residence at 13 Hubert-Sattler-Gasse. By that time Jacoby knew who had been the beneficiary of the Nazis’ seizure of his father’s apartment in Salzburg: the infamous Nazi Hermann Höfle.1

After the liberation in 1945 the Jacoby apartment was given to the resistance fighter and former inmate of the Dachau and Buchenwald concentration camps Guido Kopp.

1 On January 11, 1943 Adolf Eichmann received a coded radiogram from SS Sturmbannführer Hermann Höfle reporting on the number of Jews who had been murdered in the Lublin-Majdanek, Sobibor, Belzec and Treblinka death camps by the end of 1942: »… altogether 1,274,166.«
The British secret services intercepted and decoded the radio message, but it was kept secret until the year 2000. Its release brought the role of Salzburg native Hermann Höfle back to public attention [Peter Witte, Stephen Tyas, »A new Document on the Deportation and Murder of Jews during ‘Einsatz Reinhard’ 1942«, in Holocaust and Genocide Studies 15/3, pp. 468-486].
Hermann Höfle had been born in the Itzling neighborhood (that was part of the independent municipality of Gnigl until Gnigl was annexed to Salzbrg) on June 19, 1911 and was an auto mechanic and chauffeur in Salzburg who had joined the SS. In November 1938 he was one of the orgaizers of the attacks on Salzburg’s Jews and one of his rewards for a job well done was the former apartment of the JACOBY family at 13 Hubert-Sattler-Gasse, an apartment they kept until 1946.
During the war of extermination he served as »Jewish Expert« on the staff of Higher SS and Police Leader Odilo Globocnik, and he was the organizer of »Aktion Reinhard« — thus being one of the men most responsible for the mass murders of Jews in the Generalgouvernement of occupied Poland. Hermann Höfle returned to his family in Salzburg in 1947 and lived for years in the Parsch neighborhood while working as an auto mechanic for the city water department. In the course of the Eichmann trial his responsibility for the Shoah came to public attention and Höfle was arrested: he hanged himself in his prison cell in Vienna on August 21, 1962
[see: Winfried R. Garscha, »Das Scheitern des `kleinen Eichmann-Prozesses´ in Österreich«]. 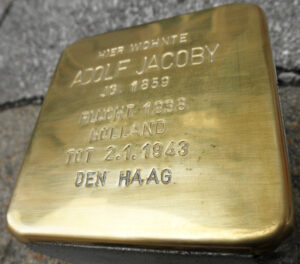 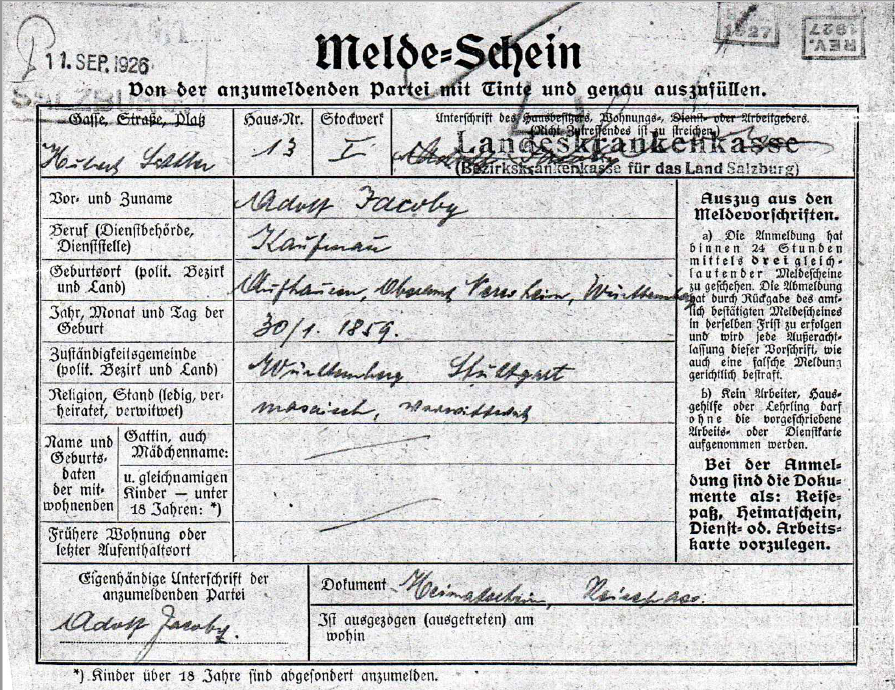 All stumbling stones at Hubert-Sattler-Gasse 13