Marianne WALLA was born in Vienna on April 9, 1905. She was the daughter of the unmarried Maria Anna Walla, who worked as a maidservant in the upper class Penzing district, and she was baptized in the Roman Catholic Church.

Early attempts to discover the artistic training of Marianne WALLA were unsuccessful, but further research discovered that she was one of the first graduates of the Reinhardt-Seminars in Schloss Schönbrunn. The leader of the seminar, which bore his name, was Max REINHARDT.

In the summer of 1930 the students, including Marianne WALLA, were able to present their skills in public for the first time. She played in Shakespeare’s Twelfe Night, Or what you will first in the Schönbrunn Court Theater, then in the Akademietheater, and later in the Mirabel Garden outdoor theater during the Salzburg Festival.

A Vienna critic wrote that Marianne WALLA »made a very good impression« as »Olivia«, and she unexpectedly moved up to take a major role in the Salzburg Festival when the prominent actress Lili Darvas left Salzburg in mid-season after a conflict with REINHARDT.

On the 26th, 28th and 20th of August 1930 the student actress Marianne WALLA played the role of »Good Works« in the Salzburg Festival production of Jedermann [Everyman].

Marianne WALLA successfully completed the Reinhardt-Seminar in 1931 and was immediately engaged to replay her Jedermann role in the 1931 Salzburg Festival – as she did in each of the following years through 1937.

For the Salzburg critics the Vienna actress was too unimportant to notice at first, but in 1935 they finally took note of her:

Marianne WALLA also performed in Bielitz [Bielsko] Poland, and St. Gallen Switzerland – as well as in the anti-fascist »ABC« Cabaret in Vienna in 1937-1938.

Especially noteworthy was her participation in Die Botschaft von Astoria and Königin der Broadway-Melodie [The Message From Astoria and Queen of the Broadway-Melody] by Jura Soyfer, who was persecuted by both the Austro-Fascists and the Nazis before he died of typhus in the Buchenwald concentration camp in February 1939. Soyfer was both Jewish and a Communist.

It can be assumed that the 33-year-old Marianne WALLA had to leave Nazi ruled Vienna for political reasons. In November 1938 she was in any case able to flee to England via Switzerland.

Finally, Marianne WALLA married the Englishman John M. Brice and died in Scotland as a British citizen in 1980. 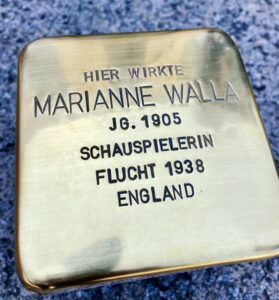 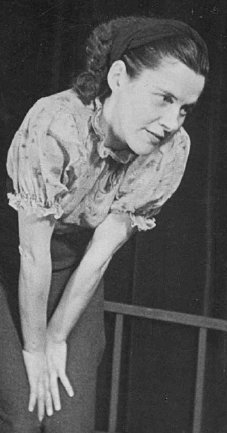