Margit BOKOR was born in Losoncz Hungary (which is now Lučenec Slovakia) on April 1, 1900 (1909)1. She was one of four or five children of the Jewish couple Malvine Wahl neé Goldschmiedt, and Géza Wahl (Váhl), an employee of the Hungarian Railroad.

We have only gradually been able to fill in the gaps in her biography. Research shows that Margit BOKOR converted to the Roman Catholic faith, married and had a child in her marriage to Sándor Bokor: Vera Margit, who was born in Budapest on August 27, 1920 and who lived there with her father or with her grandparents when her mother was performing in Germany.

The marriage of Margit and Sandor was badly strained by their long periods of living apart and they divorced in Budapest in 1938.

While her private life is not well documented, the artistic career of the opera singer Margit BOKOR after her graduation from the Budapest Music Academy is very well documented with numerous engagements in Leipzig, Berlin and Dresden from 1928 to 1933, and in Vienna and Salzburg from 1933 to 1938.

An important event for Margit BOKOR was the world premiere of the romantic comedy opera Arabella by Richard Strauss and Hugo von Hofmannsthal at the Dresden State Opera on July 1, 1933, a few months after Adolf Hitler came to power in Germany.

The Dresden opera director Fritz Busch had refused to cast the roles according to »racial« criteria, so the supporters of the new regime drove him out of his office and the director of the Vienna State Opera Clemens Krauss was employed to direct the Dresden premiere of Arabella in his place. And then the title role in the Dresden production wasn’t sung by Lotte LEHMANN, as intended but was sung instead by Clemens Krauss’ wife Viorica Ursuleac.

Casting decisions were always a touchy subject and in retrospect it is hard to tell to what extent they were politically motivated. So, for example, the non-Jewish soprano Angela Kolniak, who was originally announced to sing the role of »Zdenka« in Arabella was replaced by the Jewish Margit BOKOR so it is clear that Kraus wasn’t simply toeing the Nazi line in his casting, BOKOR reportedly sang the role of »Zdenka« (a girl who was supposed to be a boy) brilliantly, but while she may have been brilliant in the role, as she was a »full Jew« she had to leave Dresden and Germany immediately after the premiere.

Margit BOKOR became a member of the ensemble of the Vienna State Opera in September 1933 and made her debut as »Aithra« in the opera Die ägyptische Helena by Richard Strauss.

… I believe that by this engagement by the State Opera I have won a singer with an easy, high soprano in the style of Frau [Maria] Rajdl that has been missing from our ensemble for a long time.
Neues Wiener Journal, September 19, 1933, p. 5

In the summer of 1934, Margit BOKOR made her debut at the Salzburg Festival: debuting in four operatic roles in two festival weeks, on August 13 in the title role of the fairy opera Oberon by Carl Maria von Weber, newly staged by Bruno WALTER, choreographed by Margarete WALLMANN – a prominent Leading Team.

Critics looked at the new cast, for example the two Hungarian friends Rosette ANDAY as »Fatima« and Margit BOKOR as the Elf King »Oberon« (a male tenor role):

…In the other roles we encounter new artists; Above all the role of Oberon, which found in Frau Bokor an extremely graceful, convincing interpreter; the bright, sonorous voice, her youthful stature gives the Elf King full credibility and poetry. […]
The difficult role of Fatima fell to Frau Anday; she again proved her high musicality and culture of the presentation..

What is astonishing, however, was the strong presence of the soprano Margit BOKOR, who had been driven out of Germany. She participated in eight productions in the festival summers from 1934 to 1937: as »Oberon« in the opera of the same name by Carl Maria von Weber, as »Amor« in Gluck’s Orfeo ed Euridice, as »Aithra« in Die ägyptische Helena, as »Aufseherin« in Elektra and as »Octavian« in The Rosenkavalier by Richard Strauss, as »Cherubino« in The Marriage of Figaro, as »Blonde« in The Abduction from the Seraglio and as »Zerlina« in Don Giovanni by Mozart.

In the end Margit BOKOR received the best reviews for her role as »Zerlina« in an Italian Don Giovanni under the musical direction of Bruno WALTER that was called the »main highlight of the Salzburg Festival«:

[Karl Ettl as Masetto] has a counterpart in Margit Bokor as Zerlina who is excellent in both voice and acting.
Salzburger Chronik, August 3, 1937, p. 7

It was Margit BOKOR’s last summer festival. She was expelled from the Vienna State Opera in March 1938 – even before the Nuremberg Race Laws were imposed in Austria.

Then she made guest appearances in Amsterdam, Brussels and Antwerp. In July 1939 she traveled with her partner Paul Goldschmidt for a guest performance in Rio de Janeiro. After the outbreak of World War II she went from there to the USA. She arrived in New York on November 11, 1939 – it was her last place of life and work.

The biographies of displaced artists have been adequately researched. Their family members, however, are mostly out of sight, although their rescue was an urgent concern for them.

Margit BOKOR’s youngest brother Albert Wahl lived in New York. He successfully arranged for ship passages and the necessary guarantees, since his parents Malvine and Géza, his brothers Charles and Nicolas were able to enter the USA as »Hebrews« without any problems. They arrived in New York on September 9, 1939.

The identity of some family members remains unclear. The name Zoltan Wahl (born 1899) is recorded on the Shoah Memorial in Paris. Was he a brother or a cousin?

In any case the fate of Margit BOKOR’s daughter who had been born in 1920 and left in Budapest is clear. Vera Margit survived the terror years in Europe and lived in Paris after the war. She was apparently informed when her mother became seriously ill as she traveled to New York in October 1949.

Margit BOKOR’s last singing engagement was with the New York City Opera Company. On November 9, 1949 the 49 year old singer died in the Columbia-Presbyterian Medical Center of New York City – »… former leading lyric soprano at the Viennese State Opera«, was how she was described in an obituary.

Margit BOKOR was buried in New York’s Calvary Cemetery. Along with the dates of her life »1900–1949« and a cross, the names and dates of her parents are engraved on her tombstone: those of her father Géza Wahl who died in 1946, and of her mother Malvine, who died in 1950 – a year after Margit BOKOR’s death.

Margit BOKOR’s daughter Vera Margit stayed in the USA. She married there and died in New York at age 87 in March 2008.

1 According to the Vienna police registration files (Vienna City and State Archives) Margit BOKOR was born April 1, 1909 in Lučenec, and last registered in Vienna’s Fourth District at 38 Prinz-Eugen-Straße, mezzanine floor.
The birth year 1909 which is recorded there appears to be wrong. According to a passport issued for her by the Hungarian embassy in Vienna on June 28th, 1937, Margit BOKOR was born on April 1st, 1900 and that’s the year of her birth engraved on her tombstone. 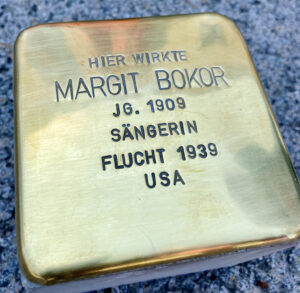 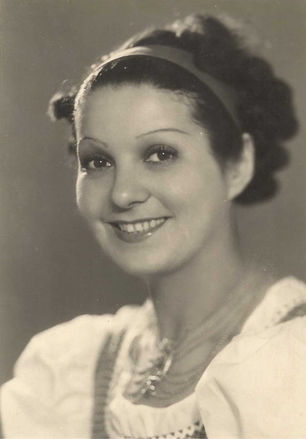 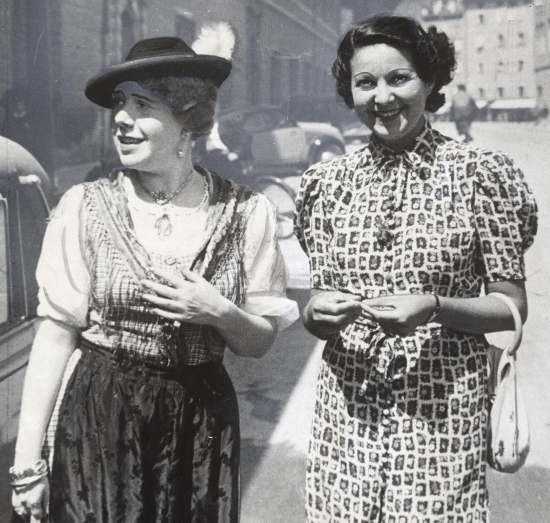 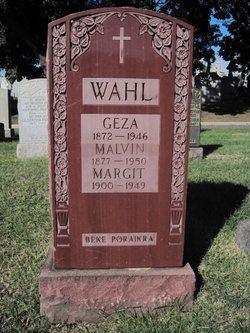