Maria KURZ was born Gnigl (which was annexed to Salzburg in 1935) in 1885 and was baptized Catholic. She was unable to learn a trade and was often committed to nursing homes and shelters.

Sometimes she worked as a maid and her last employment was at the Capuchin Sisters’ Loretokloster on the Paris-Lodron-Straße. After that she was a patient for a few weeks in the Sisters of Mercy’s Sacred Heart Asylum.

In August 1922 the 37 year old Maria KURZ was admitted as a long term patient in the Salzburg State Hospital. She was one of the 85 patients who were deported from there to the Hartheim Castle killing center near Linz on May 21, 1941 — where they were all murdered.

As with all the other victims of the Nazis’ secret »T4«1 program, the death of 56 year old Maria KURZ was not recorded in the Salzburg police registration files. She left no survivors as far as is known. 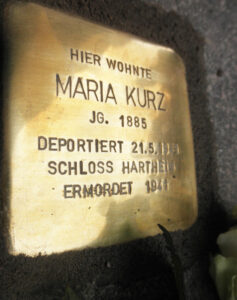 All stumbling stones at Paris-Lodron-Straße 6