Herbert SCHWARZ was born in Itzling (which was part of the Gnigl municipality before both were annexed to the city of Salzburg in 1935) on March 27, 1918.

Herbert SCHWARZ was unable to learn a trade and became a patient in the Salzburg State Asylum in 1935. He was one of the 82 patients who were deported from there to the Castle Hartheim killing center near Linz on April 17, 1941 — where they were all murdered.

As with all the other victims of the Nazis’ secret »T4«1 program, the death of this 23 year old man was never recorded in the Salzburg police registration files.

Herbert’s foster mother survived the terror years and died in Salzburg at age 73. His birth mother married in the US and died in Florida in 1989. 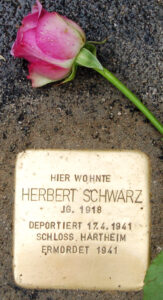 All stumbling stones at Itzlinger Hauptstraße 15