Maximilian (Max) HERMANN was born in Skala, Galicia (then in Austria-Hungary, later in Poland, and now in Ukraine) on January 3, 1888. He was a Jewish shipping agent and bookkeeper who moved to Salzburg from Vienna in 1912. He converted to Catholicism and married Paula Witzlsteiner in the parish of Mondsee in 1913.

They had two children, Herbert and Gerhard, both born in Salzburg and baptized as Catholics. The family lived in a city owned building at 118 Vogelweiderstraße in the Itzling-East (Schallmos) district.1

Max HERMANN was counted in the police register as a Catholic and during the first four years of the Nazi regime of racial persecution he was left undisturbed. Presumably he had failed to report his Jewish ancestry in the May 1939 »Special Census of Jews« or submitted a false declaration.

What is certain is that on February 26, 1942 the 54 year old family head was arrested at his home by the Gestapo and that he was transferred from the police jail to the Flossenbürg concentration camp on May 16, 1942. There he was registered as a Jew in »political protective custody« on May 18, 1942. Less than two weeks later, on the morning of the 29th of May, his violent death was reported with the notation »shot in the lung – internal bleeding while attempting to escape from camp«.

Max HERMANN’s mother Regina (Rifka) HERMANN had been born in Skala on May 27, 1865 and was murdered in the Theresienstadt concentration camp on April 4, 1943. Two of Max Hermann’s brothers were also among the victims of the Holocaust, according to the victim’s assistance file of Max’s widow.

The widow Paula HERMANN, who had lived in emergency shelters since December 1944, died in Salzburg in 19511. Max and Paula’s son Herbert had been born in Itzling in 1913 and was an auto mechanic. The Nazis classified him as a »Mischling 1. Grades« [Mongrel of the 1st degree] and imprisoned him in a forced labor camp in Thuringia from October 16, 1944 to April 16, 1945. After the liberation he was able to marry a woman with whom he had already had a son.

1 It was on the Baron Schwarz land running from 116 to 122 Vogelweiderstraße. The houses were badly damaged towards the end of the war and were demolished afterwards. The Schallmoos primary school is there now. 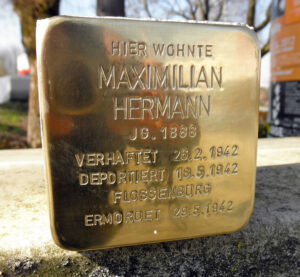 All stumbling stones at Baron-Schwarz-Park