Otto Kemptner was born in Hainfeld, Lower Austria, on August 19, 1890. He was a career officer in the Austro-Hungarian army and then a tax officer. He studied law and political science and had Doctorates in both Law and Politics – giving him the Austrian title of Dr. Dr.

He was also a Vienna member of a Franco-Bavaria Catholic University Association that was part of the influential Catholic Cartellverband (CV). Austrian Chancellor Engelbert Dollfuß, who ruled Austria as a dictator after March 1933 was also a member of the Franco-Bavaria association and he often appointed fellow members to political offices.

As a close confidant of the Chancellor, Otto Kemptner was entrusted with the development of an organizational base for the Austro-Fascist coalition called the Fatherland Front and he was promoted to the rank of Section’s Councilor in the Chancellor’s Office. He ceased to play any important role in politics after the suppression of the Social Democrats in February 1934.

Karl Maria Stepan then replaced him as Chancellor Engelbert Dollfuß’ confidant until Dollfuß was murdered by the Nazis on July 25 1934.

After November 1934 Otto Kemptner presided over the Salzburg State Financial Authority. His wife having died, he lived with his sister Emma on the third floor of 11 Getreidegasse in Salzburg. Not much is known about his political activities in Salzburg, but every once in a while he made a public appearance.

In January 1938 he gave a speech to a »Fatherland Rally« of the Salzburg Police led by Councilor Viktor Ingomar. These police were responsible for the prosecution of terrorist attacks by illegal Nazis during the Austrian dictatorship, so Viktor Ingomar and Ludwig Bechinie-Lazan, the heads of the police and security agencies, were among the first victims of Nazi revenge after the Nazis took over Austria.

As a former leading member of the Fatherland Front, Dr. Dr. Otto Kemptner was one of the prominent men arrested in Salzburg on March 12, 1938. He was allowed to return home, but he was arrested again on March 24th and held in »protective custody« [a Nazi euphemism for political arrest] in the police jail on the Rudolfsplatz.

Along with a priest named Leonhard Steinwender1 who was the former head editor of the Salzburger Chronik newspaper, he remained in police custody for more than six months without any judicial basis as they couldn’t be charged with any criminal acts. On October 15, 1938 Otto Kemptner was deported from the police jail to the Dachau concentration camp, where he was registered as »protective custody« prisoner number 19129.

After he was subjected to »special treatment« [a euphemism for torture] he was transferred to the Buchenwald concentration camp on September 26, 1939. He was released from there on October 12th – because of illness according to the Salzburg police registration files.

The 49 year old Otto Kemptner returned as a broken man and was nursed back to a semblance of health by his sister Emma until he was able to go to the former Pulgarn Monastery near Steyregg in Upper Austria.

It belonged to the St. Florian Foundation and during the Nazi years it served as a refuge for persecuted members of the Augustinian Canons.

Dr. Dr. Otto Kemptner entered the order to become a priest. On May 3, 1944 the 53 year old died from the effects of his mistreatment in the concentration camps.

1 Leonhard Steinwender was deported to the Buchenwald concentration camp on November 10, 1938 and was released from there on November 16, 1940. After the liberation he published the book Christus im Konzentrationslager [Christ in the Concentration Camp] (Salzburg 1946). 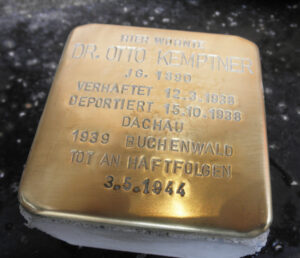 All stumbling stones at Getreidegasse 11