Dr. Karl BIACK was born in Tulln, Lower Austria, on September 12, 1900. As a Roman Catholic student he belonged to the Norica student association that was part of the influential Cartellverband (CV) [Federation of Catholic Student Associations] whose adult members dominated much of Austrian political and academic life in the twentieth century.

He was an administrative lawyer in government service and after 1936 he served as Federal Police Commissioner in Salzburg. Dr. BIACK was married to Edeltraud Siber, who also came from Lower Austria, and they had two children who were born in Salzburg: Karl-Heinz in November 1938 and Eleonore in February 1942. The family lived on the Prälat-Winkler-Straße in the upper middle class district of Parsch – which was given that name under the Austro-Fascist dictatorship in honor of Canon and State Governor Alois Winkler.

It is well known that political, police, and judicial leaders who were involved in prosecuting Nazis for bombings and other terrorist attacks during the Austro-Fascist dictatorship were among the first victims of the Nazis when they took over Austria. When the first Gestapo transports to the Dachau concentration camp began to roll in April 1938 the purge of the higher administrative offices of officials recruited from the educated Catholic strata-mostly members of the CV and the »Fatherland-Front« [the Austro-Fascists’ main political organization] – was already completed.

Police officials like Dr. Karl BIACK and Dr. Max Platter, and district officers like Dr. Rudolf Hanifle and Dr. Franz Seywald had already been removed from their posts in March 1938 – supposedly »retired«. They were sidelined and placed under police observation as suspected political opponents.

Forced into early retirement, the police attorney Dr. BIACK began to study medicine in Innsbruck for a few semesters, but the shortage of qualified personnel during the war led to his being recalled in 1943 and being put in charge of the economics office of the city of Traunstein in Bavaria [about 25 miles west of Salzburg]. The BIACK family continued to live in the Parsch district of Salzburg near several other families with whom they were close friends – six Catholic bourgeois families with 29 members, including all the adults and minor children.

All six were headed by fathers with academic educations: Dr. Karl BIACK (two children), Dr. Rudolf Hanifle (two children), Dr. Max Platter (three children), Diploma Engineer Albert Schmiedinger (two children), Dr. Franz Seywald (three children) and Dr. Josef Tinzl (five children) – an intimate circle that fell into the clutches of the Gestapo. The Gestapo claimed that in the fifth year of the war the Seywalds’ and Biacks’ homes served as »centers for listening to enemy radio broadcasts« [which was a criminal act in Germany during the war] and places where »subversive Habsburg separatist discussions« took place. During the investigation the Gestapo was told by an informer that subversive political jokes were repeated in Dr. Seywalds’s home: one poorly recorded or mutilated joke marked with three exclamation points »compared our Führer to a small farmer with a fat pig (our Reichsmarschall [Hermann Göring]) and a ‘spoiled dog’ (Reichsminister Dr. Goebbels)! ! !«

On March 20-21, 1944 the Gestapo arrested twelve people supposed to be part of this »listening circle«, and another who was »set free«. The Gestapo’s request for prosecution hasn’t survived, but we know that the judicial process that followed from this denunciation concluded that the twelve »accused subversive listeners« and »radio criminals« were guilty of spreading news from forbidden »enemy broadcasts« (in violation of §§ 1 & 2 of the broadcasting regulations of September 1, 1939) and thereby engaging in a »conspiracy to commit treason« (§§ 80 & 83 of the Reich Criminal Code). From that we can conclude that the Gestapo complaint was designed to bring the accused before the Nazi’s so-called »Peoples’ Court« in Berlin where they would quickly be sentenced to prison or death.

From the April 13, 1944 arrest order of the investigating judges of the Salzburg Regional Court it appears that eleven of the twelve accused were being held in the Salzburg jail under investigative custody suspected of »broadcasting crimes and conspiracy to commit treason«. They were Dr. Seywald and his son Gottfried – Mrs. Seywald had been set free pending further action, Dr. Tinzl, and the married couples Hanifle, BIACK, Platter and Schmiedinger. Finally it was up to the chief prosecutor whether they would be tried as »traitors« by the Berlin »Peoples’ Court« or the Vienna Superior Court. This was a life or death decision for the accused who knew that the »Bloody Senate« of the »Peoples’ Court« generally issued death sentences.

On June 17, 1944 the chief prosecutor in Berlin requested that the twelve accused from Salzburg would be tried by the »Peoples’ Court«. The charges took up 23 pages. At this time the accused didn’t know where they would be tried – or who would be the chief judge. Presumably they knew that a Senate from the »Peoples’ Court« had held court in the Salzburg courthouse on several occasions. But the proceedings of the 1st Senate under the lead of the »Peoples’s Court’s« infamous president Roland Freisler that took place in the Salzburg courthouse on July 21 & 22, 1944 were unique. It was right after the failed assassination attempt against Hitler. Freisler’s verdict and its justification »in the name of the German People!« have never been published in full (the book: Dokumentation Widerstand und Verfolgung in Salzburg 1934-1945, that was published in 1991 only has the short charge sheet).

Roland Freisler’s verdict in the proceedings against eleven Salzburgers accused of »conspiracy to commit treason« begins with the legal phrase: the 1st Senate has »taken legal notice in the name of the German People!« that Franz Seywald and Karl BIACK »have severely attacked the confidence and strength of those who are fighting bravely for out freedom and have used the subversive propaganda of our wartime enimies for that purpose. You are forever dishonored and will be punished with death«. Freisler justified the death sentence for Dr. Karl BIACK by saying that he had denied his crime to the police [Gestapo] and had only confessed after a co-defendant had done so – and then only afte the police had threatened to send him to the Dachau concentration camp and had promised him an early realease from imprisonment if he confessed.

BIACK had withdrawn this confession to the investigative judge, but Freisler had no doubt that the confession that the Gestapo had extorted from BIACK was legitimate, »or at least didn’t incriminate him any more than his real guilt«. It is easy to see from that comment that as chief judge of the first »bloody Senate« Freisler had been determined from the very beginning of the trial to pronounce a death sentence on the former police attorney Dr. BIACK. Freisler rejected any doubts about the interrogation methods of the Gestapo and there was no way to appeal Freisler’s sentence.

A report from the Salzburg jail states that at around 11pm on July 24, 1944 Dr. Franz Seywald, who had been sentenced to death two days earlier, had committed »suicide by hanging«. And furthermore that the body would be turned over to the Gestapo with a notice that Gauleiter Dr. Gustav Adolf Scheel was opposed to turning the body over to the family for burial. As a result Dr. Seywald’s survivors, his wife and three children, were denied the ability to take leave of their loved one as they desired and as their religion prescribed. It is noteworthy that on July 22nd Frau Seywald had been found innocent, and so was their 18 year old son Gottfried on October 17, 1944.

Reports from the Salzburg State Court jail indicate that Dr. Karl BIACK had been denied the right to attend Sunday services and that this Catholic opponent of the Nazi regime had been allowed to read only the daily newspapers [i.e. the Nazi press].

On September 11, 1944, the day before his 44th birthday, Dr. BIACK was taken in chains from the Salzburg jail to the Munich-Stadelheim prison, where he was guillotined on November 7, 1944. After the liberation of Austria in 1945 Dr. BIACK’s survivors finally received a copy of the farewell letter he had written to his wife that the Nazi authorities had never sent:

Still totally shocked by the decision that I really hadn’t expected, I devote the last lines I will write in this life to parting from you. During my imprisonment I have prayed endlessly, but God has decreed that I must die without seeing you again. I would have liked to live with you. I was so happy with you. You, my only darling and my dearest children, you have dearest in the world for me. Beloved Trude remain strong and raise my children in piety and make them to be upright people. Don’t forget your father and pray for his soul so that we may be happily reunited in heaven. All my moveable and real estate belong to you and the children. Give my siblings a memento from me. My heart is so heavy, it is so hard to part from you, but I have just done my duty and lived for them and for you. I forgive everyone, even those who made me look so bad to the authorities, otherwise I can’t understand how this could have come about. I simply can’t believe that such a thing is possible.
My dearest, I thank you for your great love. God give you the strength to get through this horror. Cross the children every evening and give them many, many kisses from me too. I’ll bless you from heaven, where I hope to come. Now live well my dearest, my only dearest. You are my only darling and my dearest children that I so heartily enjoyed. My beloved God, I bring you this, the hardest sacrifice of my life, in hope of eternal happiness. God give me the strength to die honorably. I have a clear conscience and that may be a consolation for you! The Lord be with you, are loved, pray, pray, pray and have always loved you,
With heartfelt love and blessings, your father and husband.

Dr. Rudolf Hanifle and Diploma Engineer Albert Schmiedinger were each sentenced by Freisler to seven years imprisonment, Dr. Max Platter and Dr. Josef Tinzl to five years each, the wives Maria Hanifle and Edeltraud BIACK were sentenced to three and two years imprisonment respectively, the wives Barbara Platter and Margarethe Seywald and the Seywalds’ son Gottfried who were pronounced innocent and released, all survived the terror years and received victims’ compensation after Austria was liberated.

In March 1948 the Salzburg Federal Police Commissioners commemorated their associates who had fallen victim to the Nazi terror. Since then the name Dr. Karl BIACK has appeared on a memorial tablet in the Police headquarter (then on the Churfürststraße, today the Alpenstraße). In 1977 the Federal President awarded him posthumously the Cross of Honor for service in the liberation of Austria. The widow Edeltraud Biack, who was recognized in liberated Austria as a »Victim in the struggle for a free and democratic Austria« died in Salzburg in 2001. 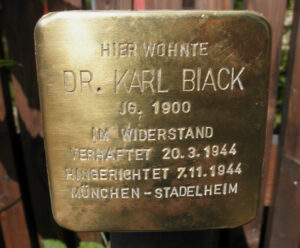 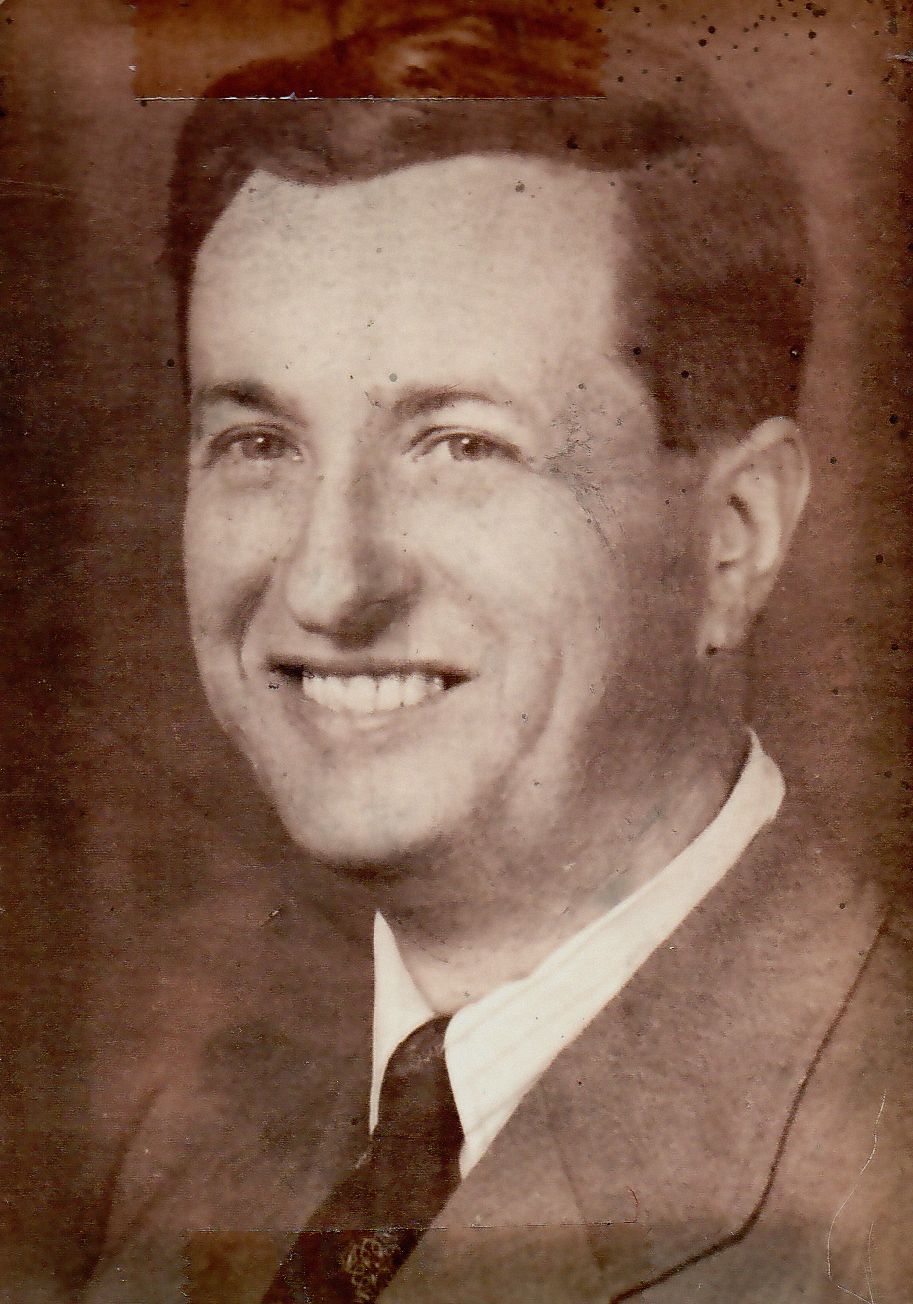 All stumbling stones at Prälat-Winkler-Straße 7