August STRASSER was born in Gnigl (which was then an independent community but is now part of the city of Salzburg) on June 22, 1895.

He was an unmarried Catholic laborer from a railroader family that had settlement rights in Gnigl under the old Austrian laws, but he lived in the Schallmoos district of Salzburg by the 1940s.

He was arrested during the war year 1944, apparently after having been denounced as a homosexual. He wasn’t counted among those who were prosecuted though as his name doesn’t appear in the registers of the Salzburg Provincial Court.1 On August 26, 1944 he was deported from the Salzburg jail to the Mauthausen concentration camp without any judicial procedure and he was registered there as a homosexual.2

On February 7, 1945 the 49 year old August STRASSER, prisoner number 91397, was murdered in Mauthausen – »Acute colitis, poor circulation«, a cause of death inconsistent with reality.

His death is noted in the city of Salzburg Police register.

1 Under the Nazi regime the Salzburg Provincial Court saw proceedings against 338 people, including six women, under § 129 I b of the still valid Austrian Criminal Code – »fornication against nature with persons of the same sex«

2 Prisoner type § 175: the paragraph of the Criminal Code of the Third Reich which criminalized homosexuality. 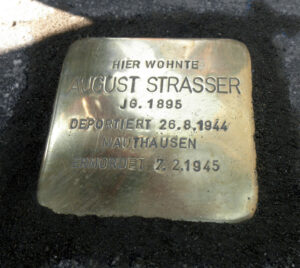 All stumbling stones at Vogelweiderstraße 93