Pauline GASSNER was born in Salzburg on July 3, 1916 and was the first of the three children of the Catholic couple Marie and Andre GASSNER. After the separation of her parents when she was still young Pauline stayed with her mother at 13 Müllner Hauptstraße.

Pauline needed nursing care and was unable to learn a trade. In October 1936 she was admitted to the Salzburg State Asylum. She was one of 29 patients who were deported from there to the Hartheim Castle killing center near Linz on April 18, 1941 — where they were all murdered. As with all the other victims of the Nazis’ secret »T4«1 program, the death of 24 year old Pauline GASSNER was not recorded in the Salzburg police registration files. Her mother died in Salzburg at age 88. 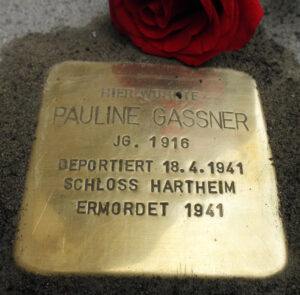 All stumbling stones at Müllner Hauptstraße 13