In March 1947 a newspaper article was published about the Nazi mass murder of the handicapped and the unprecedented civil courage of Sister Anna Bertha KÖNIGSEGG:

… The »Moving Deaths Ahead« program [colloquially known as T4] was carried out under extreme secrecy with the threat of severe punishments for anyone who exposed it. The people grumbled, the relatives lamented. But there no warning voice came from the medical establishment against this brutal mockery of human rights. Only a nun, the supervisor of the Sisters of Mercy in Salzburg, Countess KÖNIGSEGG, ventured to write a valiant letter to the Reich Defense Commissioner of Military district XVIII [Gauleiter Friedrich Rainer]. That led to her being imprisoned and expelled from the region.
Karl Engl – Salzburger Nachrichten, March 11, 1947, p. 3

But only in 1988, fifty years after the celebrated »Anschluss« of Austria by Nazi Germany, did Salzburg finally honor this unique woman who stood up against the masters of the Nazi regime: by naming a street in the Gnigl district the Anna-Berta-Königsegg-Straße – a tiny 35 meter long dead end street on the edge of the Festspiel City.

And even then the initiative came from a local resident and not the Salzburg city council. Salzburg’s streets and squares were already named after prominent individuals – 45 of whom had made careers under the Nazi regime that were later and are still now minimized or covered up. But who, except the researcher, is interested in that these days?

At present, only one street sign is publically controversial: the Josef-Thorak-Straße – a prominent name because Josef Thorak’s reputation as »Hitler’s favorite sculptor« made the connection unforgettable. But we need to pay attention to why he was Hitler’s favorite. In order to purify the »German race« Hitler ordered the murder of around 200,000 patients at the beginning of the Second World War and he saw his racial ideal, the »healthy Aryan type«, symbolized in Arno Breker’s and Josef Thorak’s monumental figures.

Since the 1950s Thorak’s Nazi-era showpieces have continued to be on display in Salzburg’s spa-garden next to the Mirabel Palace – but given the controversy perhaps not for much longer.

» …Those in darkness are not seen« (Bertolt Brecht): unimportant people, especially sick ones, thus the weakest of the weak and many left unnamed until now. One of them, for example, was Josef Seebrunner, who was a pupil in Salzburg’s Edmundsburg reform school at the same time as Josef Thorak towards the end of the 19th century.

But this Josef had to be cared for, first by the Sisters of the Cross, then as a patient in the Salzburg State Asylum [now the Christian-Doppler-Clinic] in Salzburg and after 1928 as a patient in the Schloss Schernberg nursing home in Schwarzach im Pongau – which was operated by the Merciful Sisters of St. Vincent de Paul led by Anna Bertha KÖNIGSEGG.

When, in her capacity as Supervisor of the Province of Salzburg, Sister Anna Bertha KÖNIGSEGG was informed about the murderous plan of the Nazi regime to eliminate those too sick and handicapped to work, she bravely protested against it. She knew that the diagnoses of the »Euthanasia« doctors – »feeblemindedness«, »Schizophrenia« & et cetera – were death sentences so she instructed her fellow nuns to refuse to refuse to cooperate in any way with the transfer of their patients.

Her Schloss Schernberg co-workers were able to hide 17 patients, and thus saved their lives. Anna Bertha KÖNIGSEGG herself was arrested and held prisoner by the Gestapo from April 16, 1941 to the middle of August – the time span during which her patients were sent on death transports to the Hartheim killing center outside the city of Linz.

The names of the Schernberg patients are on the death list from April 21, 1941. One of them is that of Josef Thorak’s former co-resident in the Edmundsburg who was unable to work and was especially endangered because he was a public charge: Josef Seebrunner was the son of a railroader who born on July 12, 1889 in switch-caretaker’s house number 42 in Schlaming bei Pfarrwerfen, his father’s work site at the time. He had local citizen rights in Straßwalchen where he was on the poor roll. Josef Seebrunner was one of the 123 patients from Schernberg gassed in Hartheim.

Little is known about the machinery of murder and what little is known was provided by the murderers themselves: a pile of ashes put into round tin urns with numbers stamped on their lids, names, dates of birth, death and cremation – horrible products, which the German Reich postal system had to deliver to the bereaved, if their addresses were known. Hartheim as the place of death, along with dates and causes of death invented by Hartheim’s murder personnel were then entered in some baptismal registers.

Even pastors in rural communities could therefore guess the worst. We know that, pastor Franz Dürnberger in Gnigl held a mass for some victims, which led to the brave pastor being sent to the Dachau concentration camp. He survived, but was never honored for his moral courage.

The murderous »secret T4 program«, named after its Berlin headquarters at Tiergartenstraße 4, was shut down shortly after the invasion of the Soviet Union in June 1941 – thanks not least to the protests of high ranking Catholic clergy, though the nun Anna Bertha KÖNIGSEGG was silenced. Hartheim’s murder technicians then moved on to develop the extermination machinery and camps for the Holocaust.

Anna Bertha KÖNIGSEGG, who had been born in Königseggwald (Württemberg) on May 9, 1883, was banned from »Reichsgau« [a Nazi designated region or district] Salzburg after her release in August 1941and confined to her home in Königseggwald.

She was only allowed to return to her Salzburg convent at 1-3 Salzachgässchen after the liberation of Austria in 1945. She died there on December 12, 1948 at age 65. 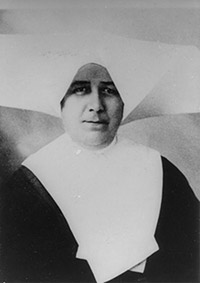 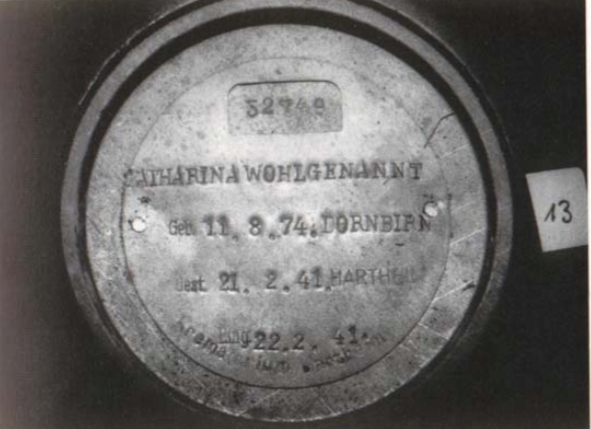 The cover of a cremation urn from the Hartheim/Linz »Euthanasia« Center. It shows the name, date & place of birth, and the death & cremation dates (the latter two were often fictitious) of a victim at Hartheim.
Source: www.erinnern.at 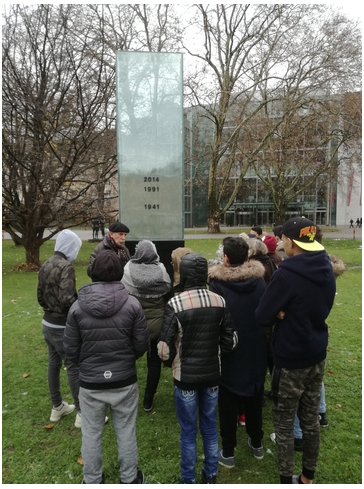 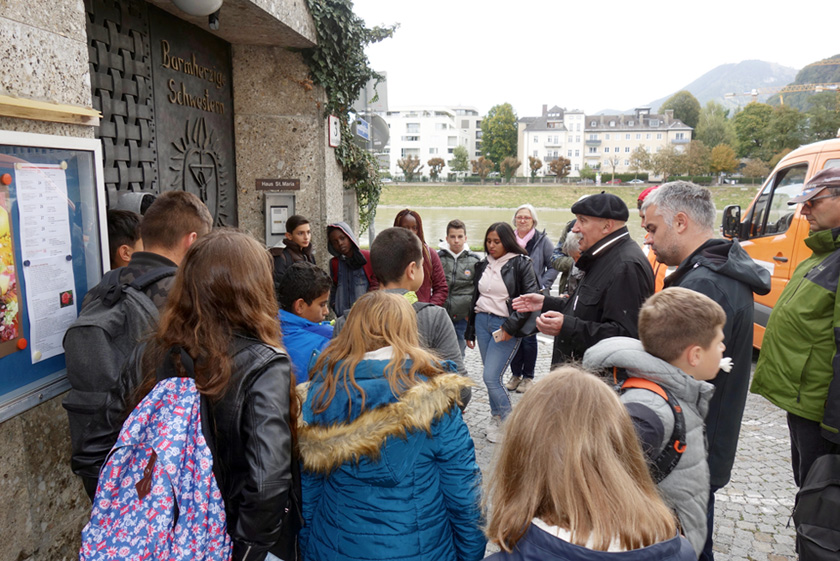 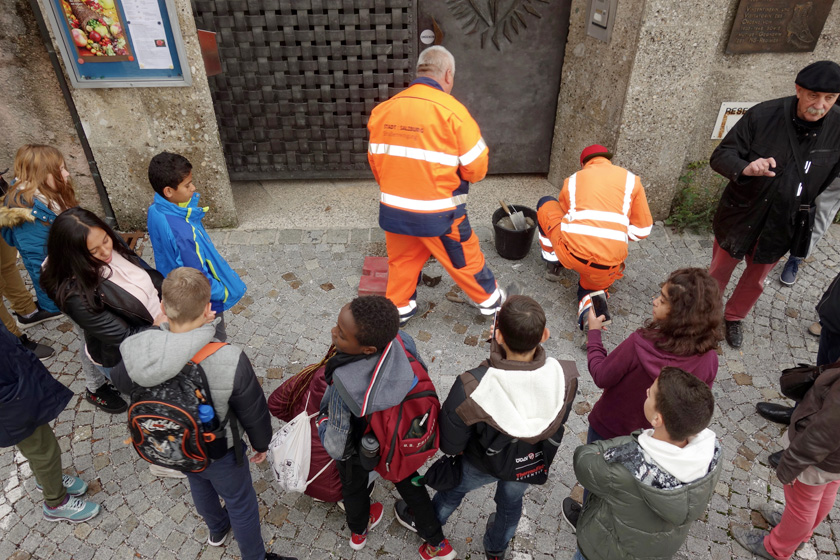 All stumbling stones at Salzachgässchen 3