Rosa ENGLÄNDER was born in Salzburg on März 6 1896 as the third child of the Jewish couple Gisela und Theodor Engländer.

Gisela Engländer, née Pollak, was a milliner and continued to live in Salzburg with her three minor children Henriette (Henny), Felix and Rosa. They lived on the fourth floor of 17 Griesgasse.

On April 20, 1914 Rosa’s 20 year old brother Felix died. In 1920 their older sister Henny, who was a milliner like her mother, married Max Moses Neuwirth. He was a member of the Ornstein family that had a large clothing shop in the Getreidegasse. Henriette Neuwirth gave birth to a daughter on April 21, 1921, two weeks after the death of her mother Gisela Engländer.

Henriette named her daughter Gisela, after the grandmother who had just been buried in Salzburg’s Jewish cemetery in Aigen. Gisela Engländer’s gravestone was destroyed when the Nazis took over in Salzburg.

Both sisters, Rosa and Henny, were milliners and lived in Salzburg until the terror year 1938: Rosa remained single and continued to live at 17 Griesgasse 17, while Henny lived with her family at 33 Arenbergstraße.

Henriette Neuwirth was deported from Vienna to Poland with her daughter Gisela on March 12, 1941 – where they were murdered, either in a ghetto or the Treblinka extermination camp (see their Stolperstein entry for 33 Arenbergstraße).

Rosa Engländer had converted to Lutheranism before 1938, but knowing that it wouldn’t help her with the Nazis she fled to Prague, presumably to join her father Theodor Engländer (whose fate is unknown). That was only a temporary escape from the Nazis however, and the 45 year old Rosa was deported from Prague to Lodz on November 3, 1941.

The Shoah databank at Yad Vashem lists Rosa Engländer as Ruzena Englaenderova (which is the Czech version of her name). 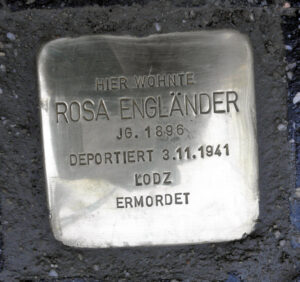 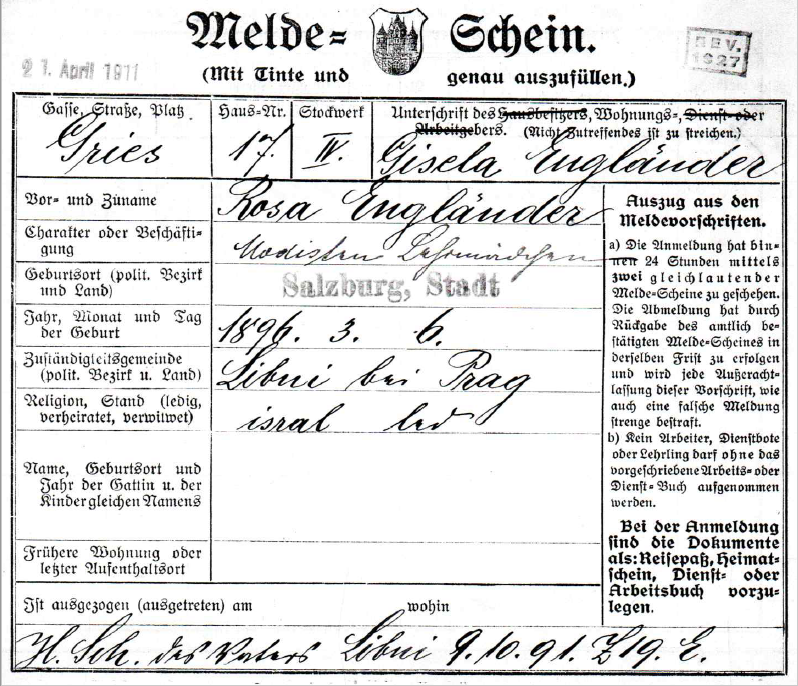 All stumbling stones at Griesgasse 17