Valentin AGLASSINGER was born in St. Pantaleon (near Braunau in Upper Austria) on February 14, 1886. He was a married railroader active in his trade union and the Social Democratic party – which he represented in the Gnigl town council until the suspension of Austrian democracy in 1934 (Gnigl is now part of the city of Salzburg, but was then an independent town with a social-democratic mayor).

He and his wife Anna had lived at Turnerstraße 10 in Gnigl since 1920. AGLASSINGER wasn’t prominent in the resistance movement against the Nazis but was known for his political opinions and his financial support for sick colleagues. On March 15, 1943 he was arrested and charged with »conspiracy to commit treason«, but he was acquitted on January 19, 1944.

Despite the acquittal he was kept in jail until April and then, on the 19th, he was transferred to the Dachau concentration camp. He was murdered there on February 7, 1945 – shortly before his 59th birthday and less than three months before the camp was liberated by US troops.

His wife Anna died in Salzburg in 1947. A street in Gnigl was named after Valentin AGLASSINGER in 1947. 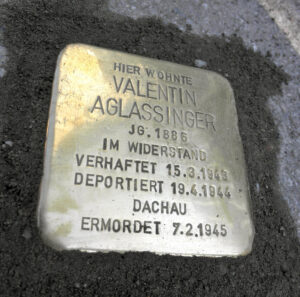 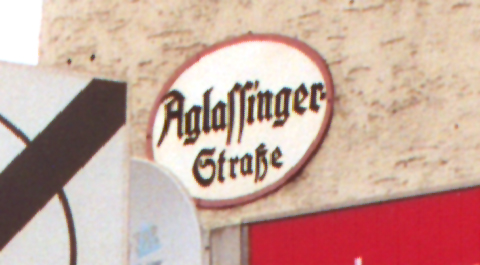 All stumbling stones at Turnerstraße 10