Nikolaus SCHWARZ was born in Fließ, in the Tyrolean district of Landeck on February 28, 1898. He was an unmarried Catholic who had worked for the Austrian Railroad (ÖBB) since 1922. In 1934 he was promoted to inspector in Kirchberg in Tirol and after the German annexation of Austria in 1938 he was made a technical inspector for the German National Railroad that absorbed the Austrian Railroad system. As a patriotic Austrian who had volunteered for service in the Austro-Hungarian army during WWI he publicly rejected German rule and was demoted twice: from Kirchberg in Tirol to Bruck on the Großglocknerstraße deep in the high Alps and finally to the job of camp guard in a German National Railroad camp in what is now the Parsch district of Salzburg (though at the time it was not yet part of the city of Salzburg) where POWs were used as forced laborers.

The demoted railroader Nikolaus SCHWARZ had hardly been in the Parsch camp for two weeks when a Gestapo officer searched his room on April 7, 1943 and found a document in German with a French translation. It turned out to be a call for an armed uprising that would be joined by the French POWs. It began with the words:

Comrades! Like you we Austrians have had the misfortune to fall under the Nazi and Hitler bandits. I know that we are of the same mind and the bandits have now punished me with a transfer for the second time.

Even the Nazi authorities knew that an armed uprising by POWs was impossible in a camp that had no weapons depot, but the mere suggestion was enough for an indictment by the Nazi regime. Nikolaus SCHWARZ, who had been jailed since April 7, 1943, was brought before a court in Salzburg. On December 2nd and 3rd 1943 the 6th Senate of the Berlin »People’s Court« led by Hermann Granzow held two trials in the felony courtroom of the Salzburg State Court. On December 2nd two German soldiers, Johann GRABER and Otto HORST, were sentenced to death for »conspiracy to commit treason«. It was the same court that sentenced the civilian Nikolaus Schwarz to death for »treasonably aiding the enemy« on December 3rd. This § 91b of the civilian criminal code under the Nazi regime was comparable to what the Military code called »treason in time of war«.

On February 10, 1944 the 45 year old Nikolaus SCHWARZ was executed with a guillotine in the Munich-Stadelheim prison. Any surviving relatives are unknown. 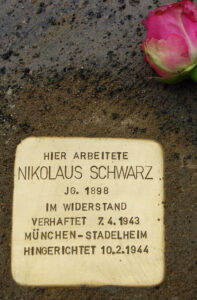 All stumbling stones at Fürbergstraße 45