Max KÖHLER was born in Lackenbach, one of the »Seven [Jewish] Communities« in the Esterhazy owned Hungarian border region alongside Austria, on March 6, 1867. Max was the youngest son of the Jewish couple Leopold Kohn and his wife Lotti, neé Glaser – so he was Max Kohn for decades before he officially changed his family name after he arrived in Salzburg.1

In 1883 his older brother Adolf Kohn2 established himself as a master tailor and businessman in Salzburg. He founded a firm called Adolf Kohn & Co and set up a shop called the »Men’s Clothing Salon« [Herren-Kleider-Salon] at 20 Linzer Gasse. Max went to work for his brother and became a master tailor and partnered for a while in the business. Then he got his own business permit and towards the end of the 19th century he opened his own shop – first in rented quarters at 4 Linzer Gasse, and later as the owner of the nearby 5 Dreifaltigkeitsgasse. His business flourished in the prosperous Austro-Hungarian Monarchy of the years before the First World War. He even opened a second store in Bozen (in South Tyrol, which was part of Austria-Hungary until it was given to Italy after WWI).

In 1896 Max KÖHLER married Hermine Feigelstock-Feri who had been born in Vienna on December 4, 1876. Hermine was the daughter of the Jewish couple Samuel Feigelstock-Feri and his wife Betti Feigelstock-Feri, neé Deutsch. The couple Hermine and Max KÖHLER became owners of half of 5 Dreifaltigkeitsgasse on June 26, 1900. Their son and heir Leo KÖHLER was born in Salzburg on August 5, 1897 and learned the trade of his father. Leo married the Vienna Jew Martha Werner in 1922 and their daughter Gertrude was born in Salzburg on August 11, 1923. Both Max and Leo KÖHLER served in the leadership of Salzburg’s official Jewish Community [der Israelitischen Kultusgemeinde] and their families had formal local citizenship rights in Salzburg under Austrian law – until their violent expulsion in 1938.

In the pogrom night of November 9-10, 1938 [the so-called Reichskristallnacht pogrom] the Salzburg Gestapo, led by Chef SS-Sturmbannführer Karl-Heinz Rux, arrested the heads of Salzburg’s Jewish families and 26 of them were deported to the Dachau Concentration Camp, including the 41 year old Leo KÖHLER. In order to get released from the concentration camp they had to sign over their property for »Aryans« and promise to leave Germany (which had annexed Austria) in short order.

Leo KÖHLER was released from Dachau on November 20, 1938 and went to Vienna where his parents, his wife and his 15 year old daughter were waiting. But they soon separated. Leo’s immediate family seems to have gotten a visa for Great Britain and Leo’s wife Martha and daughter Gertrude left for London in January 1939. But Leo KÖHLER was unwilling to leave his endangered parents behind so he fled with them to Italy. At first they lived in South Tyrolean Meran and later in Bologna. Research indicates that at age 47 Leo KÖHLER was deported from German occupied Italy to either Bergen-Belsen or Auschwitz, where he was murdered.

His parents, on the other hand, survived to experience the liberation of Italy. Max KÖHLER died in Bologna at age 80 on January 12, 1947. His widow Hermine KÖHLER then moved to join her daughter-in-law and granddaughter in London. In the 1950s Martha and Gertrude KÖHLER (KOHLER) left her behind when they migrated to the US as British citizens.

Finally, it should be noted that the property at 5 Dreifaltigkeitsgasse, sold under duress to Alois Mauracher Senior and Junior in 1938, was never restituted. The lawyer Dr. Valentin Gelber, as legal representative of the widow Hermine KÖHLER, was able to win some financial compensation for her 1948 restitution claim. In 1959 Hermine KÖHLER died in London at age 82. 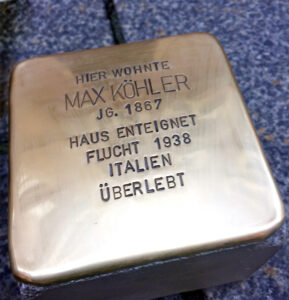 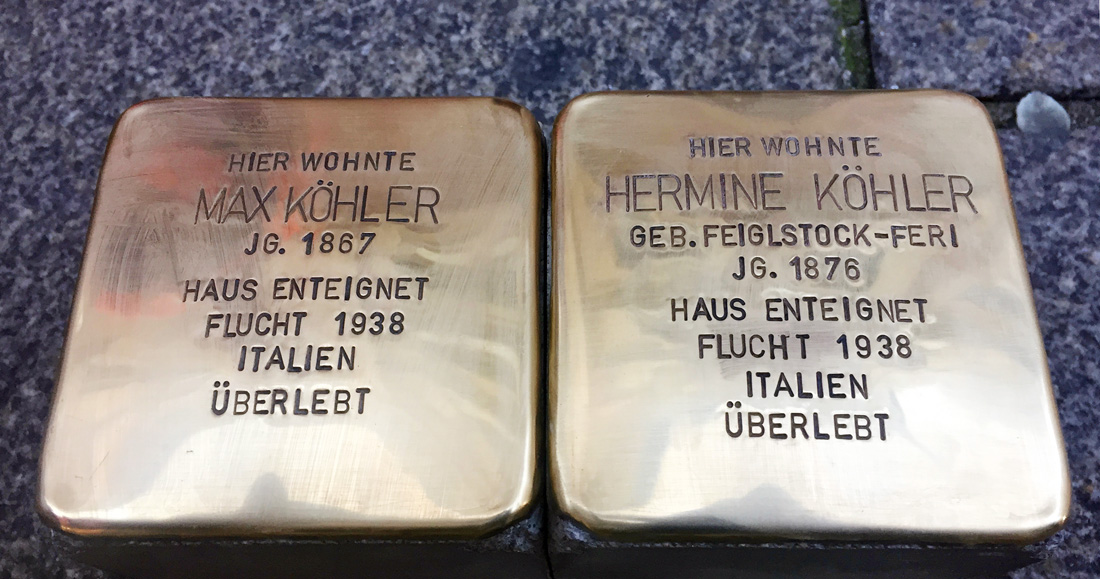 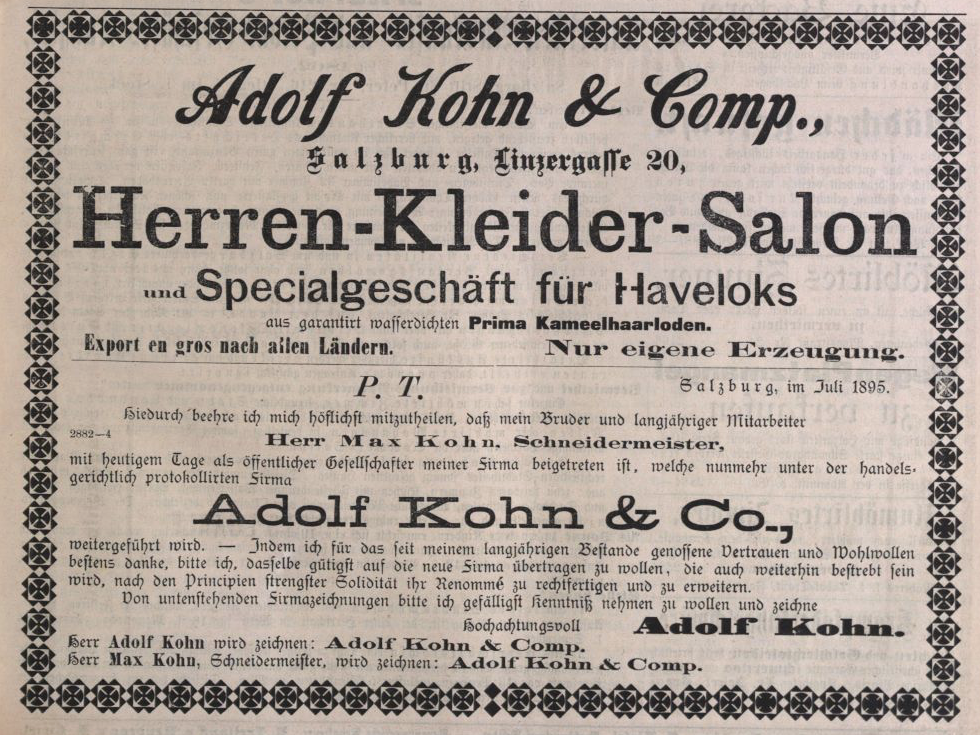 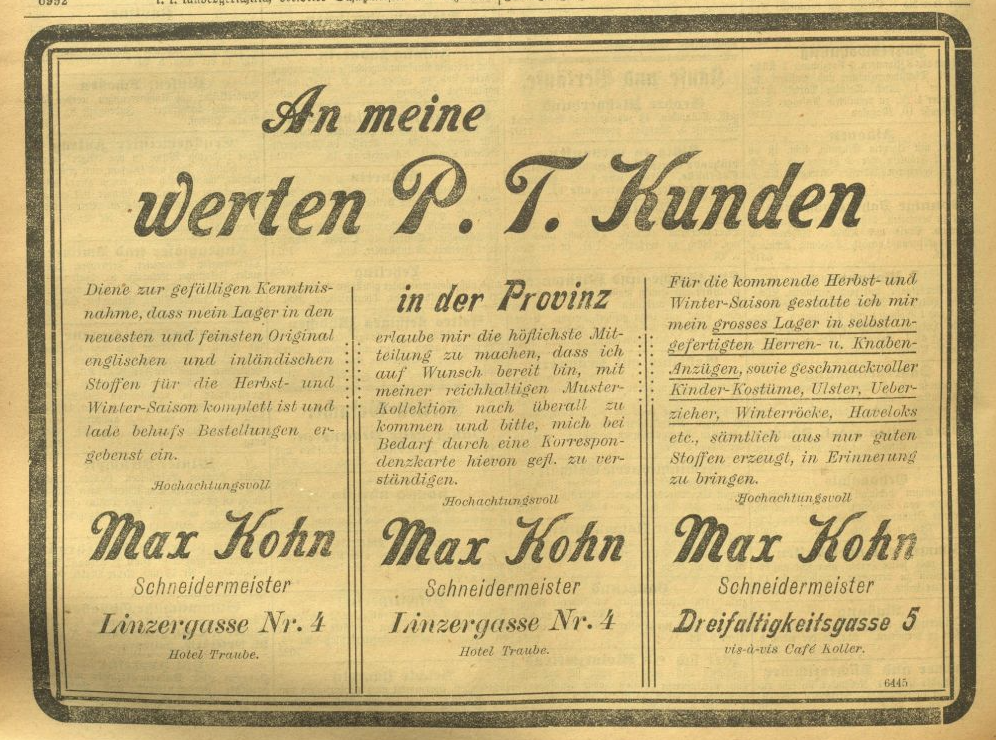 All stumbling stones at Dreifaltgkeitsgasse 5