Paul WITTGENSTEIN was born in the Habsburg capital and imperial residence Vienna on November 5, 1887 and was baptized in the St. Stephen’s Cathedral parish church on November 27, 1887.

He was the seventh of the eight children of Karl Wittgenstein and his wife Leopoldine, neé Kallmus, who had gotten married in that same church in 1874.

Both of Karl’s parents had converted from Judaism to Christianity, as had Leopoldine’s father – only Leopoldine’s mother had no Jewish ancestry, but that meant that Karl and Leopoldine’s children were in non-Jewish by the traditional reckoning of both the Christian and Jewish faiths (though the Nazis would take a different approach in the 20th century).

Wittgenstein Senior was one of the most successful industrialists of the Habsburg monarchy, a millionaire who lived in a city palace with his family and was dubbed »the American« with awe or envy.

When he died in 1913, the public was informed of his solemn consecration in the Lutheran City Church. That meant that he had become a Lutheran Protestant (Augsburg Confession). His wife was Catholic, as were their children, at least by baptism – »an early assimilated Jewish family« according to the narrative of his non-Jewish posterity.

On December 1, 1913 – after the death of the patriarchal father – Paul WITTGENSTEIN made his debut as a pianist in the Vienna Music Association’s Great Hall, and got only mild reviews from the city’s music critics.

In August 1914, at the very beginning of the First World War, he was seriously wounded as a lieutenant in the Austro-Hungarian army on the Russian front and his right arm had to be amputated.

Even before he was released from a Russian POW camp he started preparing to continue his musical career by soliciting a concerto for the left hand from his former piano teacher Josef Labor.

After his release from the POW camp he restarted his career even before the end of the World War, but now as a »left-handed pianist«. The 29-year-old made his one-armed debut on December 12, 1916 in the Music Association’s Great Hall with Frédéric Chopin’s C minor Nocturne, but this time he was admired by Viennese music critics:

… Only with expressions of the greatest admiration can one speak of Paul Wittgenstein, the brilliant pianist who lost his right arm in the war and who has now taken to the technical training of his left hand with unrivaled perseverance and energy. He has now mastered this in such an unheard-of way that one hardly notices in the highly musical, well-groomed piano playing that it is performed with only one hand.
The young hero deserves unlimited praise for his rendition of Chopin’s difficult C minor nocturne, a piece on which many minor, but also many great two-handed pianists usually fail. […] K-r.
Der Morgen. Wiener Montagsblatt, December 18, 1916, p. 4

It is astonishing that Paul WITTGENSTEIN was already a legend during his lifetime as a »left-handed pianist«, and far more popular than his younger brother Ludwig, the now world-famous philosopher of the »Tractatus« – Paul and Ludwig, a very different pair of brothers.

The independently wealthy Paul WITTGENSTEIN commissioned many of the 20th century’s leading composers to write pieces especially for him. It is also said that Paul WITTGENSTEIN did not perform left hand works that had been specially written for him, if he thought they seemed too modern.

And because he had contracted for them with the proviso that he had exclusive performing rights for them during his lifetime that meant that some pieces, like Hindemith’s Piano Music with Orchestra Op. 29, went unplayed and sometimes even unknown for many decades [the Hindemith piece was only discovered in WITTGENSTEIN´s study after his widow died – many decades after both WITTGENSTEIN and Hindemith had died].

Critics accused him of having a »backward taste in music«, but that criticism was not to be expected at his appearances in the Mozart and Festival City of Salzburg, since the local audience that set the tone here wasn’t shy in attacking »atonal« music.

Bernhard Paumgartner, the director of the Mozarteum and head of the Salzburg concert community, gave these critics an occasion to vent their displeasure about such music when he performed Alexander Scriabin’s Le Poème de l’Extase in the Mozarteum on December 7, 1926:

On October 11, 1927, there was no modern or twelve-tone work on the program, but rather a composition by Erich Wolfgang Korngold, a more traditional contemporary composer. His Piano Concerto for the Left Hand in C sharp minor (op.17) was performed brilliantly by the dedicatee Paul WITTGENSTEIN in the Mozarteum:

The first concert of the Concert Association. At the center of the program is a small sensation for Salzburg: Korngold’s piano concerto for the left hand with Paul Wittgenstein on the piano. We know how the artist, who lost an arm in the war, developed the pianistic technique of his left hand with astonishing energy. The force for example of his little finger!
How can the bass boom!
The decompositions rush down like curtains, the thumb conveys the soft cantilena, and a virtuoso accuracy lets the chords in all positions, above, below, in the middle grasp almost at the same time. And Korngold, who dedicated the concert to the artist, pushes technique to the limit in terms of harmony and the composition of the sounds. […] Otto Kunz
Salzburger Volksblatt, October 12, 1927, p. 5

In a sharp contrast, the American pianist Oscar Ziegler had to cope with an audience boycott in the summer of 1928 when he dared to play Arnold Schönberg’s 16-minute piano suite (op. 25) in the Mozarteum. The Salzburg premiere of the twelve-tone work that Schönberg had composed after he had been expelled from the Antisemitic summer resort of Mattsee (23 kilometers north of Salzburg) in July 1921 was simply ignored by the local German-national and Christian-social press – »Don’t even ignore it«, says an educated Austrian when he wants to subject a thing or person with the greatest possible degree of contempt.

Contemporary music took a long time to come to the Summer Festivals. When the American conductor Artur Rodzinski gave a gala Philharmonic concert in the Mozarteum on August 16, 1936, the Vienna music critic Fritz Deutsch wrote an illuminating article on contemporary music that was neither new nor modern and therefore could not provoke any conservative listener to express disapproval:

Finally: ‘contemporary’ music in Salzburg too! This concept of contemporary, as it is used in the fifth Salzburg Philharmonic Concert, allows us to look further and deeper into modern work than the narrow horizon so far which is in the present but is actually looking towards the past and confuses second rate following with a further development of the compositional tradition …
And none of the sometimes very conservative listeners in the Mozarteum hall needed to shake their heads in confusion over contemporary music as shown in the works of the young or traditional Vienna composers Wilhelm Jerger and Franz Schmidt …
Neues Wiener Journal, August 18, 1936, p. 11

The critic Fritz Deutsch did not know that the young Vienna composer Wilhelm Jerger, whose Partita was performed by the Vienna Philharmonic under the direction of Rodzinski, had been a Nazi since 1932 and an »illegal« (that is a member of the outlawed Nazi party) since 1933.

And of course nobody could have known in 1936 that Wilhelm Jerger would be promoted to oversee the Vienna Philharmonic under the Nazi regime and that his composition Salzburg Court and Baroque Music would be premiered in the Mozarteum at the Salzburg Festival of 1939.

The much older composer Franz Schmidt wasn’t a Nazi, but he was a supporter of the »Anschluss«, the Nazi German annexation of Austria in 1938. In that same year he completed two commissioned works for Paul WITTGENSTEIN. He died in February 1939 before he was able to complete his German Resurrection commissioned by the Nazis.

Compliance with the Nazis was never completely unknown, but in the summer of 1936 one could still hear contemporary compositions in Austria that were prohibited across the border in Nazi Germany.

In the festival city they appreciated it when the American conductor Artur Rodzinski conducted works by Isaac Albéniz, Dmitri Shostakovich, Igor Stravinsky, Wilhelm Jerger and Franz Schmidt in the Mozarteum.

… One of the most famous pianists of Vienna sat at the piano, the one-armed Paul Wittgenstein – elegant music from an inner voice, with a clear, poetic tone.
Salzburger Volksblatt, August 17, 1936, p. 9

… Like Richard Strauss, Franz Schmidt wrote concert variations on a theme by Beethoven for piano (left hand) for the eminently musical pianist Paul Wittgenstein, to whom fate only gave a left hand. It does not need to be emphasized that the artist for whom this ingenious work is intended is also the ideal interpreter for it.
Salzburger Chronik, August 17, 1936, p. 9

In March 1938, even before the »Nuremberg Race Laws« came into force in Austria, Paul WITTGENSTEIN was expelled as a piano teacher from the Vienna Conservatory.

It is also known that he had two children with Hilde Schania, who was 27 years his junior and a former piano student: Elisabeth (born 1935) and Johanna (born 1937).

The still unmarried couple and their two children managed to travel to Cuba. Hilde and Paul WITTGENSTEIN got married in Havana on August 20, 1940.

In February 1941 the family was able to move on to the USA. Their third child, Louis, was born in New York on November 30, 1941 and Paul WITTGENSTEIN gave piano lessons again.

It is said that he fell out with his family members who remained in Austria because they did »business« with the Nazis, and that they never reconciled, but it appears that Paul’s two sisters who remained in Austria were allowed to live in peace in their Vienna palace only because the family transferred most of the family’s large holdings outside Germany (said to be worth billions of dollars) to the Nazis in exchange for their lives.

His much younger wife Hilde survived him by four decades and died in the US in 2001.

While the other Wittgenstein children remained in the US like their parents, their New York born son Louis moved to Austria and lived as a painter in Thumersbach near Zell am See.

In 1982, Thomas Bernhard’s story, Wittgenstein’s nephew, was published about the author’s friendship with another Paul Wittgenstein (1907-1979), a nephew of the philosopher Ludwig Wittgenstein and his older brother Paul, the left handed Pianist who is long forgotten.

Paul WITTGENSTEIN´s name appears no place in public in the city where he once worked. 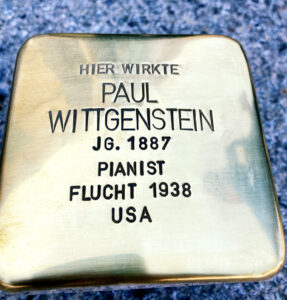 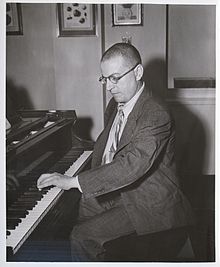 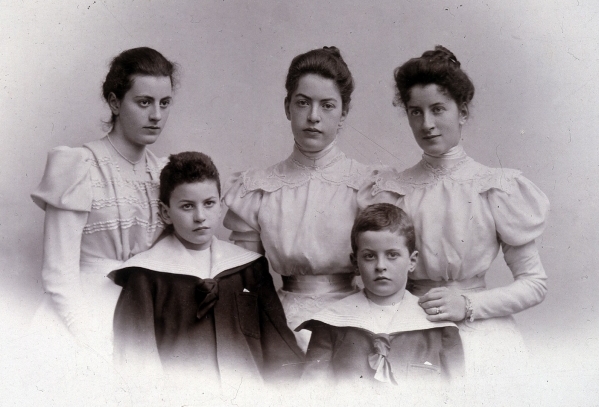 Paul and Ludwig, the now famous philosopher in the 1890s
Source: wikipedia.org