Leopold NOBIS was born in Überackern (near Hitler’s birthplace in Braunau am Inn) on November 10, 1881 and was baptized in the Roman Catholic Church. He was the son of the carpenter Anton Nobis and his wife Maria.

Leopold NOBIS left few signs of his existence in Salzburg although he certainly had local citizenship rights in the city. It’s clear that he remained unmarried and was a master tailor whose last residence was at 4 Ursulinenplatz before he was admitted as a patient in the Salzburg State Asylum in January 1924. At that point he was declared unable to work, which later became grounds for his murder by the Nazis.

On April 17, 1941 Leopold NOBIS was one of 82 patients deported from the Salzburg State Asylum to the Hartheim Castle extermination center near Linz – where they were all murdered. As with all of the victims of the Nazis secret »T4«1 extermination campaign the death of the 59 year old Leopold NOBIS was not recorded in the Salzburg police registration files and he left no survivors behind in Salzburg. 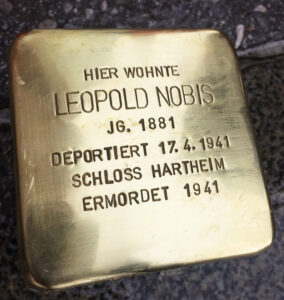 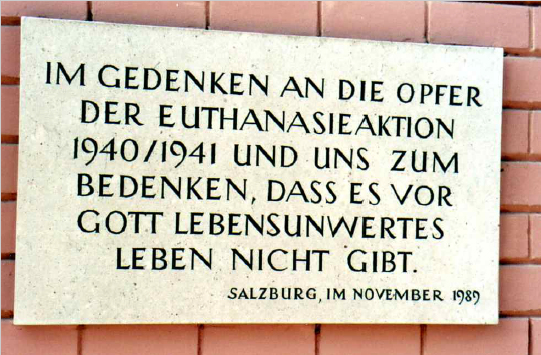 All stumbling stones at Ursulinenplatz 4