Adalbert SYKYTA was born in Gmunden, Upper Austria, on January 17, 1912 and was the youngest of the three children of the Catholic couple Emma and Bedrich (Friedrich) SYKYTA. Adalbert’s mother came from the Trentino region (which was part of the Austro-Hungarian Empire until it was given to Italy after WWI) and his father came from Prague (which was also part of the Empire until the end of WWI).

The mother and her three sons, Silvio, Friedrich and Adalbert came to live in Salzburg in 1925, and in 1936 they moved into the house that Emma SYKYTA bought at 8 Membergerstraße in the Josefiau neighborhood.

Adalbert remained unmarried and was a salesman and commercial employee. Under the Nazi regime he was declared legally incompetent and was admitted to the Salzburg State Asylum on October 26, 1939. He was one of 85 patients who were deported from there to the Hartheim Castle killing center near Linz on May 21, 1941 – where they were all murdered.

As with all the other victims of the Nazis’ secret »T4«1 program, the death of the 29 year old Adalbert SYKYTA was not recorded in the Salzburg police registration files.

His parents and both brothers survived the terror years. His mother died in Salzburg at age 80. 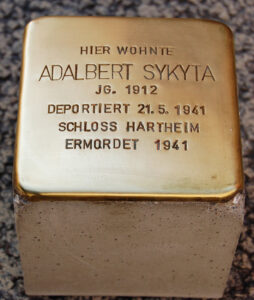 All stumbling stones at Membergerstraße 8