Alfred WEINGARTNER was born in Braunau am Inn on January 17, 1930. His parents were Franz and Rosa Weingartner. Alfred lived with his mother until 1936, from 1936 to 1940 in Stadl-Paura, and then again with his mother at 45 Siezenheimer Straße in Salzburg.

At school he did well in arithmetic and was average in reading, but because he was »impossible to integrate with the class« he was sent to the Eglfing-Haar asylum for disturbed children (and killing center) near Munich where he was registered on April 18, 1941.

Alfred WEINGARTNER died (or was killed) there on June 21, 1942 – no cause of death is noted in the records. 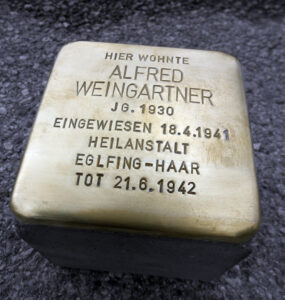 All stumbling stones at Siezenheimer Straße 45