Rudolf KINDLINGER Jr. was born in Bad Ischl, Upper Austria, on December 27, 1906. He was an unmarried Catholic butcher’s son and was the oldest of Anna and Rudolf KINDLINGER´s four children.

Rudolf was unable to learn a trade because of his severe handicap and in 1929 he was admitted as a patient in the Salzburg State Asylum. On April 17 1941 he was one of 82 patients from the asylum who were deported to the Hartheim killing center near Linz where they were all murdered. As with all the other victims of the Nazi’s secret »T4«1 program to murder the handicapped, the death of this 34 year old man was not recorded in the Salzburg city police registration files.

His family continued to live in Bad Ischl and his youngest brother Erich, who had been born in 1924, was killed fighting for the German Wehrmacht in 1943. 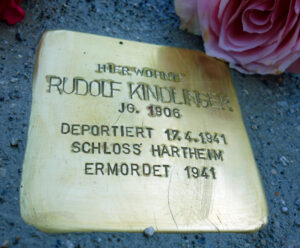 All stumbling stones at Schallmooser Hauptstraße 71