Ludwig DUNHOFER was born in Altheim (near Braunau in Upper Austria) on September 29, 1900. He was the oldest of the five children of the Catholic couple Amalia and Johann DUNHOFER. Ludwig’s father Johann was a brewer. The family had local citizenship rights in Salzburg and lived in the Mülln neighborhood (near the Mülner Brewery) before they moved to the Ignaz-Harrer-Straße in 1905. After the early death of their parents the three brothers, Ludwig, Johann and Alois, stayed in Salzburg.

Ludwig DUNHOFER was an unmarried unskilled laborer until he became a patient in the Salzburg State Asylum in March 1927. He was one of the 82 patients who were deported from there to the Castle Hartheim killing center near Linz on April 17, 1941 — where they were all murdered. As with all the other victims of the Nazis’ secret »T4«1 program, the death of this 40 year old man was never recorded in the Salzburg police registration files.

Ludwig’s brother Johann was married with children when he was killed while fighting for the German Army in the Vosges Mountains in October 1944. Their younger brother Alois survived the terror years. 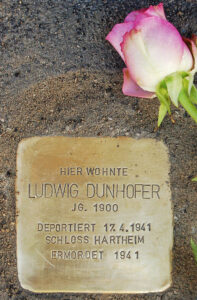 All stumbling stones at Ignaz-Harrer-Straße 45