Maria Rausch was born in Arnsdorf bei Lamprechtshausen (23 km north of Salzburg) on June 16, 1906. She was an unmarried Catholic servant who worked for the family of Aurelia and Rudolf Spängler who lived on the second floor of 13 Getreidegasse in Salzburg (according to the Salzburg police registration files).

From October 1932 on Maria Rausch was a patient in the Salzburg State Asylum. With no prospect for recovery she was considered unworthy of life by the Nazis and on April 16, 1941 the 34 year old was deported to the Hartheim killing center near Linz where she was murdered.

As with all the victims of the Nazi’s secret »T4«1 program to kill incurable and severely handicapped Germans her death was not recorded in the Salzburg police registration files. 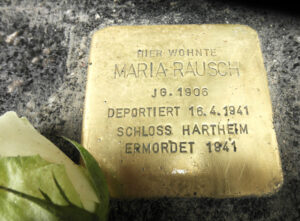 All stumbling stones at Getreidegasse 13