Regina (Rivka) GRINDLINGER, neé Bonus, was born in Horodenka Galicia (then in Austria-Hungary, now in Poland) in 1884 and she married a fellow Galician Jew named Josef GRINDLINGER1 early in the 20th century.

Josef was a Galician shopkeeper who fled the war zone during the First World War along with tens of thousands of other Galicians [given the virulent Antisemitic policies of the Russian army, Galician Jews were especially prone to flee if they could].

Josef, Regina, and their three Galician born children ended up in Salzburg and lived in the district of Morzg2 after 1918. It was there that their fourth child, Henriette was born on June 13, 1918.

After Josef’s early death in 1923 the widow Regina supported herself and her four children (Stella, Otto, Dorothea, and Henriette) as a trades-woman. They moved into the city of Salzburg and as was often the case among the poor, they changed their address frequently. The children learned trades and began to work as soon as they could.

Otto became a shop clerk and Stella an office clerk. Dorothea (called Dora, and named after her grandmother Dina) had been born in Horodenka Galicia on January 7, 1915. She became a seamstress and worked in the S.L. Schwarz department store on the Alten Markt. Henriette was still an apprentice when the family registered at their last Salzburg apartment on the third floor of 17 Judengasse in November 1935.

All of the family members who had to work to support the family lost their jobs after the Nazis took over Salzburg and shortly after the »Reichskristallnacht« pogrom of November 1938 they were expelled from Salzburg to Vienna. Regina’s son Otto was rounded up with the other Jewish men of Salzburg on the night of the pogrom and was imprisoned in the Dachau concentration camp until November 28, 1938.

In Vienna the family was counted as Stateless persons from Poland because the Galician birthplaces of Regina, Josef, and three of their children had became part of Poland in 1918 – even though they had all left for Salzburg while Galicia was still part of Austria. They tried to get visas to emigrate to the US or Great Britain, but that turned out to be impossible for the 55 year old widow.

In April 1939 Otto, Stella, and Henriette left for England. Dorothea stayed behind with her mother rather than leave her alone in Nazi Vienna. They lived in the Leopoldstadt, the 2nd district of Vienna – first in apartment 21 at 31 Grosse Sperlgasse, then in apartment 14 at 1 Komoediengasse, and finally in apartment 16 at 22 Grosse Mohrengasse.

On September 14, 1942 the two women were deported on Transport Nr. 41/524 to the Maly Trostinec extermination center near Minsk in the occupied Soviet Union (now Belarus), where they were murdered on September 18, 1942.

Stella Grindlinger REICH wrote the memorial pages at Yad Vashem for her mother and sister before she died in San Francisco in 1983. Otto emigrated to the US in 1940 and served in the US army during WWII.

He died in Oakland California in 1976. Henriette Grindlinger KRUH stayed in England and died in London in 2008. Their descendants live in California and England.

1 Josef (Isaak) Grindlinger was born in Stanislau Galicia on July 19, 1880 and he died in Salzburg on December 23, 1923 and his grave is in the Salzburg-Aigen Jewish Cemetery).

2 Morzg was originally an area just south-west of the city of Salzburg, but it was annexed to the city between 1935 and 1939. A bit further south there was a large camp for Galician refugees in Grodig during the war and the Grindlingers probably lived in that camp before moving to Morzg. 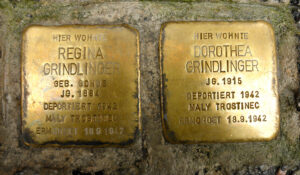 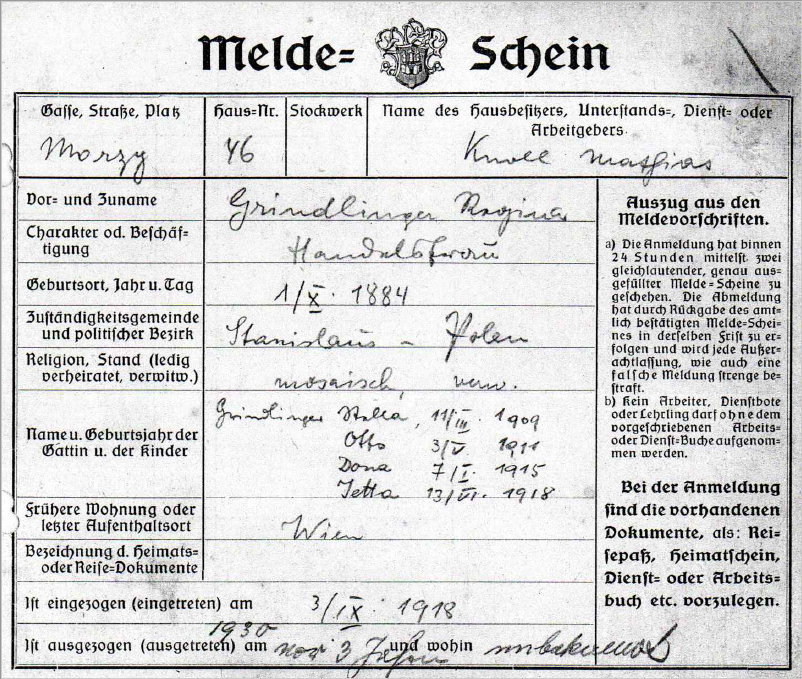 All stumbling stones at Judengasse 17